Posted on January 25, 2016 by Sandy Stott | Comments Off on Playing Snow-Storm Inspector

“For many years, I was self-appointed inspector of snow-storms and rain-storms, and did my duty faithfully …” ~ Thoreau, “Economy,” Walden

Saturday’s Big Northeastern Snow gave me a chance to go out and play storm inspector, a la Henry Thoreau.

I had already measured the snow depth in the front yard at 8 a.m. – 15.5 inches – and I had shoveled the driveway. I came back inside and did some reading and some writing. But I couldn’t stop looking out the window and marveling at the diligence of the snow. It was steady, it was piling up fast, and it was beautiful.

Finally, I couldn’t stand it anymore. I had to be out in it. And I had to prepare myself for the conditions. First I had to retrieve my snow boots from storage in my three-season writing porch. I kicked a lot of snow away from the porch door just to slip inside. Then, when I looked closer at my boots, I saw that someone else had used them. It had been so long since I needed them that a mouse had used the left boot for a home … and an outhouse. I shook out his settlement. The right one was empty and clean. Go figure.

I bundled up in my winter coat, scarf, gloves, and knit cap. I put my camera, driver’s license, and a five-dollar bill in my pocket, just in case. I hadn’t checked the batteries in the camera, though. They died fairly quickly. So I had to rely on myself to be the camera for the trek. I could pay closer attention this way. The photos could wait.

The temperature was in the mid-20s, and the wind did occasionally gust around me. But overall, I was fairly comfortable. The kitchen clock had said it was noon, but it could have been anytime outside. Everything was white and there was no sun. It had been two hours since the snowplow had come our way. And the flakes just kept falling, falling, falling. I took to the middle of the street and trudged up the block. Westward. 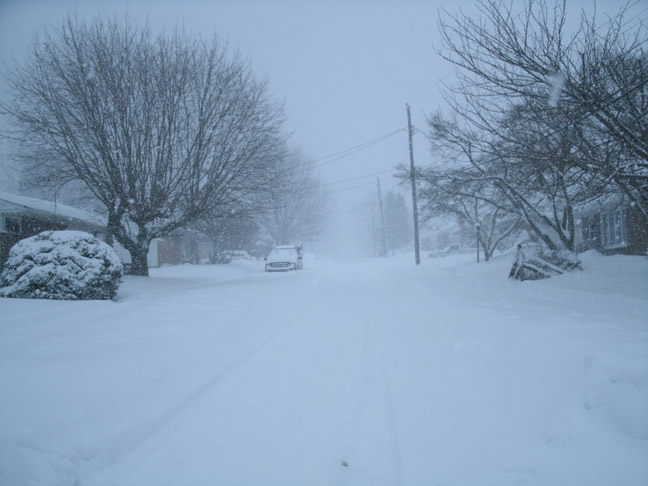 My usual dry-weather walk traces a mile-and-a-half loop through suburbia. Today this probably wasn’t practical. I decided instead to make one trip around our large residential block. Every half block, I stopped, looked, and listened. I wanted to EXPERIENCE this snowfall. The air was filled with flakes. And I was the only person out in it. I guess everyone else was inside, watching TV broadcasts and online videos of the weather-folk and giant pandas having fun in the snow. Go figure again.

Henry Thoreau didn’t happen to wear spectacles. Here he had the advantage over me. It’s difficult to inspect a snow storm when it keeps building up on your lenses. I had to wipe them off with my gloves at every turn. Then I could spot small movements. Little birds hopped on top of the snow near someone’s porch, perhaps picking up stray seed the homeowner had thrown to them. An acrobatic squirrel leaped from an evergreen tree to a branch of a snowy maple, scuttling snow from both. I knew of several bunnies who lived under certain bushes. But they were hunkered down and were hidden from view. Very much like the people in the houses just behind them. 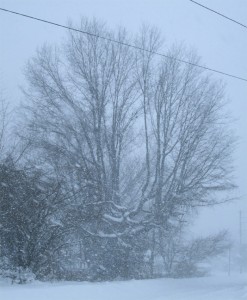 I listened. The flakes made soft whispers against my coat and on the growing drifts. Off in the opposite direction, I could hear distant beeps from equipment clearing the grocery store parking lot. The wind jostled someone’s wooden wind chimes, adding a light melody to the scene. And when I walked, I thought I heard someone shoveling the sidewalk right behind me. I turned around and saw no one. It took me a few instances of this to realize that it was the sound of my own coat scraping against itself. I laughed. Then I thought of another Thoreau quote that I had read just a few days earlier.

“As I walk the RR causeway, I am, as the last two months, disturbed by the sound of my steps on the frozen ground. I wish to hear the silence of the night, for the silence is something positive to be heard. I cannot walk with my ears covered. I must stand still and listen with open ears, far from the noises of the village, that night may make its impression on me.” ~ Thoreau, Journal, January 21, 1853

Thoreau crunched on ice and snow and was annoyed. I was distracted by my coat. To-may-to, to-mah-to. We both stopped to listen to what was mostly silence.

At the third corner, I came upon a man attending to a mini-four wheeler. It wasn’t stuck, but the motor kept cutting off. He had to get off the seat and fiddle with something to get it started again.

“Need help?” I asked, even though I know nothing of such toys.

“Nah, I’m fine,” he said. “I only live right there anyway.” He nodded to the house on the corner. I took him at his word and kept on my path. Soon I heard his high whiny motor behind me as he took off down a side street. To each, his own method of inspection.

Now I realized I had forgotten to bring along something that was vital to the adventure: tissues. My nose was running to beat the band. I ignored it as best as I could as I rounded the last corner. Still watching, still listening.

As I headed up the driveway, a little brown bird flew out of the carport and into the nearby arborvitae bushes. I knew there had to be others sheltered in that thicket, too. Everyone had a place to weather the storm, it seemed. And I was back at mine, having spent a lovely, leisurely hour strolling through the storm. 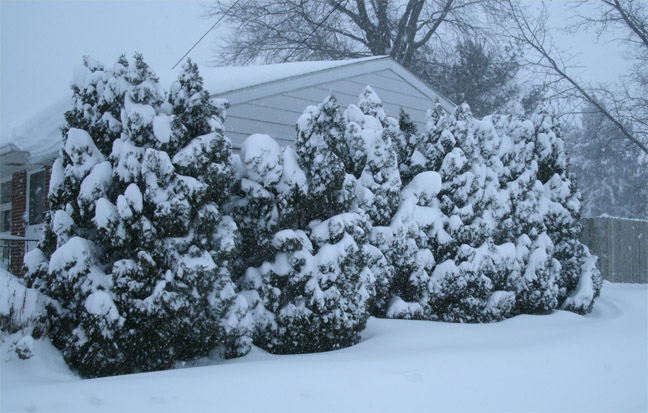 I hung up my snowy and noisy coat, kicked off my boots, and settled in with a steaming mug of green tea and the book I was close to finishing: William Least Heat-Moon’s collection of travel pieces, “Here, There, Elsewhere.” I soon came upon this paragraph and was startled by the connection:

Americans believe in the spiritually redeeming efficacy of travel almost as if it were prayer. We are prone to try to modify our lives simply by just GOING, whether on a walk around the block or on a coast-to-coast trek. And why not? We’re all descendants of travelers who reached these shores from the other hemisphere. Were stars not so splendidly cosmic a symbol, the blue union of our flag could well be composed of little footprints.

What an apt thought!

On this snowbound day, I had been guided first by one American author and validated later by another one. And I smiled knowing that I had left my own footprints on snow-covered streets during a wonderful northeastern blizzard. I deemed the inspection a success.