“I am alarmed when it happens that I have walked a mile into the woods bodily, without getting there in spirit. … But sometimes it happens that I cannot easily shake off the village. The thought of some work will run in my head and I am not where my body is. I am out of my senses. In my walks I would fain return to my senses. What business have I in the woods, if I am thinking of something out of the woods?” ~ Thoreau, “Walking”

I ate too much. I was staying at a friend’s place. We went out to dinner, we had a great conversation, and I ate too much. As she drove us back, I told her I would have to go for a walk to work off dinner; otherwise, my clothes wouldn’t fit me the next day. So she stopped the car at an athletic field a few blocks from her house. She recommended that I walk around it. I got out and headed down the path. She wished me well and turned toward home.

According to a sign I passed as I was walking, this series of fields totaled 44 acres. They were edged by large trees. Sugar maples, mostly; with some pines, locusts and silver maples added in. I trudged along their outskirts at first, feeling heavy. I was loaded down with food (which had been delicious, by the way). But I was also replaying parts of our conversation in my head. My friend and I had been tossing around ideas for a few future projects. Many possibilities surfaced at the dinner table. Saying them out loud triggered more, and I had written them down. As I now put one foot in front of the other, I began to create a mental to-do list to follow up on our plans. If Henry Thoreau had been beside me and had known what I was up to, he would have admonished me for being out of my senses. I wasn’t paying attention to the nature around me.

Halfway around, I picked up a pine cone. I tossed it back and forth from one hand to another, matching this action with the rhythm of my pace. The cone’s scales were prickly. Each one was capped by a sharp point. They didn’t exactly hurt my fingers, but I sure noticed they were there. Not knowing where the needles would land next was something that kept me aware of myself and kept me moving forward, as the sun kept dropping a bit lower in the western sky. 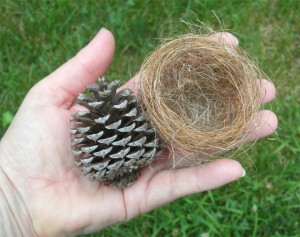 I began to hear a few birds in the trees. A cardinal was perched in one. Several chickadees called from another. A mourning dove echoed its slow mellow tones, from farther away. I was the only human circling the fields, but other creatures were here, too. I saw some of them flying, or landing in the fields, looking for dessert.

As I passed a typical New England stone wall, my gaze followed the straight line of its leveled-off top. I stopped at a lump. A brown and black-lined lump, with eyes. A chipmunk! I hadn’t seen one in a good, long while. It looked at me, and I talked to it. It tolerated this interchange for a few seconds, then it leapt into a crevice and peeked out at me, blinking. I talked to it again, and kept on walking. A gray squirrel was bounding along the other end of the wall, under an oak tree. He may have been hunting old acorns or something else. He blended in so well with the wall and the dusk, that I couldn’t tell what he was doing.

When I got to my starting point, I decided to keep on going. I was still stuffed. The weather was nice. The trees were nice. Why not make another round?

The pine cone still popped its needles into my hands. I saw little birds I couldn’t identify, scrutinizing the dirt. When I reached the stone wall, I saw another chipmunk in another spot. Or maybe it was the same one I’d seen before. This time, I could talk to it a bit longer before it darted between the stones. What a cutie! The gray squirrel was still at the other end of the wall, doing whatever he was doing. Since this part of the block was wooded and shady, I couldn’t see him well.

When I reached the starting point again, I knew I could handle a third time around. A few minutes into this decision, I spied something light brown on the ground. A nest! A small one, at that. I looked up at the tree it had fallen out of. I couldn’t tell where it had come from. It was tiny and perfect and fit completely on just my fingers. Who had built it? Where were they now? And where were the little ones that the nest had been built for? It was beautiful. It was soft and intricately woven. I picked it up and carried it along. It made a good companion to the prickly pine cone. My real question to myself was: Why had it taken me three times past this place to see it? 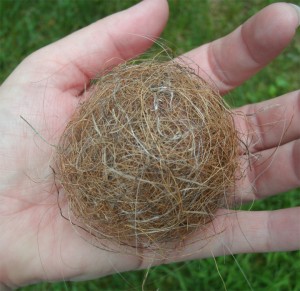 When I reached the stone wall for the third time, I saw the chipmunk – or another one – engrossed in eating something dark. I talked to it, and it was too involved to consider me a threat. It stayed put and continued gnawing. The gray squirrel was still concerned with squirrel business. I would never know what he was up to. I picked up two plastic bottles that someone had dropped or tossed out of a car. I had passed them twice. Now they would be recycled.

Soon enough I walked into the front door of my friend’s house. She and her husband were sitting in the living room. I told them that I had done three laps around the fields. “That’s three miles!” my friend said. Really? It hadn’t felt that long.

“And look what I found!” I said. I showed them the tiny nest. They admired it as much as I had. I put it and the pine cone next to my laptop for inspiration.

I had walked three miles. I felt better and lighter. I hadn’t solved any of the world’s major problems – or even any of my own. But I had picked up four things to bring back home. I had eventually paid more attention to nature than to my business concerns. So in the end, Mr. Thoreau may have approved of my saunter. The treasures I had found also reminded me of a quote by another great philosopher, the Native American named Black Elk: “The power of the world always works in circles, and everything tries to be round.”

2 responses to “Walking (Off Dinner)”