The Magic of Baby Birds

“We too are out, obeying the same law with all nature. Not less important are the observers of the birds than the birds themselves.” ~ Thoreau’s journal, March 20, 1858

When I picked up the phone, I heard nothing but panic in the voice in the receiver. The words came loud and fast and all in one breath: “There’s-a-baby-bird-in-my-driveway-and-the-mother-flew-away-and-I-don’t-know-what-to-do!!!”

I didn’t recognize the voice at first, and the only words I caught for sure were “baby bird.” I switched the phone to the other ear so I could hear the person better. “I’m sorry, what?”

She repeated herself, this time a little slower and clearer. “There’s a baby bird in my driveway, and the mother flew away, and I don’t know what to do!”

Ah. It was my friend Marie. A city girl who moved to the country.

“Okay,” I said. “I’m not sure you need to DO anything. What happened?”

She was still flustered. “When I came home just now and parked my car, I saw something moving in the dirt, sort of jumping around. Then I saw an even smaller thing with it, like a little ball of fur. I turned the motor off and sat there and watched. I realized these were two little gray and brown birds, and one was awfully tiny. I got out of the car, and the bigger one flew away. But the smaller one didn’t. I walked past it and onto the porch, and it still didn’t leave. I thought, this can’t be right. That’s when I called you.” 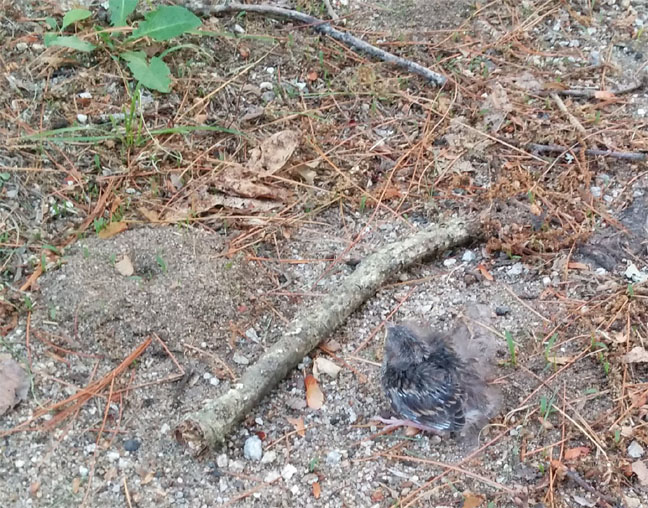 “This stuff happens,” I assured her. “A baby robin was in my yard in the same situation a few weeks ago. It was chirping outside my bathroom window, sitting on the ground, all by itself.”

“Nothing. I went outside later, and I saw a mother bird with the baby. She was leading it under a bush for protection. They were gone the next time I looked.”

“I don’t have any bushes in my yard,” Marie said. I knew she was right, because I’ve been to her house. She has some tall pine trees hovering over her roof. But there is no natural lower shelter where a ground-bound creature in potential danger could hide. And it was already dusk. Predators would come out soon. I tried to think of something she could take out to help. A cardboard box set on its side, maybe?

“Aw, the poor thing,” she said. “It’s still sitting out there. Clearly, it can’t fly.” Now she was watching the scene from her front window. “How did it get here in the first place?” she wondered.

“Maybe it was a first flight gone awry.”

What is it about baby birds – or really, about any small wild animals – that makes us think we’re responsible for their rescue? Sure, there may be times when we need to intervene. But in most cases, adult birds know better than we do how to resolve bird challenges. This was not the first time in history that a fledgling didn’t have a clue.

I started to ask Marie if she had a box when she interrupted me. “Oh, the bigger bird came back! Look at that, it’s hopping. And now the little one is hopping, too.” She laughed. “I’ve never seen this kind of thing before. The adult takes a few hops toward the street, and then it looks back to see if the baby is following. It’s chattering, too. It could be saying, ‘Look, this is the way we do it.’ Oh, this is funny! I’ve never seen this kind of thing before.” And she provided a hop-by-hop description as the pair moved slowly toward a neighbor’s yard that was full of both manmade and natural lawn decorations.

“Uh-oh, the baby stopped in the middle of the road. It’s pooped. It’s not going anywhere now. What if a car comes?” On my end, I thought this was an unlikely event. Marie lives in a very quiet neighborhood, and only close residents drive on her road. And anyway, Mom or Dad Bird persisted and insisted. After a quick breather, the two continued to make steady progress.

“Almost there, they’re almost across. Oh, wow! Other birds are flying in now. One, two, three, maybe four or five. They’re chattering too. It’s as if they were waiting to see what would happen, and now they’re cheering the baby on. ‘It’s okay now,’ they’re saying. ‘You’re back together with us.’” I couldn’t help but smile at this welcome outcome.

“ … to raise a baby bird!” Marie finished. We both laughed. Potential tragedy seemed to have been averted.

“What will happen now?” she asked.

“Hopefully, they’ll teach it to fly.” We could only cross our fingers. Marie turned away and didn’t see whether the small flock left by land or by air. By the time she thought to look again, she saw no little brown birds.

Our watching done, we said our goodbyes and hung up the phones.

Mark this as a day when one little bird and two grown-up humans
learned something new.

5 Responses to The Magic of Baby Birds