The Resilience of Pines

“I noticed a week or two ago that one of my white pines, some six feet high with a thick top, was bent under a great burden of very moist snow, almost to the point of breaking, so that an ounce more of weight would surely have broken it. As I was confined to the house by sickness, and the tree had already been four or five days in that position, I despaired of its ever recovering itself; but, greatly to my surprise, when, a few days after, the snow had melted off, I saw the tree almost perfectly upright again. It is evident that trees will bear to be bent by this cause and at this season much more than by the hand of man. Probably the less harm is done in the first place by the weight being so gradually applied, and perhaps the tree is better able to bear it at this season of the year.” ~ Thoreau’s journal, January 3, 1861

I thought of Thoreau’s description of pine resilience when nine inches of wet snow fell on our region last week. All of our trees were quickly and thickly outlined in white. But in instances like this one, our backyard white pine is always the tree most affected. Normally its lowest branch reaches straight outward or lifts itself slightly skyward, from four feet up. After the storm, its farthest-most needles touched the ground. 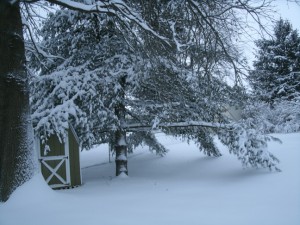 With the forecast of warmer temperatures, I knew the snowy covering wouldn’t last long. I didn’t despair of the white pine’s fate, as Thoreau did. Sure enough, within 48 hours, the surface snow had melted and slid off every branch. The tree was back to normal, at least in outward appearance. 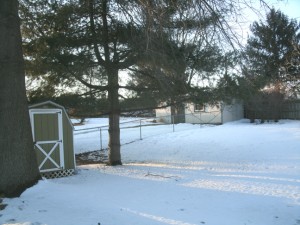 Seeing this simple process: Is it any wonder that Henry Thoreau used examples from nature as metaphors for human behavior? In challenging times, can’t we exhibit as much resilience as a pine tree once covered in snow?

Now, of course, I’ve seen myriad trees damaged by powerful hurricanes and ice storms. I’m sure many in New England were hurt badly with the weight of the snows of this season. And yes, under extreme circumstances, both trees and people will break.

But isn’t it more likely that both will bend and bounce back? I think so. I think we can learn something of ourselves from the pines. Some folks are fond of saying, “What doesn’t kill us, makes us stronger.” The flexibility of the pines illustrates this principle. Just let that snow slide away in its time, and then spring back.

Or forward. Ah, this leads us to another metaphor … and just in time!

3 Responses to The Resilience of Pines