“I do not propose to write an ode to dejection, but to brag as lustily as chanticleer in the morning, standing on his roost, if only to wake my neighbors up.”    –Thoreau, Walden

On a trip to Cuba a decade ago to research sustainable agriculture, I arrived too late at the guest hostel in the southern, rural part of the island to see much of the palm-treed hills surrounding us in our small valley. Early the next morning, however, I got my chance when I was awoken by not one, not two, but what sounded like hundreds of roosters crowing all around me. I dressed quickly and went outside to find that roosters roamed freely in this village, strutting as lustily as Thoreau’s chanticleer. Roosters are undoubtedly more intent on alerting other roosters to their territory than on signaling transformation, but in El Valle del Gallo, as I called this place, I experienced the power of roosters crowing in unintentional symphony at the dawn of another day.

Recently I heard a story on National Public Radio about two women who own a small boutique in a Tehran mall. The women’s best-selling items might not seem radical: shirts, mugs, and pillows with roosters on them. Yet their roosters feature feathers drawn from the words of a Persian poem celebrating a new dawn. Like an earlier t-shirt the women offered with the word onid, or hope, the rooster items draw mixed reactions. According to the report, some customers don’t believe there’s hope for their country right now, while others want to believe in a new future for Iran.

These women were hopeful because they remembered a more open time in their country; the items they sold offered the possibility of a brighter day. These women’s belief in renewal touched me because I, too, retain an optimism that often seems naïve in the face of the world’s problems, a hopefulness based on the idea of a better future that was once voiced by young people of the 60s and 70s. “All we need is love,” sang the Beatles, “Love is all we need.”

In the early 1970s, Stonebridge Farm on Colorado’s Front Range was home to a small commune of hippies. Living in a tipi, bus, barn, and old farmhouse, they raised cows and chickens and sold milk and eggs to the small town nearby. Their back-to-the-land experiment was short-lived, but their work contributed to the farm’s organic stewardship. Twenty years later, my partner and I started a community-supported farm on the same land. For the last 24 years, we’ve been building the kind of future we’d like to see, one based on a reciprocal relationship with the land and community-based support for organic food production.

We raise chickens at Stonebridge, but since we don’t breed our own chicks, we don’t need rooster services. Last spring, we bought six chicks that were supposed to be egg-laying hens. But almost from the beginning, I suspected that one of the blue-green egg-layers would grow up to be a rooster. Its legs were longer and feathers more pronounced than the others; it looked regal, as if it were wearing a pair of 18th-century pantaloons and a tapestry jacket, just the type of braggart Thoreau had imagined. “ER-er-er-ERRR,” it crowed one day as I passed by the coop, making its intentions—and gender—clear. Luckily, chicken-loving friends were willing to adopt Ajax to replenish their breeding stock. 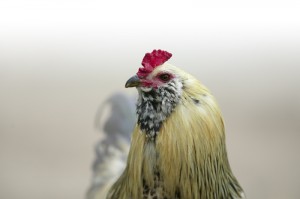 I love my hens, but since hearing the story about the Iranian shopkeepers and their rooster t-shirts, I’ve gained a new appreciation for the louder fowl of the species. Metaphorically, as Thoreau knew and wrote, we need roosters to arouse the sleeping into action, voice inconvenient truths, and lead the call for change.

Today, social networking provides roosters more perches from which to crow than in Thoreau’s time. That may not make it easier to be a rooster – the risks of raising an unwelcome alarm will always exist – but more roosts means more roosters crowing together about the big things we’re facing like climate crisis, violence in communities and nations, and an ever-deepening gap between the have-mores and the have-lesses.

We roosters may be individualists, but with so many crowing at once, a collective message forms and surely it rises above the cacophonous din. Like the roosters of El Valle del Gallo, we raise our voices together with hope for change. By pairing personal acts with collaborative action, we establish that “hope” can be more than a slogan on a t-shirt. If we care about the day, the future and the world we’ll leave behind, we need to be like roosters and wake each other up.

Kayann Short, Ph.D., is the author of A Bushel’s Worth: An Ecobiography (Torrey House Press). She farms, writes, and teaches at Stonebridge Farm, the first CSA in Boulder County, Colorado.