Deeper Still – Digging Back into The Great Snow of 1717

I’ve just come in from hoisting more snow off the driveway and onto the banks along it. I use the word “hoisting,” because the usual dig-and-fling of shoveling won’t work anymore. Instead I’m now tossing snow back at the sky, which seems to underline the futility of the work. 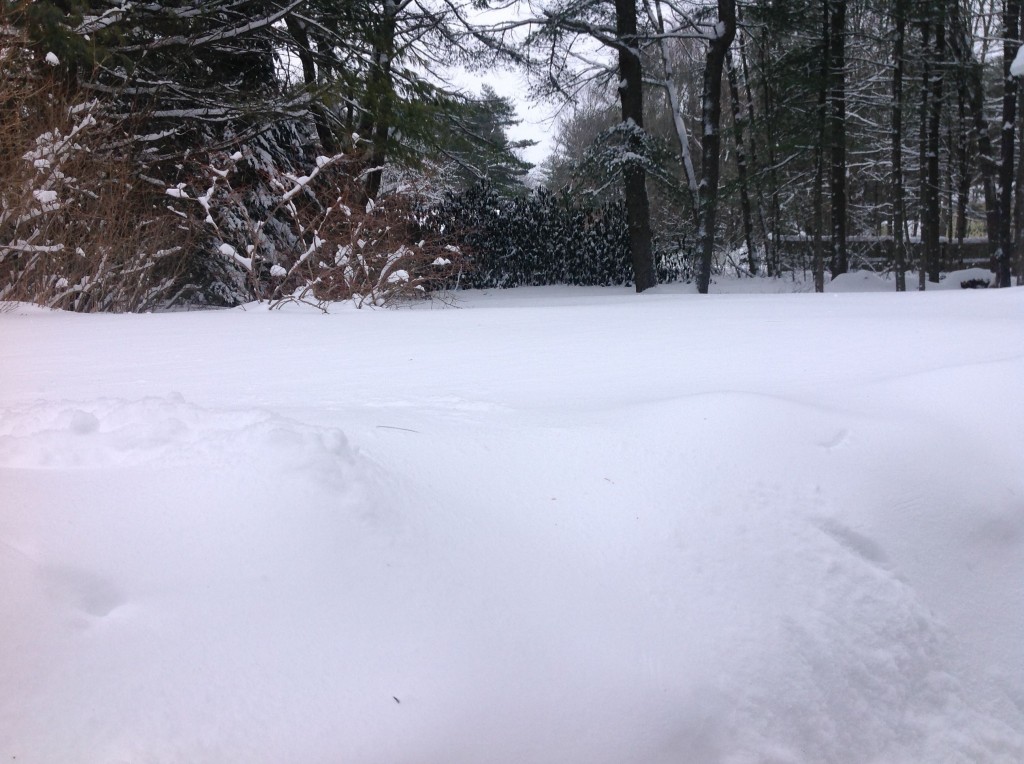 Whenever Henry Thoreau wants to evoke wallowing snows and winter awe, he turns back to the Great Snow[s] of 1717. Then, in the very month of February, huge, wind-driven snows laid down Buffalonian depths that buried both houses and pastured animals. In “Winter Visitors,” he writes of “that early settler’s family in the town of Sutton, in this state”:

…whose cottage was completely covered by the great snow of 1717 when he was absent, and an Indian found it only by the hole which the chimney’s breath made in the drift, and so relieved the family.

And a little earlier, at the end of “Housewarming,” he returns from being “exposed to the rudest blasts” to this thought:

It would be easy to cut their [humanity’s] threads anytime with a little sharper blast from the north. We go on dating from Cold Fridays and Great Snows, but a little colder Friday, or greater snow, would put a period to man’s existence on the globe.

Both moments in Walden point to the narrow span that we call “normal” and what waits outside it; they make his point amply. But for drifts of detail equal to the snows they describe, we go to his journal, where Thoreau, in turn, records an eyewitness account from Cotton Mather in a December letter from 1717. The letter begins with understatement:

On the twentieth of last February there came on a snow, which being added unto what had covered the ground a few days before, made a thicker mantle for our mother than what was usual.

Okay, we think, big storm atop prior snowfall; we’ve seen the like. But like our current winter with its more than 5 feet of snow for Boston in the past 17 days (ah, the recurring 17), there was more to come:

On the 24th day of the month comes Pelion upon Ossa [see mountainous imagery]: Another snow came on which almost buried the memory of the former, with a storm so famous that Heaven laid an interdict on the religious assemblies throughout the country…The Indians near an hundred years old affirm that their fathers never told them of anything that equalled it.

There follows vivid description of all sorts of snow-burials – cattle entombed, sheep too:

For no less than eight and twenty days after the storm, the people pulling out the ruins of above an hundred sheep out of a snow bank, which lay sixteen foot high, drifted over them, there was two found alive…A man had a couple of young hogs, which he gave over for dead, but on the 27th day after their burial, they made their way out of a snow bank, at the bottom of which they had found a little tansy to feed upon.

So, given this ’17 comparison, not so deep for us…yet. When last I checked, we still have “a little tansy to feed upon.” Still, there’s more winter to come.

Added note for those looking for winter words: Mather uses the word “innived” for those animals buried in snow. Just the word for our winter, I think – may your days be enlivened for being innived.