The appointed time approaches. I am, I think, set. My notes are aligned before me; books I might need are at hand; I’ve changed from sweatshirt to collared one; my computer-camera is aimed my way, its mic amped up. And the sign we bought as this house’s first purchase will appear in the upper-left quadrant of the screen. SIMPLIFY, it says. Say it twice to make it quotation. A sign…and a command. Something to live up to. Nice touch, I think. 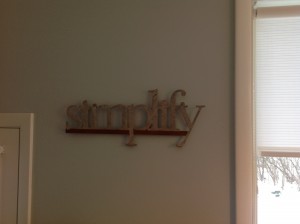 An odd underwater sound, like air escaping from a submerged shoe, signals the start; I click the phone icon, and there in dark forms they are – my class. I think that phrase to myself, adding a question mark. I know one person in the room. The rest are there, I suppose, for the myriad reasons that bring us all to our commitments, largely to commitments made for us.

Some 3500 miles away, it is 4:30 in the afternoon, and outside the sun is leaving the city streets. Wine and cigarettes must issue a siren’s call. Here, I’m pressing into late morning, and our short sun is working on what little December warmth it can conjure. Coffee is still ascendant.

As ever, I think, noting that my eyes look squinty, my face puffy on the small embedded screen on my desktop. We are not made to be photographed by a camera looking up as gravity pulls us down.

But, having settled the lights in their Paris classroom and greeted each other, we say it’s time to begin. Here, I say silently, comes Henry, and I begin limning some of Henry Thoreau’s subtractive practices I’ve thought through during the past few days. “To affect the quality of the day, that is the highest art,” he wrote in Where I lived and What I Lived For. And a page later, he pounded twice on the nailhead of advice: “Simplify, simplify.” And then, a little later, for those resistant (or asleep) among us, he offered the repeating rumble-stroke of “Simplicity, simplicity, simplicity.”

“That ought to suffice,” he might have said, laying down his hammer/pen and imagining us, his readers. “They should get that, at least.”

And, of course, they do get this pruning of life to its “necessaries” to make room for the work chosen, for the I-work of becoming and making.

As I talk and lay out a sketch of Henry Thoreau’s move to and “experiment” at Walden Pond, I begin to sink into the familiar rhythm of story and teaching. I read some more of Henry’s words, offering paraphrases on the side as I travel a good deal from line to line; I pause and scan the room before me. Teaching makes me alive to how Thoreau’s words may sound for others, what they may mean. But every so often, motion draws my eye outside the borders of the screen – birds arc toward the backyard feeder; a woodpecker hammers at a pine; the squirrel is back eyeing the feeder; I suppress the urge to chase. Good dog.

Strangeness settles over me. I was going to write, “an estranged feeling settles over me,” but that isn’t so. The familiar book, the voicing of tentative understanding, of question, the partly-visible audience in dark relief on the screen.

I ask a question and watch the familiar scene of students turning to each other to see who will speak – I’m at home in two places. 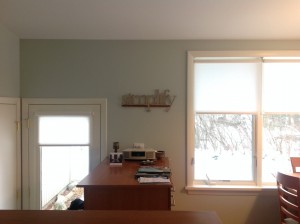