Once More to the Old Tree

In November 1860, Henry David Thoreau walked around the neighboring town of Boxboro to inspect an old-growth woodlot owned by Henderson Inches. He was fascinated by the oldest oak trees he had ever seen. He made two separate trips in eight days and did a lot of trunk measuring. “I can realize how this country appeared when it was discovered,” he wrote on November 10th. “Such were the oak woods which the Indian threaded hereabouts.”

The oldest tree I ever met was a craggy and shaggy sycamore that lived a few miles from my childhood home. Our Girl Scout troop visited it once, probably in the late 1960s. We were told then that it was either the oldest or the largest tree in the state. Or was it the country? I forget. I remember that its arms stretched over the front yard of a farmhouse that was otherwise surrounded by cornfields. One huge branch almost touched the ground. We could have climbed up and sat on it, but we were warned against doing so. Someone was worried that the branch would break off under our weight. Being an avid tree climber myself, I was disappointed. The tree was great to look at. But I longed to clamber over that one branch and to sit among its massive leaves for a while. I would have been careful. I wouldn’t have broken it.

Fast forward, forty years. Now most of the cornfields are gone from this area. They’ve been replaced by a four-lane highway, strips of businesses and eateries, and a road leading to the Old Sycamore Industrial Park. It’s ridiculous. I feel a sense of indignation whenever I pass by the intersection.

I voiced this opinion to a childhood friend recently, as he and I were riding along the main road. “It’s too bad that the only legacies left of the tree are its name and its picture on that stupid sign,” I said. 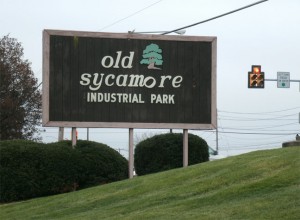 “What are you talking about? The tree’s still there,” he said.

“No, really? I assumed it had fallen down or had been plowed under.”

We made a quick turn onto Old Tree Drive, passed a few faceless facades of warehouses, and then turned left into a small parking lot. Sure enough, there they both still stood: the farmhouse and the sycamore tree. I was amazed. The developers had chosen to leave them alone.

And yet: time and circumstances had aged the tree a great deal. Fresh leaves showed that the tree was still alive, but much of its main trunk had deteriorated and was missing. It seems never to have grown straight up toward the sky. Instead, it grew out and across the yard. The low main branch I remembered was now supported by a short post, and part of it had long settled on the ground. The higher main branch also rested on a large support timber. This sycamore was an even older man now, receding and wasting away, needing crutches. But it was still hanging on; still taking in carbon dioxide and giving us fresh oxygen in return. Thank you, Tree. 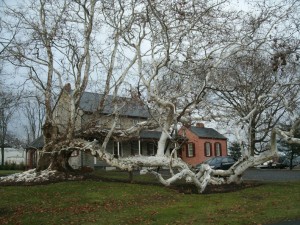 In the days that followed, I grew curious about this sycamore. Was it the oldest or the largest, within any political boundaries? I did some brief research. A contributor to a 1944 state tree book called “Penn’s Woods, 1682-1932,” said that this one was ‘Pennsylvania’s Most Massive Tree.” Local newspapers occasionally ran stories about the tree, but the articles didn’t include any accolades. I clicked on some web sites that documented the oldest or biggest trees in the country and in the world. But no one had yet registered “our” sycamore on these species lists. And I didn’t have any numbers to make accurate comparisons. So I did what Henry David Thoreau would have done. I went back to the site outfitted with a tape measure, a camera, a notebook, and an assistant. 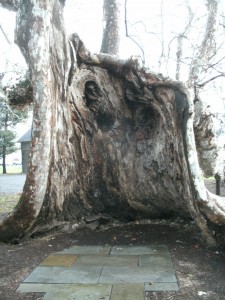 We measured the girth – or, what remains of it – at 25 feet around. The low branch is about 70 feet long and is generally about 7 ½ feet in circumference. We can estimate that its age is somewhere in the 300-350 year range, taking it back to a time when this place really WAS part of Penn’s Woods and was merely a colony. I registered the tree on an international Monumental Trees web site. According to the lists assembled there, this one may not be the oldest or the biggest sycamore tree in Pennsylvania. One in Lansdowne may beat it out by 100 years.

Our sycamore may not be an award winner or a “witness tree,” but it has witnessed quite a lot. We can be proud of its history and its stamina, and we can admire it for as long as it is able to live with us. And yes, I still desperately want to climb over that low branch. I haven’t … yet.

(Thanks to Paul Martin, Jr., for his help in this rediscovery.)

3 responses to “Once More to the Old Tree”