Though far from Henry’s or our own woods, we keep seeing or hearing things or moments that nonetheless summon him to mind. The most recent is a reported sighting on the outskirts of Paris. First tabbed as a tiger on the loose (from where seemed uncertain), the Paris cat has now been downgraded to unknown feline, even as any number of gendarmes continue to search for him/her.

Still, a grainy photo and clear set of prints suggest something beyond an overweight tabby – estimates of the cat’s size, based on its tracks, range between 100 and 150 pounds. Enough cat to get your attention, bien sûr. 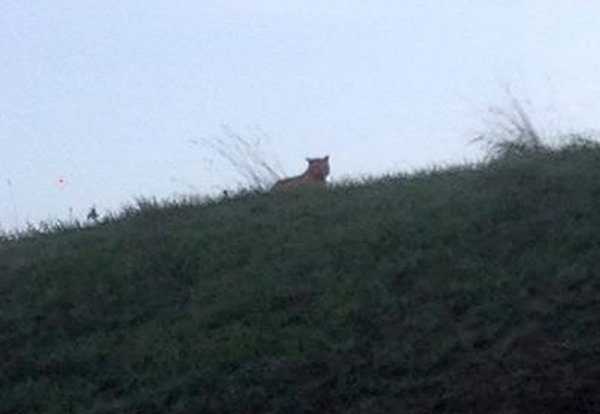 This photo provided by the town council of Montévrain on Thursday shows what was initially described as a tiger. Credit via Associated Press

Thoreau, of course, lived in a landscape shorn of its large carnivores, but, as his writing make clear, he was an avid tracker of wildlife. And his readings of these signs fired his imagination; they helped him see and write about a narrative world.

An American, who when home follows closely the reported tracks and resurgence of our native lions, I naturally have been keeping track of the Paris cat. My native New England is rife with lion-rumor these days, and I figure to see one there during my lifetime. The suburbs of Paris are older ground, however, and so this visit from the wild has had people and news outlets agog – schools with armed guards, people told to stay indoors, car doors locked, various experts quoted.

And the course of response has taken a predictable route too. Something akin to panic has morphed into brow-raised cynicism even as the cat has been assigned more usual proportions.

But the avid attention speaks also of a hunger Henry Thoreau knew too – the wild is a tonic and a hope – an I’m guessing that any number of us following the story hope the Paris cat will vanish into the countryside, where we will imagine he lives on, even as we await his next visit.