I eased through a birthday last week. I say it this way because I didn’t celebrate the occasion. This year didn’t carry a momentous number ending in 0 or 5. And once you hit the half-century mark, you have no need for fanfare. No reason to get dressed up and have a party with school friends, with a big birthday cake and candles and a rousing game of Pin the Tail on the Donkey, like we did way back when I turned seven. It’s now just a day like any other. I was determined not to play it up.

Then again, I allowed Facebook to out me. The quick online greetings started early. I ignored them as best as I could and logged off to go to my job at a used bookstore. One of my co-workers came in later with a strange expression on her face.

“Did Facebook lie to me this morning, or is today your birthday?” she asked.

I nodded. “Today is my birthday,” I admitted.

“Then I have a small birthday present for you,” she said. She handed me a candy bar. It was the exact brand and size that she has seen me nibble on every workday for a year and a half. It was the perfect present. I thanked her for this considerable generosity.

Truth be told, I had already gotten quiet birthday wishes at work the previous day. They came as I was cataloging a book. I opened the front cover and a card fell out. I’m used to this happening. People leave all sorts of items behind in donated or abandoned books: bookmarks, receipts, subway tickets, postcards and such. This greeting card had on its cover a painting of a bluebird in front of a forsythia bush. The scene was bright and almost too colorful and Spring-like for this all-brown November day. “Especially for You On Your Birthday,” it read. Coming into my hands within 24 hours of my own anniversary, this card seemed to be meant for me. Inside was written the name of the previous owner (who is now deceased, I know) as well as the signature of the friend who had sent him this card. I couldn’t return it to its original receiver. I didn’t know who the sender was. I felt only slight remorse at commandeering the card. I slipped it into my bottom drawer so that I could take it home.

At the end of the day, when I walked into my kitchen, I put the card on the table next to my two others. I had gotten these through the mail from long-distance friends. One was funny, and the other one was nice and heartfelt. Both reflected well the people who had sent them. They made me smile. 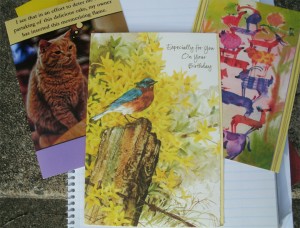 I looked at this third card and wondered if I should have just dropped it into a recycling bin. It was pretty enough. But it was too flowery for my style and too much like an old-person’s card. I am not an old person. I wouldn’t have given this card to anyone. And I would have shrugged it off as a mistake if one of my actual friends had seen fit to send me one like this.

To keep, or not to keep? I opened the card again. This time I saw a small paragraph on the bottom left that I had missed seeing earlier. It defined the picture on the cover. “Eastern Bluebird. The bluebird ‘carries the sky on its back,’ wrote Henry David Thoreau.” Now I laughed out loud. I didn’t have to read the rest of the description. I knew that this card had come directly to me from Henry. What other explanation could there be? It’s a keeper. Thanks, Henry.