On Taking Down a White Pine

Posted on August 9, 2014 by Sandy Stott | Comments Off on On Taking Down a White Pine

Famously, Henry Thoreau built his house in the woods from “some tall, arrowy white pines” that he cut down “still in their youth.” And, less famously, a page or so later in Walden, he contends, “Before I had done I was more friend than foe of the pine tree…having become better acquainted with it.” Perhaps. I’ve had Thoreau’s experience and passage in mind recently as I’ve felt my own imperative to cut down a pine. Here’s that story.

It’s a mid-afternoon in early August when the white truck with WellTree, the company logo, on it rolls up. It’s a bucket truck, and it’s followed by a bulky-bodied cousin dragging an industrial-sized chipper (think Fargo). Two thirty-something men with orange headphones around their necks step down from the trucks in our driveway and begin to size up a large white pine on the front lawn; I walk out to meet them and redirect them to the pine with four leaders on the fringe of the driveway. A few second pass. “Geeze, Jeff,” one says under his breath. “This time of day?” 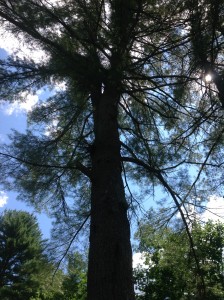 Pine Presence – this one with 2 leaders stayed.

Jeff is WellTree’s owner, and a few hours ago, he appeared and wondered if his guys could begin on this tree a day early (One of their two bucket-trucks was in for repair, and they had two bucket jobs for tomorrow). “Sure,” I’d said.

And so his guys have arrived, but the 80-foot tree before and above them is not a mid-afternoon tree. “We were expecting something smaller,” the man, who will turn out to be the sawyer, says. Fifteen minutes later, the bucket truck is nosed up to the pine’s trunk and, headphones tight to his ears, he’s lifting off as the mechanical arm unflexes; he seems to fly up into the tree like an actor carried over stage by invisible wires. Thirty feet up, he fires up his saw and trims a spreading branch at the halfway point; then, he shifts the bucket five feet to his left, leans out with one arm and cuts the rest of the limb; it drops to the driveway with a body sound you feel through your feet. The usual day with its usual decisions goes away.

Feeling agitated and vague, I go inside to work; I can’t sit still. The saw snarls. Then the chipper’s motor adds its chewing bass note. I’m up pacing. I feel like the tree, I think; “well, that’s silly,” I say out loud. I sit again, read a sentence, then reread it, wonder what it’s about, can’t recall. “I feel like the tree,” I say aloud. The saw snarls again. The tree’s day has arrived. I have summoned it.

Taking down this white pine has not been a whimsical decision. We’ve been in our house for 11 years, and early on, noting the pine’s lean toward and over that house, we had some branches trimmed as guard against our regular ice storms. That seemed to suffice. And yes, it dripped pitch steadily on whatever was beneath it, but like all trees, as I swept its needles up every so often, it grew neighborly. Or I grew neighborly. But earlier this summer Ray, the man who helps us with our plants, called our attention to a seam in the trunk’s center; that wet, dark line appeared on both sides, and when you stood next to the trunk, the whole tree leaned over you in the direction of the house. “If this were my house,” said Ray, “I’d have that looked after.” And so, in this era when storms seem to have intensified and a new fungus has nipped at local pines’ needles, we called WellTree to have a look.

To begin with, this pine has four leaders, which any follower will tell you is three too many. I learn that pines growing without the tight neighborliness of other pines tend in this direction; they spread into available sky. But as they reach size all this spreading weight begins to pull the central trunk apart; the seam Ray pointed out is likely sign of the leaders’ branching out.

I look up through our clerestory windows. There’s more light in the sky; I go outside to watch. More limbs fall. The two machines snarl and growl, the smaller feeds the larger. Wood chips fly into the truck’s covered body; each chip is smaller than a thumbnail. I realize that I am sad. And once I’ve said “sad” to myself, as a I lean against our car’s body watching, the feeling takes hold deeply. The bucket moves like a conjurer’s arm. More pieces fall; tons remain upright. This, I realize, is going to take some time.

It’s nighttime. The men and their trucks have left. Two leaders of the pine remain at their full 80 feet. It’s raining lightly. I feel tears seep from my eyes. The sadness feels unalloyed, pure. What have I done? I ask. I want to look away; I can’t.

There is explanation; there is sense to be made: I’ve just retired from a 40-year teaching career and its everyday touch of youth and its fast-growing leaders. We’ve moved 130 miles from the school where we lived. Every day I press a littler farther into a shorter future. But really? That’s maudlin, and there’s as much to celebrate as there is to mourn, more really.

And there isn’t explanation. I’ve run the saw, felled trees, sometimes 10s of them in a day; I’ve burned wood for heat. I’ve lived in End-of-the-road New Hampshire in a wood-heated, or at least warmed, house.

Perhaps, I think, the time it’s taking offers some echo of just how long this pine has been aloft, stretching a little each day for the light in the sky, thickening to itself in rings over years. Perhaps it’s because I’ve ordered this, like some near general, and now I must sit in my bunker and watch my orders played out. Perhaps.

On the second morning, it takes longer. The two remaining leaders must be trimmed carefully – they rise over the neighborhood’s wires. And then, bringing their bodies down must happen in alternating ten-foot sections, with the rope tied off to the other leader-trunk. Flakes of sawdust float like a storm-ending flurry of snow.

Whittled now down to 40-foot stalk of pine. With our neighbor, Claude, I’m out watching this final trunk pulled down onto a cross-hatching of its brother stems laid out to protect the lawn some from the final fall. Post-image: after it comes down, and after the trunk is cut into eight-foot lengths, the sawyer is running the hydraulic arm that clasps and lifts each log into the truck’s body; when he raises the section with the seam in it, the log spins, and I can see that the seam goes all the way through the trunk; also, as the log rises a trail of liquid drips steadily from it – too fluid and frequent to be pitch, it must be some watery intermediate: yes, it drips like blood, but it also is some harbinger of rot.

The work order calls for this “low stump” to be left. We’ve said we’ll live with this before deciding what’s next. Now, in the aftermath, I’ve taken a seat there. First I’ve counted the rings, noting the flush years and the lean, saying the numbers aloud to keep from losing my place, then recounting to this: 63. Mild surprise – older, I thought, say in its 80s. The column of air above me where the pine was weighs little, best measured in ounces; the bushes and nearby trees eye the new open space. 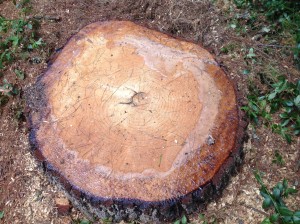 Early evening of pine-absence: sunlight punctuated by distant thunder; the light gives way to a faux-dusk. A storm is lumbering in from the north. It breaks: flashed light, immediate thunder, rain that obscures everything beyond the yard – is there room for air amid such water? The backyard pines toss their branches in the furious air; the maples buck up high. I feel washed free.