Heat, Humidity & Henry (Or: In Touch with the Past, Part II)

Yesterday we had one of those hot and humid days. Ick. You know the kind. Not only was it darn uncomfortable just to sit around and breathe, but it also caused every hair on my head to curl in a different direction. Neither cap-wearing nor combing could remedy the situation. And the hot and humid day turned into a hot and sticky night. The occasional whiffs of air from an open window didn’t do much to cool off the bedroom. I couldn’t get to sleep.

After two hours of just lying there, I decided to get up and to get some work done instead. I might as well be productive, as long as I was awake. I fired up the computer and got out some of my Thoreau books. I wanted to scan his journal for references to a plant I had found in our yard. I hoped Thoreau had seen and felt the same way about it that I did. I had hoped to write a post here in response to whatever he had written.

I opened the first of my two-volume Dover set: a reprint of the 1906 journal volumes that Sandy Stott mentioned in his recent post, “In Touch with the Past” (https://thoreaufarm.org/2014/06/in-touch-with-the-past/). These books are slightly more portable, take up less room, and contain the same text as the ones Sandy uses. But all I found were Henry’s glimpses of the plant, and some of the dates when he saw that it had blossomed. I wanted more details, more substance. This time, he wasn’t forthcoming. I sighed. This particular subject wasn’t going to work. What was I going to write about instead?

Then I stumbled upon this entry:

“June 21. … The warmest day yet. For the last two days I have worn nothing around my neck. This change or putting off of clothing is, methinks, as good an evidence of the increasing warmth of the weather as meteorological instruments. I thought it was hot weather, perchance, when, a month ago, I slept with a window wide open and laid aside [it] a[s] comfortable, but by and by I found that I had got two windows open, and to-night two windows and the door are far from enough.” ~ June 21, 1853 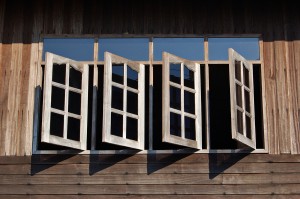 No Matter How Many Windows Open…

I shook my head. Here we were, sharing the same discomfort, across the span of 161 years. No matter how many bedroom windows we’ve opened, they’ve done nothing to bring us relief. The times, they are not a-changing. This painted a picture of Henry Thoreau that I had not thought of before. The naturalist, the writer, the surveyor, the saunterer, the philosopher? Sure. Someone who lies awake on a steamy summer night and considers the relationship between the rising temperatures and how much clothing a person is wearing? No. But it’s certainly an interesting image. Then again, what else could he do under the circumstances? He didn’t have a computer for entertainment, where he could check his e-mail and what his Facebook friends were doing at midnight.

Alas, Henry. I suspect we will have more of these unbearable and sleepless nights in the next three months. I’ll think of you again whenever the act of opening two windows and a door isn’t enough to cool the bedroom.