Solstice – In The Long Light of the Journals

The light woke me before five this morning. Often, these days, it’s the birds, whose singing begins with a single fluted call just after four; that call garners response. Then, the avian neighborhood joins in. But today, appropriately, it was the light, which seemed intent on my living the fullness of this “longest” day of the year. I got up, brewed some coffee and went to a morning chair to read.

Through these days in 1855, Henry Thoreau was also making the most of the long light, spending hours out and about, and, for the most part, recording only the nests he observed in short journal entries. These days form a skein of regeneration: as the light peaks the whole world seems to be rising and chirping from its many cupped circles. Young birds break from their eggs, squall for food, fledge finally, and Henry, as he walked, must always have been looking up. A whole sky alight suggested as much.

But one day, the 18th, on his way to or from The Hemlocks, Henry catches motion on the ground. First one, then another, painted tortoise appears: “I saw a painted tortoise just beginning its hole; then another a dozen rods from the river on the bare barren field near some pitch pines…I stooped down over it, and, to my surprise, after a slight pause it proceeded in its work, directly under and within eighteen inches of my face.” For long minutes Henry stays still in this “constrained position,” watching, as the turtle digs her hole and lays five “wet, flesh-colored” eggs. His description is typically precise, satisfying, and now, this reader thinks, it’s time to rise from this cramping crouch and move on. Perhaps to the next local miracle. 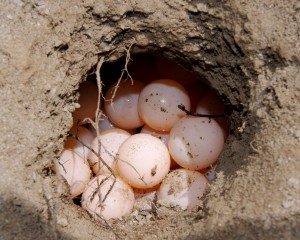 From Henry’s Point of View

Henry, however, stays; I stay too. And I am rewarded with a recovered favorite image, a dance of completion that seems just right for the days of maximum light:

After these ten minutes or more, it without pause or turning began to scrape the moist earth into the whole with its hind legs, and, when it had half filled it, it carefully pressed it down with the edges of its hind feet, dancing on them alternately, for some time, as on its knees, tilting from side to side, pressing by the whole weight of the rear of its shell…The thoroughness with which the covering was done was remarkable. It persevered in drawing in and dancing on the dry surface which had never been disturbed long after you thought it had done its duty, but it never moved its forefeet, nor once looked round, nor saw the eggs it had laid. 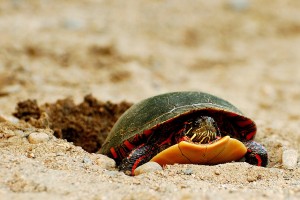 I put the journal down. I have seen such dancing, for me snapping turtles crawled up from a nearby bog. Now the image is fresh again, a dance of the solstice lit by the long day of Henry Thoreau’s writing.

Comments Off on Solstice Dance