Time of the Lilacs

Lilac bushes aren’t technically “wild,” because they have to be planted by humans. In spite of this distinction, Henry Thoreau did not ignore the ones growing in his own neighborhood. According to the records found in his journal entries, he saw Concord’s fragrant purple and white flowers blooming most often from about May 17 to May 22. This was the week when the air of the northeastern spring became heavy with their signature and heady perfume. 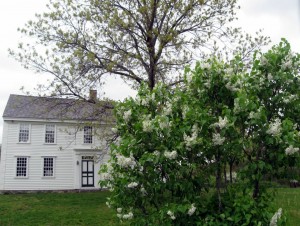 Thoreau continued to observe lilacs throughout the year and away from the center of town. He mentioned them in the “Former Inhabitants; and Winter Visitors” chapter of Walden. In the fields and forests that surrounded the pond, he came upon abandoned plots that were once occupied by former slaves and emancipated black freemen. The “former inhabitants” had died or had moved away many years earlier. Their houses had already been removed or reclaimed by the earth. But it wasn’t difficult to find the spots where they had once stood. All you had to do was look for lilacs.

Still grows the vivacious lilac a generation after the door and lintel and
the sill are gone, unfolding its sweet-scented flowers each spring, to be
plucked by the musing traveller [sic]; planted and tended once by children’s
hands, in front-yard plots, – now standing by wall-sides in retired pastures,
and giving place to new-rising forests; — the last of that stirp [ancestral line],
sole survivor of that family. Little did the dusky children think that the
puny slip with its two eyes only, which they stuck in the ground in the
shadow of the house and daily watered, would root itself so, and outlive
them, and the house itself in the rear that shaded it, and grown man’s
garden and orchard, and tell their story faintly to the lone wanderer a
half-century after they had grown up and died, — blossoming as fair, and
smelling as sweet, as in that first spring. I mark its still tender, civil,
cheerful, lilac colors.

The people were gone, but the purple and white flowering bushes remained behind.

In later years, when Thoreau became interested in seed dispersion and the reproductive and growing properties of each plant species, he turned again to the lilacs. On October 25, 1860, he walked to one of those sites and lobbed off a branch. Determining the age of a lilac can be difficult, since it grows from multiple trunks. Yet Thoreau recorded his findings:

Cut one of the largest of the lilacs at the Nutting wall, eighteen inches
from the ground. It there measures one and five sixteenths inches and
has twenty distinct rings from centre, then about twelve very fine, not
thicker than previous three; equals thirty-two in all. It evidently dies
down many times, and yet lives and sends up fresh shoots from the root.

He had casually predicted in Walden that these bushes were at least a generation old. He now had scientific proof of the fact, as he counted thirty-two rings in the cutting.

In the summer of 1861, Thoreau traveled with Horace Mann Jr. to the American Midwest. On their return route, the men spent a few days on Mackinac Island: the unique outcropping sitting just north of the mitten of Michigan, and located between Lake Michigan and Lake Huron. There, the two men “botanized” and chatted with the local residents. In the middle of Thoreau’s plant inventory for Mackinac, he wrote “Apple in bloom & lilac.” He circled the words for emphasis. He probably found this sighting interesting because of the date. June was turning into July. Here on Mackinac, apple trees and lilacs bloomed more than a full month later than they did back in Massachusetts. The island’s position above the 45th parallel resulted in a condensed growing season. Thoreau probably realized that the vegetation in this place didn’t adhere to the plant records he had compiled back home. Unfortunately, he could spend only a few days studying plants before he had to continue his journey.

The favorable and cool habitat of Mackinac Island causes its lilacs to grow so large that residents refer to them as “trees.” They may be big, but they aren’t necessarily ancient. Their origins probably date to the 1820s, when settlers could have brought them from New England or elsewhere. No printed documentation has been found to confirm this theory, though. In fact, Thoreau’s quick jotting written in his 1861 trip field notebook seems to be the earliest written reference we have to the lilacs of Mackinac. Of course, Mackinac’s bushes still bloom well after the ones in Massachusetts and the rest of the northeastern U.S. The ten-day Mackinac Island Lilac Festival is scheduled to be held June 6-15, 2014.

Today many of us can find lilacs scenting our own yards, neighborhoods, and towns. And today lilacs bloom in the yards of two of Henry Thoreau’s houses in Concord: the one he was born in (Thoreau Farm) and the one he died in (the Thoreau-Alcott House, or the Yellow House). None of these bushes are old enough to date to his time. Yet the plant-to-human reference is here. The resident may be gone, but the purple and white blossoms remain. Perhaps his spirit is hanging around them, too, marking their ” still tender, civil, cheerful, lilac colors.” 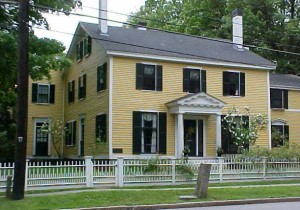 Lilacs at the Yellow House

One response to “Time of the Lilacs”