Death from Above – Life Everywhere

A juvenile red-tailed hawk in the woodlot behind our house roosts regularly in one tall locust tree and one tall pine tree. On a cool, recent May morning, he has slaughtered a large, brilliant red male cardinal and left his prey splayed in a crucified pose on the path that cuts toward the back corner of our property. The cardinal’s wings are angled on the straight horizontal, his head is completely gone, and his formerly fat midsection is now flattened and open, all of its organs absent. A blood-red mass in the middle of his body matches the color of his feathers almost perfectly. One small piece of his innards hangs over his reptilian leg skin and onto the ground. His tail is fanned out perfectly, as if a taxidermist or a museum exhibitor had arranged it in this fashion. 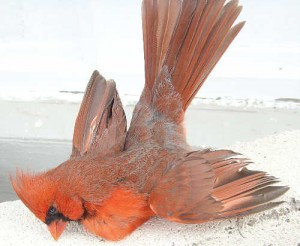 As Thoreau said of the recently dead horse that was lying in the woods not far from his Walden cabin and rotting in the 1850s, “I love to see that Nature is so rife with life that myriads can be afforded to be sacrificed and suffered to prey on one another; that tender organizations can be so serenely squashed out of existence like pulp.” What he meant, and what he repeats often throughout his masterpiece, is that death is the engine of life, death is the substance of birth. Without death, there would be no new life and no raw materials to fashion the next generation of life. This is actually what disturbed those early Victorians most when they first read the works of Charles Darwin. It was not that we were descended from ape-like creatures, nor that we were part of a long line of remarkable living beings to whom we are obviously closely related: all of us from mammals to fish (and even further) have two eyes, two ears, one nose but two nostrils, two arms and two legs–or thereabouts–and one brain. That hawk’s brain looks a lot like your brain; so does that cardinal’s missing brain. 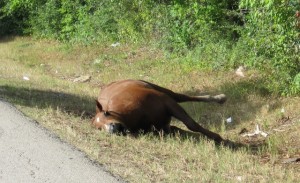 The next morning the caught cardinal is gone, no remnant of the red-tailed raptor’s feast remains, nothing at all except one tiny fluff of still blood-red feathers. Where has that beautiful body disappeared to on this cool and sunny dawn? On this second morning, the juvenile red-tail is still perched above his killing field, his head clicking from side to side, his eyelids batting quickly, his talons clutched tightly on the wide branch beneath. Later that afternoon, he is joined by a second hawk, the two vigilant hunters standing only inches apart, their eyes surveying the wide farm fields and woods toward the low mountains beyond, off in the north and the west. All cardinals in this neighborhood of ours–beware!

Comments Off on Death from Above – Life Everywhere