Suddenly, it seems, my field of vision is crowded – from accustomed long sightlines over sweeps of terrain it has narrowed to pinholes and hints of what’s beyond. The greeny leaves have unfurled, and I am back in the lime-lit world of the immediate. Also now, the merest stir of air lends an arrhythmic wobble to each leafy mobile as the breeze passes, and even a mild wind bends whole branches to its will. All of this news is sung each morning; starting just before 4:00 a.m. with the birds, spring is expressed.

That it has been a cold spring is a still strong memory, and perhaps that accounts for the sudden feeling of the leaves’ arrival. The buds swelled early, it seemed. But the buds always swell well before they offer leaves. We wait out the days of their return.

Much has been made recently of spring’s surge to earlier and earlier expression, and Henry Thoreau’s records of its advent have offered the sort of precise observation that satisfies scientists and floats popular narratives. Boston University scientist, Richard Primack, has made compelling use of Thoreau’s work as part of the tsunami of evidence that suggests our climate is changing.

Here, at the Concord school where I work, we have our own modest set of observations that add to this legacy of looking for spring. One of our scientists has been photographing the maple tree behind our meeting house for the past 8 years, and one of the occurences he has tracked is the date of the first leaf on the tree. This May 11th our first leaf appeared – and we haven’t been this late for leafing out since 7 years ago. This spring is almost 2 weeks later than what we’ve been experiencing for the past 2 years. 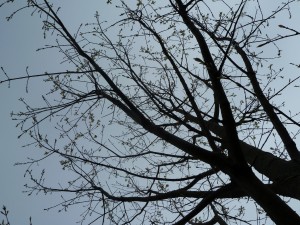 It’s modest example, but of such variability is public skepticism of climate change made. We are, with our 360-degree sense of touch, characters of the immediate; even in our most cerebral and farsighted moments what touches us often varies from what prolonged observation and reason support.

Today, the wind is from the south, and the hazy air is thick with the scent of lilacs; we’re only a few degrees short of drowsy. Stringing the steel wire of will to long-term findings and change is hard work for this immediate animal, especially as the body feels the soft stir of warm air that it loves.