Posted on March 9, 2014 by Sandy Stott | Comments Off on Having Gall

This winter I have been so busy watching and worrying about the little birds hunkered down in our evergreens, that another resident of our yard completely escaped my notice.

This story begins with the tall shrub that stands in front of our picture window. I don’t know its species or even its common name. It gets pink flowers in the summertime. It’s not a Rose of Sharon, a hydrangea, or a rhododendron. For now, let’s call her Eleanor. She had been cut short before we moved here. She spent most of last year growing tall and wide and leafy. I’ve since roped her in a bit in order to train her to grow up instead of out, because she’ll have to clear the roofline this year. I will admit that she does bloom nicely.

All winter long, Eleanor just resembled a vertical stack of bare sticks. I’ve been looking past her for months to admire the falling snowflakes. Only recently did I notice a lump on one of her branches. I trudged outside in the snow to get a closer look. It must be an insect gall. Some little critter has been spending the winter safely tucked inside it. And whenever it senses that the time is right, it’ll eat its way out and join the ecosystem of our fine neighborhood. Who knew? Not me, until now. Our mailman brushes past this bush six days a week as well, without giving it a glance. The gall blends in with the landscape. 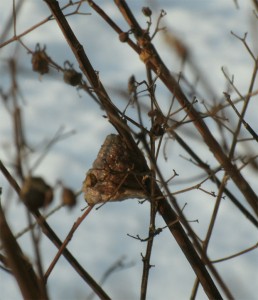 All I know of galls is that an insect deposits an egg into some sort of plant matter in the fall. The plant secretes something that encases the egg, thereby unduly protecting it and giving it a future food source. A gall may look cancerous, but most of the time, it doesn’t result in an adverse effect to its host. And specific insects choose specific plants. The two are somehow perfectly matched. I usually associate them with goldenrod. I almost always find a marble-sized mass stuck in the middle a few stalks standing in a patch of goldenrod. But now that I have another example right in front of me, I think of how amazing this entire process is. And wouldn’t you know it? When I went outside to take a photo of it, I found a second similar gall on another branch of Eleanor, too. One of these days, we’ll have two new residents. 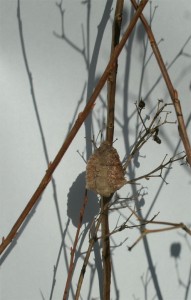 Our old friend Henry Thoreau found galls on goldenrods, too. But most often he spied them on oaks and willows. In his journal on June 1, 1853, he spent a few lines considering this phenomenon.

“It is remarkable that a mere gall, which at first we are inclined to regard as something abnormal, should be made so beautiful, as if it were the FLOWER of the tree; that a disease, an excrescence, should prove, perchance, the greatest beauty, — as the tear of a pearl.”

Thoreau must have taken some time to ruminate on galls and their greater meaning. Nearly two months later, on July 30, 1853, he wrote about them again. By now he could find a related human-sized metaphor.

“[An insect gall completely changes] the destiny of the plant, showing the intimate relation between animal and vegetable life. The animal signifies its wishes by a touch, and the plant, instead of going on to blossom and bear its normal fruit, devotes itself to the service of the insect and becomes its cradle and food. It suggests that Nature is a kind of gall, that the Creator stung her and man is the grub she is destined to house and feed.”

Well, I don’t know that we have to go THAT far.

Nevertheless: Two specific insects who have been attracted to this specific bush – Eleanor — have used her to their advantage for many months. Soon they will leave as anonymously as they arrived. The only notice I’ll have is to suddenly see a small hole in each one of these hive-like cases. And then they will be gone, off to do whatever tasks are left for their little insect souls to do. They’ll get no fanfare, no trumpets, and no applause. And I’ll bet that not even the mailman will notice.

Come to think of it, that does sound a lot like us.