Posted on March 13, 2014 by Sandy Stott | Comments Off on Crazy Cardinals

Do you have a crazy cardinal? We do, and he is so crazy right now that we are starting to worry. Let me begin at the beginning. We had our first crazy cardinal when we moved to the countryside of Virginia . . . in 1978. Since then, whenever we have lived even a mile or two from town, we have had one crazy cardinal, or two, or three, every winter. How do we know? It is easy.

Around this time of year, almost like clockwork, in late February or early March, a banging sound begins on our windows. It sounds at first as though a neighbor might be throwing something at the window, whether we have neighbors or not. Then it sounds so repetitious that we realize that it must be a big branch banging on the glass, or falling icicles, or some other repeated natural sound. Then we remember, Cardinal . . . winter . . . crazy cardinal. 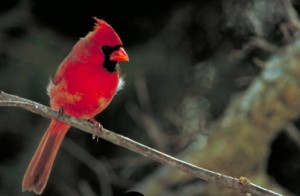 Bang! There it went again, just now, while I was typing this sentence. Bang! . . . and again. I am not making this up. He is banging into our lodge-room window right this minute. And before that he was banging against the dining room glass, and before that, when our car was parked in the driveway, he was flying from a nearby forsythia bush . . . bang . . . into the glass of the passenger window. Then he would see his reflection in the side mirror and, bang, he would fly into that reflective spot. He would even rest on top of the side-view mirror, waiting until he saw his reflection in the larger window again, and then . . . Bang! There it went again. Just now.

In the wild, this means that a successful male chases all of his competition away, so that each male cardinal is left with the female or females in one special area and he can get on with the business of mating and creating this year’s cardinal family.

Bang! There it went again, bang! Twice in ten seconds. The only way to stop him is to put a piece of cardboard on the offending glass, move the car, or wait for the sun to shift the reflective surface. I had better go get the cardboard now, and let this poor cardinal get on his with his mating, his nest-building and fathering. After all, I want to help him to be a good cardinal. These crazy cardinals actually seem to be the smart ones. 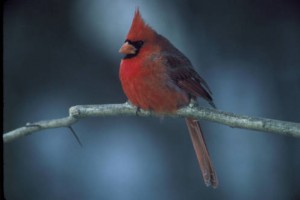 Ashton Nichols holds the Walter E. Beach ’56 Distinguished Chair in Sustainability Studies, Environmental Studies and Science and is Professor of Language and Literature in the Department of English at Dickinson College