“I have been into the lumber-yard, and the carpenter’s shop, and the tannery, and the lampblack factory, and the turpentine clearing; but when at length I saw the tops of the pines waving and reflecting the light at a distance high over all the rest of the forest, I realized that the former were not the highest use of the pine. It is not their bones or hide or tallow that I love most. It is the living spirit of the tree, not its spirit of turpentine, with which I sympathize, and which heals my cuts. It is as immortal as I am, and perchance will go to as high a heaven, there to tower above me still.” ~ Henry Thoreau, “Chesuncook,” The Maine Woods

I used to live in a second-floor apartment that had a view of a driveway, a garage, a woodshed, a hillside, and a sunken backyard complete with garden cottage. Standing in the midst of it all was a full and picture-perfect Douglas fir. A Christmas tree allowed to go wild, perhaps. She stood almost three stories tall. 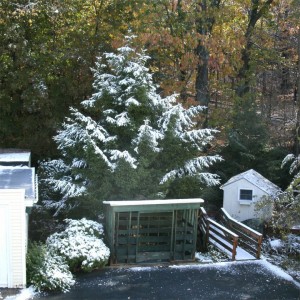 I called her Momma Tree because she supplied shelter for many of the birds in the neighborhood. Cardinals, blue jays, juncos, chickadees, sparrows, and mourning doves all hid in her dusky green depths, at one time or another. When the nearby bird feeder was stocked, everyone politely took turns launching to it from her branches. Oh, a few squabbles erupted every once in a while. The noisy blue jays often seemed to be the culprits behind the disputes. But Momma Tree was a comforting presence to all. It seemed rude to start a fight at her fingertips.

One day, the air was filled with big wet snowflakes. Hour after hour, they kept falling. Hour after hour, they combined to lay down a beautiful blanket of thick, heavy snow. By nightfall, Momma Tree was covered. Her once-perky arms now aimed straight down toward the ground. She still stood tall, but she was burdened. I wasn’t sure if she would recuperate from the encounter. 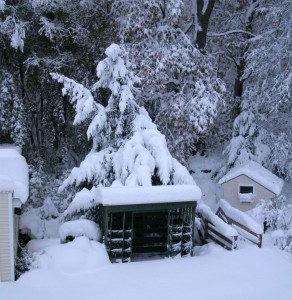 M-tree points to the west from which came the storm.

The next day arrived with a bright blue sky. The sun popped over the hillside in full blast. When I looked out the window, I saw a poof! of snow falling off Momma Tree. A sunbeam had helped her begin to shed the weight. I plopped myself down with a cup of tea to witness the rest of the show.

If you asked for an explanation from the guys on The Big Bang Theory, they would assess the scene as a sample of pure physics. Sunlight hits a snowy evergreen branch. The warmth on the dark green needles and brown bark turns the adjacent snow into water. The process of melting causes a frozen chunk to release its grip and slide off the branch. Suddenly relieved of this weight, the flexible arm of needles bounces back and upward. Since a body in motion tends to stay in motion, the up-and-down swaying lasts until its momentum can fade to stillness again. In the process, more snow slides off that branch. When the falling snow or the branch hits other branches, a chain reaction takes place. More branches sway, and more snow falls. An occasional light breeze may aid in the process, too. Soon the whole tree appears to be alive, shaking off its cold and unwanted covering as easily as a dog sheds suds after a bath. It’s just that easy.

I watched Momma Tree shuffle off that snow until the sun sank behind the farthest hill. She was almost entirely green again. All of her branches had bounced back but for one. It still carried a frozen mass that looked like a white Persian cat, with its eyes closed in sleep and its nose flush to the tip of the greenery. Its fuzzy legs dangled down on either side of the branch. That part re-froze when the temperature dropped overnight. It took Momma Tree the rest of the week to rid herself of the icy snowcat. Then she was back to normal.

Of course, I know that trees are living things. But until that afternoon, I had never seen a tree actually do something, really undertake a task. Momma Tree had a “living spirit,” all right. I felt honored to have seen her in action. I felt an even greater connection to her from that moment on.

Don’t believe that a tree can move on its own? Watch a snow-covered evergreen on a sunny winter day. The poof! you see as the first sunbeam hits the ice will be your invitation to pay attention.

I moved away from that address in July 2012. That’s the last time I saw Momma Tree. Before I left, I walked out to thank her and to wish her well. I heard the wind whispering through her needles in reply. I think about her from time to time, and I wonder how she’s doing. How many birds is she boarding? How did she deal with this last snowstorm? I will never forget the priceless lessons she taught me: about the aliveness of a tree, and of the value of time spent on one winter afternoon, just sitting and watching.