After the latest storm blew through (leaving a good deal less than hyperbole’s prediction), we thought it a good day to strap on winter’s big feet and snowshoe out to a nearby point for a look at the February ocean. Back in post-thaw January, when the cold returned, the whole salt bay had been iced over, and some of the cast-up chunks of sea-ice had been the size of Volkswagens. What, we wondered, might the rising sun angle have wrought, even amid the long cold and repeating storms?

After the usual remembrance and wrestling with our bindings, we ‘shoed up over the plowed berm and out along the track into the woods. The winter-blue sky was deep and the northwest wind stripped sleeves of snow from the trees, seeding the air with snow-grains that curved and recurved like flocks of tiny birds. Snowshoeing is slow going, and it took us about a half-mile to remember this. But then we stopped trying to stride forward (which catches the toe of your ‘shoe, pitching you forward) and fell into its deliberate lifting rhythm. We were in no hurry.

Under the few inches of new snow, the recent rain-crust cracked, dropping a half-foot at every step in oversized indentations. We were leaving monster tracks; some explorer, stumbling across then for the first time, would be wary – how big must this creature be to leave such tracks? As we ‘shoed on, leaving a path of possible wonder, I fell to thinking about our far western cousin, Big Foot himself. (There have, I’ve read, been sightings of Big Foot in every state, except Hawaii.) 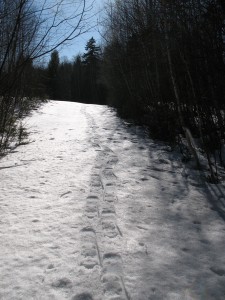 Grainy fabrications aside, all we have of Big Foot are his (or her) tracks. But unless some descendant of the Merry Pranksters is out there in the dark woods of the Pacific Northwest, strapping on outsized feet and striding gleefully through any available mud, there is something/one out there. Big Foot was on my mind because I’d recently read (here is the Thoreau connection) Robert Sullivan’s old Big Foot article in Outside Magazine. (Sullivan, you may recall, is the author of the recent The Thoreau You Don’t Know, one of my favorite modern works about him.)

From the article, originally published in Open Spaces, an attractive journal also from the northwest, a few things became clear: first, Sullivan – always drawn to quirky subjects – must have smelled a book in Big Foot. But, as he visits with various Big Foot searchers (and “researchers”), the loopy nature of the Big Foot community comes clear; circles of rivalry and self-reference form the spin of excitement and myth that keeps Big Foot alive. And yet, despite the outsized estimates of his (or her) size – upwards of seven feet and perhaps 1,000 pounds – Big Foot remains seldom seen. And undocumented.

All this mulling and slow ‘shoeing brought us to the sea, which shimmered under the race of wind and the angled sun. We walked along the bluff above the water, and as we did, we followed also fresh coyote tracks, three or four coyotes if I read the overlays well. Partway out to the point we reached a point of convergence – the tracks radiated out from a short slide down the bank next to an overhang; we must have been right above the den. Pulses a little elevated, we waited. The wind kept hurrying through the woods; the sea sparkled; we were awake to the possibility of other lives.

Then, we walked on. Any tracks we crossed were now heading the other way. Thoreau often sketched the tracks he found into his journal; they were the calligraphy of other lives, their sentences. And from these sentences emerged a sense of a world both real and mythic.

We ‘shoed on, leaving our big-footed tracks.

Comments Off on Big Feet