In Search of White-Headed Eagles

I should have known that the place would be packed with cars and people, because our newspaper had run the story on the front page. Dozens of bald eagles had been spotted fishing in the open water by a dam in the lower Susquehanna River valley, the reporter said. The rest of the river was encased in ice. But with temperatures rising, the scenario could soon change. The ice would melt, and the birds would find other fishing options and would leave. What else could we do? We don’t usually see eagles around here. So off we went, for an eleven-mile countryside drive downriver to the Safe Harbor Dam. 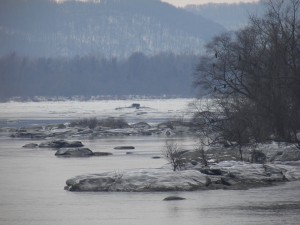 It was noon by the time we got there. We earned a front-row parking space only because someone else was leaving when we arrived. Bunches of avid birders were lined up along the shoreline. Some of their scopes and lenses were longer than my arm. A few low and quick conversations murmured in the background. You could identify the many amateurs, like me. We just wheeled our little binoculars toward anything that was in the air. Turkey buzzards, gulls, crows, whatever. Could you see a white head and white tail? No? Darn. Where were all of these silly eagles, anyway?

I’m not totally new to these sightings. I’ve seen bald eagles in the wild on a few occasions. Most often it was when I lived in the Midwest, within a few hours’ drive of the Mighty Mississippi. River towns in Illinois, Iowa, and Wisconsin hold eagle-watching days at this time of year. Whenever the surrounding landscape is blanketed with snow, the eagles flock to fish the dams. I once saw 15 bald eagles sitting in a tree at Guttenberg, Iowa, and watched as they took their turns diving down to the water. That’s a special and vivid memory for me.

But there’s nothing quite as spectacular as the unexpected encounter. On a murky winter day in December 1996, I was driving south along the Mississippi River from Minnesota to Wisconsin. The river was to my left – looking like a flat white meadow — and my car and I darted among the high sandy bluffs. Suddenly I saw a large black bird flying at our level, over the river. My mind zipped through a series of mental flash cards to identify it. When it matched the size with the white head and tail, it sent the answer to my mouth. “Oh my god, that’s an eagle!” I said out loud to myself, several times. I got a real-life shiver along my spine. And then he wheeled out of sight.

Henry Thoreau may have felt this same magic when he saw a bald eagle flying over Fair Haven Bay in the Sudbury River in April 1854. He had recently bought a new spyglass and suddenly found a good reason to use it.

“Saw a large bird sail along over the edge of Wheeler’s cranberry meadow just below Fair Haven, which I at first thought a gull, but with my glass found it was a hawk and had a perfectly white head and tail and broad or blackish wings. It sailed and circled along over the low cliff, and the crows dived at it in the field of my glass, and I saw it well, both above and beneath, as it turned, and then it passed off to hover over the Cliffs at a greater height. It was undoubtedly a white-headed eagle. It was to the eye but a large hawk.” ~ April 8, 1854

“Lying on the ground with my glass, I could watch him very easily, and by turns he gave me all possible views of his wings curved upward slightly the more, like a stereotyped undulation. He rose very high at last, till I almost lost him in the clouds, circling or rather looping along westward, high over river and wood and farm, effectually concealed in the sky. We who live this plodding life here below never know how many eagles fly over us. They are concealed in the empyrean. I think I have got the worth of my glass now that it has revealed to me the white-headed eagle.” ~ April 23, 1854

But back at Safe Harbor on this day, among all of the other glass-wielding watchers, I found I didn’t have the patience or the proper attitude for eagle-watching. The sun was too bright. The birds weren’t hungry or restless. They weren’t flying or fishing. Some of them sat in trees on little islands that were too far away for me to focus on. When I caught a glimpse of a golden eagle flying overhead, I didn’t point him out to anyone else. He could remain anonymous and unremarkable this time. The stars of this show were supposed to be the ones with the white heads and tails. I eased back behind the wheel and slowly maneuvered us and our car out of the congestion and back into the open countryside. I’ll come back when the eagles outnumber the people.

One response to “In Search of White-Headed Eagles”