I Meet the Happiest Dog

In the white air
of this storm
he is
wherever
you are.

Perhaps it is the full air, all that cold contact with snowflakes that must feel like so many cold noses, but whenever I meet dogs while walking through snowstorms, they seem inordinately happy. This goes especially for capering labs, who set up also resonance with the memory of our yellow lab, Elmo. 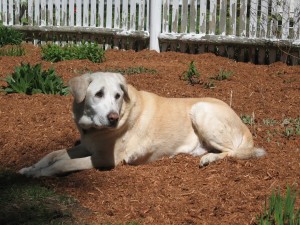 Elmo in another season

A walk, any walk, was the day’s celebration for Elmo, but snow was a holiday – snow was for snuffling and rolling; snow was the right substance for “tossing a nutter,” the sudden break into sprinted circles that mystified us even as he blurred with speed and stirred snow. When he stopped, Elmo would look at us expectantly – why, his eyes seemed to say, aren’t you running in circles? How can you stand still? Then, he’d bark once and be off, following whatever thread of scent or thought ran ahead of him.

The other day, walking the river as it snowed, I met Elmo’s chocolate cousin (many times removed). He stopped, looked up happily, expectantly. “Grrrreat!” he seemed to bark; then, he was off, snow flying up from his paws, the whole forest within reach. 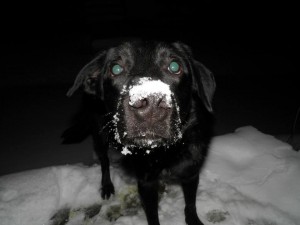 Charley K on a best day

Henry Thoreau referred to most dogs as “Bose” or “Trey,” common canine names in his day. Here, I think he missed out. There are few (no?) better companions for “cross-lots walking,” the sort Thoreau preferred.