Like many, if not most, readers of The Roost, we have recently had the coldest cold-snap in recorded memory. In our neck of the Eastern woods, the mercury has hovered in the single digits for days, and it has reached 0, and 1, and 2 degrees Fahrenheit (that’s -18, -17, and -16 (or thereabouts) Celsius for you more sensible European counters) at night. The days have not been much better, single digits for almost a week and more cold forecast into February.

Today we had a warming spell: 15 at sunrise, then 20, 25, and now 35 outdoor degrees on my indoor/outdoor thermometer. In our wood-heated home, the indoor temp is a wonderfully warm 67 F. We were standing at the kitchen window, just a few minutes ago, drinking our afternoon coffee when my wife said, “Look at those birds, they are bathing in the snow in the birdbath. “

And there, sure enough, were a dozen or so English sparrows, sitting on the hard frozen surface of their summer birdbath, with 2-3 inches of recent powdery snow on top, and they were shuffling and fluffing, and pecking, and doing all of the things that birds do in the summer when their birdbath is full-up with clean fresh, and always unfrozen, water. But now it was icy cold winter.

We had never noticed this phenomenon before, so we stopped what we were doing, and we stood at the kitchen window, and we watched those cute little birds taking their icy cold birdbaths in the fluffy cold snow all around them. They shook their chests as hard as they seemed able, they kicked the snow up onto their fluffy breast feathers, they hopped a little and ruffled their feathers a lot, and they made nice little circles of open space on the hard-frozen water beneath them. 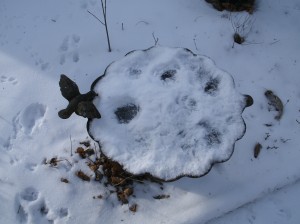 I went outside to make sure that the water had not started to melt and, sure enough, it was as hard-solid as an ice skating rink, with only the tiny sparrow claw-marks and striped feather strokes pushing the snow away from the frozen ice surface beneath. After I came back inside, the birds would return for a minute or so, then something would spook them and they would fly off again, into the nearby trees, waiting for the chance to return to their snowy ice bath; after all, it was still winter.

Birds bathe, not because they want to be clean as we humans do, but because they need to get the dirt and the lice and the mites out of their feathers, partly so they do not weigh more when it is time to take to the air, but probably most of all because those other little living critters must make them crazy as they nip and nibble and latch onto the bird’s skin underneath that tight surface-covering of feathers. Ornithologists also report that bathing is essential in order for birds to retain necessary oils in their plumage, oils without which the birds could neither fly nor survive.

So here were out little creek-side sparrows (we live within sight of the creek), with no birdbath-water in sight, bathing in the snow on an icy birdbath in order to retain those precious oils and keep those nasty parasites at bay. As Samuel Taylor Coleridge might have said, these little birds were “miracles of rare device.” As Henry David Thoreau did say, “I once had a sparrow alight upon my shoulder for a moment [. . .] and I felt that I was more distinguished by that circumstance than I should have been by any epaulet I could have worn.” That is how we felt today, watching our local sparrows snow-bathe in front of us: honored and distinguished, lucky to have chanced upon this little moment of sparrow-life that still seemed so special to us.

Comments Off on Snow Baths