In my 22nd year, I spent an end-of-the-road winter in a wood-heated house with no insulation or plumbing. Well, there was a hand pump, but its leathers froze when true cold arrived, and, that winter, true cold never left my midstate New Hampshire valley beneath the mountain I saw as a friend. So, I burned my semi-dry wood, melted snow and adapted to bathing once a week on a plywood sheet in the dooryard. I learned to choose windless days for that.

My nearest neighbor was a half-mile away, and most days I wandered the valley and ridges on snowshoes and thought about what I might write. Writing had been, ostensibly, the reason for moving there, but really I’d moved into winter’s absence because of an absence of ideas in the aftermath of college.

Rescue from aimlessness arrived when it snowed sufficiently. Then, my neighbor, Donald, who was also the town’s road agent, would pull up in the town plow and hire me as co-driver. Really, I almost never drove; my job in the shotgun seat was twofold: keep Donald awake; dig the wheels free when he slid into a ditch. I grew reasonably adept at both, telling Donald long, convoluted stories about hippies – with my long hair and beard, I was the valley’s sample – and their reasons for wanting to drop out into valleys like ours, or making dopey jokes, which made him laugh enough to stay on course…most of the time. When Donald slept or caught his blade on the edge of a ditch and we yawed into it, I’d dig out the wheels, while he napped or strung a come-along to a tree across the road. Then, we’d struggle out and return to freeing the 65 miles of town road that were Donald’s domain.

But this is a story about a storm when Donald never arrived. In fact, it was an 8-inch snowstorm that no one plowed, and I was reminded of it during the recent uber-cold snow that fell on us all. Here, in Maine, the temperature topped out at minus 2, even as snow filled the air; in the evening it was minus 7 by 9:00, and that was a few miles from the sea. Inland, temperatures dropped as low as a stunning minus 42. 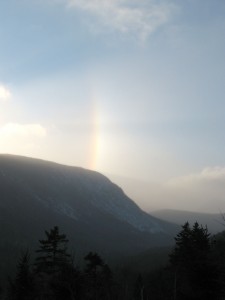 More Rare Snow – in this case a Snowbow

A long life of weather-watching has given me a broad sample of experience, but this week’s frigid snow is only the 2nd such snow of my life. The other was the day that Donald stayed home.

Well, that was my thermal lowpoint (and it stands still today), and I dressed and went out into this wonder. It was absolutely still. But the trees were in voice, or, more accurately, full complaint. Snaps, groans, pops and general tension echoed all around me; it felt as if the whole sky weighed more than usual. My nose-hairs webbed immediately and my breath caught in my throat. The winter I knew felt transformed; the cold had made the land alien.

Later that day it snowed a windless snow, a snow so light that 8 inches later I cleared it from the doorway with two sweeps of a broom.

This week’s snow was that light.