In my five-and-a-half decades of taking breath on this planet, I’ve lived within the boundaries of some of our major American watersheds: the Chesapeake Bay, the Ohio River, the Great Lakes, the Upper Mississippi River, and the Connecticut River. But it’s only in this last year that I’ve paid almost daily attention to the water course now flowing closest to me, the Susquehanna River. Mostly because my weekday office sits just a block away from it.

Though I rarely go down to its edge, I often look at the river from our second-story windows. I’m amazed at how its appearance differs daily, even from this distance. In dramatic weather, it changes hourly. Here its mile-wide span must surely affect our own east-bank weather, especially on those days when fog or snow flurries swirl around our building. Not bad for something that begins in Cooperstown, New York, as a stream small enough to jump across. (Yes, I’ve done this.)

Henry Thoreau seems to have written most often and experienced his most introspective moments when he was near water. I don’t believe this was by accident. Yes, he documented the seasonal growth and infinitesimal changes in his local flowers, plants, bushes, and trees. But he knew that – the sky, notwithstanding — nothing on earth illustrates drama better than a body of water. He learned this information firsthand, after paddling the Concord and Merrimack Rivers for two weeks and after living at Walden Pond for two years.

Many quotable passages about rivers and lakes can be found in Thoreau’s writings. Here are a few of my favorites:

“A lake is the landscape’s most beautiful and expressive feature. It is earth’s eye; looking into which the beholder measures the depth of his own nature. The fluviatile trees next the shore are the slender eyelashes which fringe it, and the wooded hills and cliffs around are its overhanging brows.” ~ “The Ponds,” Walden 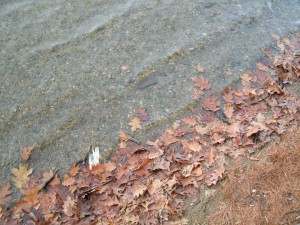 “For the first time it occurred to me this afternoon what a piece of wonder a river is – A huge volume of matter ceaselessly rolling through the fields and meadows of this substantial earth making haste from the high places, by stable dwellings of men and Egyptian pyramids, to its restless reservoir. One would think that, by a very natural impulse, the dwellers upon the headwaters of the Mississippi and Amazon would follow in the trail of their waters to see the end of the matter.” ~ Journal, September 5, 1838

“A river is superior to a lake in its liberating influence. It has motion and indefinite length. A river touching the back of a town is like a wing, it may be unused as yet, but ready to waft it over the world. With its rapid current it is a slightly fluttering wing. River towns are winged towns.” ~ Journal, July 2, 1858

Naturally, nothing can beat the following quote. And in my mind, it has absolutely nothing to do with the act of catching a fish.

“Time is but the stream I go a-fishing in. I drink at it; but while I drink I see the sandy bottom and detect how shallow it is. Its thin current slides away, but eternity remains.” ~ “Where I Lived, and What I Lived For,” Walden

Metaphor was one of Thoreau’s favorite literary devices. An ever-moving river makes a terrific symbol for time and eternity. Here Henry gives us two concepts (and many more, if you read the rest of this passage in the book). The first is that each one of us could be the hook at the end of the thin filament of a fishing line, cast into the current of Life. We each make an inconsequential drop into the watery world. Plop! We’re just that tiny, in the grand scheme. But we’re invisibly connected to the other little plops – uh, people – who are traveling downstream, too. We’re all in this together.

The second idea is about living Life fully and deliberately: “drinking” at this stream. Thoreau goes on to say, “I would drink deeper.” I interpret this wish as saying, “I would like to stay on this earth as long as possible and do more exploring into it. There seems to be not enough time to do and see everything that I want to.” We all feel this way sometimes.

No matter where he went and what others he saw, Thoreau’s favorite river remained the Concord. Maybe its attraction was not just that it was his hometown waterway. Maybe it was the pace of the Concord that was more to his liking. Its current is often barely discernible. Just like the courses of our daily lives and the progression of Life.

As this year winds down, I think I’ll spend a few minutes sitting beside the Susquehanna, just watching. I can contemplate the passage of time: the past, the present, and the future, all at once. I can consider my own small cast and what adventures may lie ahead for me at the next curve. The river doesn’t know 2013 from 2014. It just flows on from one day and month and year to the next. It heads for the Chesapeake Bay and the Atlantic Ocean, doing what it has done since the last glacier receded. When it meets an obstacle, it either passes around it or, if the object is light enough, it carries the weight along until it can find a place to drop it. 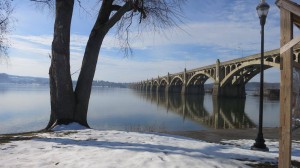