What a Piece of Wonder a River Is: Part Two

Posted on January 12, 2014 by Sandy Stott | Comments Off on What a Piece of Wonder a River Is: Part Two

In the “Time is But a Stream” post of December 31, 2013, I wrote about the Susquehanna, my neighborhood river. I included a beautiful photo of it taken by my friend Bob Hollis on the blue-sky afternoon of December 21. Ever since, I’ve continued to look at the river, to think about it, and to consider Thoreau’s metaphors about rivers and eternity and how time flows by and with us. And we, with it.

Then the “polar vortex” hit. When I next peeked at the river from our second-story office window, I saw solid white instead of fluid gray. It had frozen over. Single-digit temperatures had turned this mile-wide liquid stream into a chunky ice-covered meadow. What an amazing sight it had become! And so quickly, too. I could barely stop admiring it. I could barely stop smiling at it. I had to go down to its edge and take a closer look.

Of course, the Susquehanna wasn’t completely frozen. Areas of open water lay next to the nearest bridge. And somewhere beneath the ice, a current was still heading for the Chesapeake Bay, fifty miles away. Fish and other critters must still be surviving in its chilly depths. But when I looked downstream, all I could see was the jagged white stripe of a cold and arctic landscape. “Surreal” was a word that came to mind. I almost expected penguins and polar bears to materialize on the horizon.

This wasn’t the first time I had seen changes to a major body of water in winter. On my first-ever visit to Concord, Massachusetts, in December 2000, I found Walden Pond under a seamless layer of snow. If it was truly the “earth’s eye,” as Henry Thoreau considered it, then it had quite a blind or albino gaze that day. I’d also seen a snow-covered Mississippi River separating Illinois from Iowa, during the years when I lived in the Midwest. You had to know where the river was, back then. Otherwise, the space was just as flat and white as the buried cornfields beyond its steep banks.

No, it was ice that capped the Susquehanna this week, not snow. Occasional sunlight sparkled off a myriad of sharp and crusty points. It was as if the roof of a cave had landed upside down in our midst. Or, closer to home: it resembled the shaggy crystals that hang along the sides of a kitchen freezer that hasn’t been defrosted in a while. (I know of what I speak.)

This unusual sight was enough to prompt a few Thoreauvian metaphors and philosophies to swirl in my head: how unforeseen challenges can suddenly change the consistencies of our lives; or how time can seem to be suspended, or even stopped, when we least expect it. And yet we all go on; we have no choice but to somehow “go with the flow/floe,” and pause when it pauses. Yes, the river was even more beautiful and interesting and thought provoking to me than it had been before. I felt as if it were putting on this special show for me alone.

Then, a few days later, the local media took notice. The state of the Susquehanna was a top story on the six o’clock news. Was the ice dangerous? How were the ice chunks moving downstream? Would they cause flooding when the air temperature rose and the ice began to melt and move? Were any of the river-edge residents in the adjacent cities and towns in jeopardy? Authorities were said to be “watching it.” Well, so was I. Join the club, I thought. Where were you when the first ice patch materialized?

While their concerns were no doubt valid, they bothered me. It seemed narrow-minded and nearly rude to focus on the hazards of the ice, and not the marvelous beauty of it all. As is too often the case, the newsfolk brought their negative brand of reality into my icy fantasy world. The Susquehanna may flood, or it may not. And we’ll just have to deal with what comes with our now-warmer temperatures. Either way, Thoreau was right. What a piece of wonder a river is! 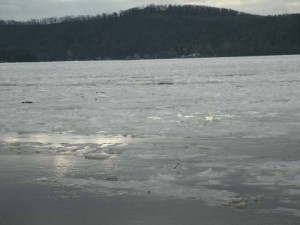