March of the Woolly Bears

I see two of those black and red-brown fuzzy caterpillars in a mullein leaf on this bare edge-hill, which could not have blown from any tree, I think. They apparently take refuge in such places. One on the railway causeway where it is high, in the open meadow. ~ Henry David Thoreau, Journal, January 24, 1858

They’re on the move! In these days of autumn, we most often see woolly bear caterpillars marching across the asphalt in front of our cars. They sometimes make driving difficult, if we have heart enough to avoid them. (Imagine the explanation: “Honestly, officer, I had to swerve because of the woolly bear. I can’t imagine how that tree caught my right front bumper.”) 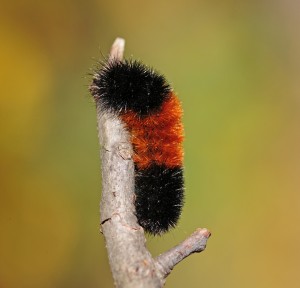 When I was young and found one of these guys in our backyard, I picked it up and let it curl into a fuzzy ball in the palm of my hand. My father would say, “Take it in and show Mom.” I gleefully did this. It was always good for a shriek. Then I had to carry the caterpillar right back outside and place it back in the grass, as per my mother’s orders. After a while, it would unroll itself and go on with whatever business it had been doing until my small fingers found it and interrupted its task.

Isn’t it interesting that we recognize these fellows almost solely in their caterpillar state? In the spring, the woolly bear becomes the Isabella Tiger Moth (Pyrrharctia isabella), with tan wings decorated with a few black spots. No traits from its larva state remain, and no clues would ever lead us to connect the two. I guess a tan moth isn’t flashy enough to attract our attention. A black and brown-banded critter walking by is much more eye-catching. Maybe its fuzziness pleases us, too. It has a teddy-bear quality that makes us want to pick it up and hold it.

Like Henry Thoreau, I’ve seen a few woolly bears during the winter months. Then, their colors create a startling contrast to an otherwise gray and white world. But it is in October that I most often spy woolly bears. After I watched one going about its business on a crisp October afternoon, I wrote a series of haiku stanzas as a tribute to it.

Safe travels, small one
I watch you touch the milkweeds
And then disappear

The woolly bear has also been credited with having as much meteorological knowledge as a groundhog in February. Folklore states that the width of the middle band indicates how difficult the upcoming winter will be. The wider the ribbon of brown, the milder the winter. Some scientists have actually taken measurements of hundreds of caterpillar bodies over the courses of many years, in order to prove or disprove the theory. Their results are still inconclusive.

I’m glad. I prefer that woolly bears remain mysterious, fuzzy, and portable enough for a child’s palm. I make every attempt to brake or to drive around them, as they (and we) march toward winter.

Comments Off on March of the Woolly Bears