“I rejoice that there are owls…All day the sun has shone on the surface of some savage swamp, where the double spruce stands hung with usnea lichens, and small hawks circulate above, and the chickadee lisps amid the evergreens, and the partridge and the rabbit skulk beneath; but now a more dismal and fitting day dawns, and a different race of creatures awakes to express the meaning of Nature here.” Thoreau, “Sounds,” Walden

I have no photo. I was running. And yet I have the composite memory of a long minute; in that memory I work to keep the bird at real size. It expands toward spirit.

It’s surprising to see gray wings low in the forest in the late afternoon light that slants into October. And these wings, motion only to my peripheral left, were the gray of no light at all. Still, I pulled up short, even as the bird pulled up also into the branches of a small oak thirty feet away. Goshawk, I thought, paging through the short sequence of large gray birds I know. Hawk of the deep woods, a goshawk would have been enough; the few I’d seen had winged by with a presence that reminded me how ground-borne I am.

But each of these hawks had been of the canopy, overhead birds. What was this? I walked single step at a time through scrub toward this large gray bird who stayed put at head level. Odd, I thought. Why doesn’t he fly?

At twenty feet I paused, parted the small branches and peered through the last small tree between us; the gray seemed an absence in air. The bird’s large head swiveled slowly to meet my eyes. What eyes! Glint of yellow dotted by a dark circle in each, then a penumbral gray that stretched to the edges of a rounded head – owl eyes. 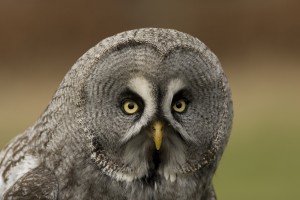 Lazily it seemed, grudgingly, and yes, soundlessly, he lifted from the branch, pumped his wings twice and settled into a small pine, now a little closer, facing me.

Drawn by this presence, but not wanting to spur flight again – it had seemed so unwanted – I stayed put. Both in our tiny white pines, we watched each other. Then, after a long minute I began backing away, eyes still fixed on the owl. When I turned to resume my way, the gray owl was still and there, like a giant’s thumb as he reaches from the dense forest brush into this world.

Note: Once home, I went to bird books and then to the myriad photos of the internet in search of a match. Of the seven owls native to Massachusetts, none came close. The Great Horned Owl had the size, but this gray owl had a completely rounded, hornless head. Under “occasional visitors” I found the Great Gray Owl, boreal inhabitant, the colored-in patch of his range a long way northwest in Canada. The nearest sighting I could conjure came from southeastern New Hampshire. “Occasional” seems to suit this visitor from the other side.