It’s a mild October day at school and the trees are saying, “Look at me”; it’s no day to while away inside, where we have been rooting in some of Walden’s density. “If you stand right fronting and face to face to a fact,” Thoreau writes near the end of Where I lived, and What I Lived For, “you will see the sun glimmer on both its surfaces, as if it were a cimeter, and feel its sweet edge dividing you through the marrow, and so you will happily conclude your mortal career.”

I look up, describe a scimitar and suggest that now’s the time: “Go out onto the back field near the river and find a natural object and get face to face to it. See if you can maintain focus on it for 15 minutes. I think you’ll survive, and if you do, we’ll get together and report back.” Walden, of course, can be read as a report back from such outings. 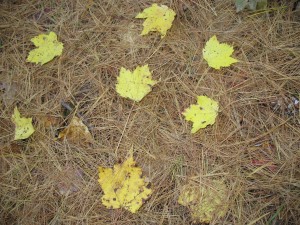 And so out we went.

Here are excerpts from some of their reports back. Sample a few or read them all:

Natalie: When the wind sweeps through the willow branches lifting and spinning them, contrast between the two sides of the leaves highlights the wind even more. The branches seem to be a physical representation of the wind. Most of the time the wind played with the branches swinging them side to side as though the branches were one large gauzy curtain, but a few times, a large gust sent them dancing and bouncing as individual boughs, the ends flying up to meet the upper parts of the tree. Though I did not think I was concentrating very hard, the time seemed to pass more quickly than I thought because at the end of what felt like a short amount of time, not twelve minutes, the grinding of the bell workings (that you can hear right before the bell rings when it is very quiet) startled me.

Matt: Before deciding that I was really going to start, I peaked over at Ben, who was carefully studying a tree. He looked funny… I knew I wouldn’t make it the whole time without tearing that round green whatever apart. “That is a testament to my not being able to sit still,” I thought. It isn’t a huge problem, just something that I get embarrassed about when it gets pointed out. It seems kind of childish. My goal was to make something thoughtful of my time with green whatever. That’s what Thoreau would do. It would’ve helped if I knew what it was. I knew it was natural, and it was oddly round, but I couldn’t fake any grand revelations… As I mentioned in class, I did think about how it could have been explained mathematically, but that thought was brief. At that point it was too late. I had already started digging my nail into the surface, squishier than I would’ve liked.

Phoebe: Throughout the 12-or-so minutes of the exercise, sitting still allowed my focus to shift, letting in a stream of thoughts normally unheard. It occurred to me that this was the first time in a good while – more than a week, certainly – that I had just sat somewhere, on my own, without homework or Facebook or any other distractions. I think that the speed of our lives has increased exponentially since Thoreau’s day. If he lamented (in “Walking”) those folk who did not have more than half an hour each day to spend taking walks, what might he think of us? I think that one of the reasons that Thoreau’s works are so popular is that his message has not merely remained relevant over time, it has gotten more and more so over the years.

Charlie: In Thoreau’s Walden, he compares the discovery of truth to a scimitar held to your forehead, splitting your perspective into two before destroying it entirely. To Thoreau, truth is something that completely changes your perception of an idea. In that sense, I suppose that I did not encounter truth in the time that I spent gazing at a tree on the edge of the soccer field. My discovery was less a scimitar held to my head, and was more akin to a butter knife. My perception of the tree changed during my viewing of it, but the change was not quite so drastic that it destroyed my previous idea of the tree. What I discovered during my viewing was that what I saw of the tree and my understanding of the tree came solely from my perspective, or how I chose to view it. Had I viewed if from its opposite side, I would have come away with an entirely different understanding of what the tree was.

Ben: This tree specifically was one that seemed to be incredibly complex. When I was not focusing on the local tenants of the tree I saw its limb that had been cut off; most likely due to some reason that made it an inconvenience for the academy. I cannot think of a viable reason as to why the limb was cut off but I am also not an expert on trees. But I digress, one of the main areas I focused on was not the severed area, but instead it was how the tree had grown around it. I have never seen this phenomenon, but I have seen pictures of trees growing around street signs and so on. The tree had started to flow over and onto the stump, it was a shape that made the tree seem as though it were full of fluid. But yet it was dense and covered in bark. The tree was growing over itself and reclaiming the space that it once inhabited. This was so visually fascinating that it took up most of the time we were outside. Something I drew from this specific example is nature does not stop for anything. It grows and adapts to what occur around it. 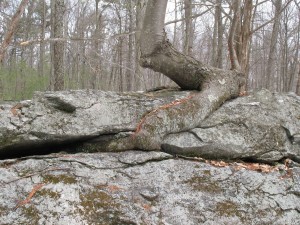 Lauren: But what really throws me off about apple trees and makes me feel the need to speculate as to how they survive is that they seem so friendly. Most wild plants and animals seem competitive and behave as if every other living thing is their enemy. Apple trees, however, seem domesticated. I hardly ever see them in the wild, but they’re often decorative and make frequent appearances in children’s books. Even more so than other fruit trees, apple trees are friendly, and that seems bad for survival. If a plant just lets everything eat it, it will die. But perhaps friendliness is a valid strategy for survival. Once humans domesticate a species, it is pretty much guaranteed not to die out. I sometimes wonder if domesticated cats and dogs aren’t bored and itching to escape, but they are guaranteed a decently long life.

Isaac: I reclined at the base of a tree and settled in between its roots. It was convenient that the first natural object I placed my hands on was a twig with three leaves, for Thoreau uses the number as a motif of sorts throughout Walden. I felt lucky. I had found a relevant symbol and was pleased that I could spend the 10 minutes studying rather than searching. But the roots were too comfortable, my position too sprawled out, and the temperature too mild that I tossed the twig aside and closed my eyes. As I stretched out, the hum of a nearby Hanscom plane crept towards the fields. “All sound heard at the greatest possible distance produces one and the same effect, a vibration of the universal lyre…” Thoreau writes in “Sounds,” and while the plane buzzed overhead very far away and at a great altitude, I knew, as a CA student, that buzzes could quickly erupt into roars. The volume increased as the distance between the plane and me decreased (“While these things go up other things come down”), and, as it puts a pause into classroom discussion, the grand engines snapped any tranquility I was feeling. I sat up again and returned to examining my arbitrary trio.
I found that, as the plane flew away once more, the decrescendo left me in a greater silence than before the plane had arrived. Silence is a peculiar concept, relative and unattainable, yet we treat it as a constant. When the AC in the gym turns off in the middle of exams, silence permeates the space more loudly than any song through a speaker. Thoreau notes that unpleasant sounds, such as trains, are better heard from a distance, while natural sounds, like birds or wind, are beautiful to indulge. But silence is as much a sound as a train or a bird, and, if anything, more valuable, for silence can always become more “silent.” The birds can stop chirping, the wind can stop trickling pine needles; the pencils can stop writing. Sound is relative, yet Thoreau treats it as something absolute. A bird’s chirping usually sounds pleasant, but that is often after leaving a previously loud, or perhaps industrial setting. But as a plane flies away, I do not want to hear a bird chirping. I want this newfound silence to remain.

These and a number of other responses made me glad we had gone out to see the world, to try to envision it via a single fact. We were all that much closer to understanding the ideas and experiences behind the long string of code that is Walden.

One Response to Talking with Henry