It happened to me again recently, when I was quietly talking about Thoreau with someone. She said that she remembered reading the book “On Walden Pond” in college. Yikes! She meant “Walden,” of course: more formally, “Walden; or, Life in the Woods.” But she automatically merged the title with the more recent movie/play, “On Golden Pond,” probably without even noticing or thinking about it. She’s not the first person to do this. I just smiled and shook my head to myself.

The phenomenon must have started soon after 1981, when Ernest Thompson’s play “On Golden Pond” was released as a feature film starring Henry Fonda, Katherine Hepburn, and Jane Fonda. You no doubt know the story. Aging and retired college professor Norman Thayer and his wife Ethel visit their lakeside cabin in Maine for what could easily be the last summer. They entertain and get to know their soon-to-be step-grandson. Their estranged daughter finally makes her peace with her father, although this act doesn’t come easily. The film eventually earned three Academy Awards and three Golden Globes, and it came in second in ticket sales in 1981. Only “Raiders of the Lost Ark” was more popular at the box office that season. 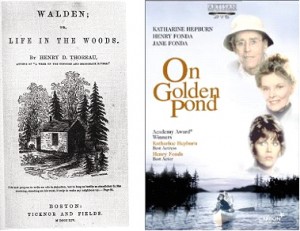 When we meet and greet people and talk about Henry Thoreau — anywhere, anytime, and not only in Concord — they may mis-speak and call Thoreau’s book, “On Walden Pond.” Obviously, they mix the two entities. They know that Thoreau lived at Walden Pond. They’ve heard a similar phrase in the movie title “On Golden Pond,” and so they combine the two, without even realizing that they’ve done it. I estimate that at least 20% of our public does this.

Some Thoreau scholars and enthusiasts are bugged or even aggravated by this recurring mistake. They can be quick to judge and to correct folks. After all, the literary classic starred Henry Thoreau, and not Henry Fonda. I’ve gotten to the point where I no longer chastise anyone or insist upon proper nomenclature. I just continue the conversation and call the book “Walden” and let it go. I hope that the other person’s subconscious mind hears and homes in on the variation as I say the correct title.

I thought that this practice would fade with a younger generation who may not have seen the 1981 movie. But then a TV version was released in 2001, featuring Julie Andrews and Christopher Plummer. And “On Golden Pond” stage shows and related initiatives continue to be held everywhere. It seems unlikely that the tale will ever leave the American cultural scene. This is good, because it’s a great story.

When you stop to consider the two, it turns out that they have more in common than you may see at first. Both are about a man living by a lake in New England. The setting is remote enough to be a bit isolated, but near enough to a town for supplies and society. The man knows the place intimately, and he shares its natural resources with a young person, especially through fishing. “Walden” develops a number of metaphors and analogies in its text, and it seems that “On Golden Pond” borrows a few in its script as well, especially whenever a loon appears.

The big difference is that Henry Thoreau is in his twenties and is generally contemplating the beginnings of his adult life. Norman Thayer is considering the end. Their purposes and approaches are different. Or are they? At their cores, both pieces are about Life and experiences, and about what challenges lie ahead. Never mind the fine line between fiction and nonfiction.

I decided to contact playwright Ernest Thompson to see what he might make of this mix-up. He hadn’t been aware of it. “If there’s solace to be found on the shores of either idyllic body of water,” he said, “it is, I believe, that all of us, occasionally anyway, yearn for a sanctuary away from the madding crowds and the materialism of our increasingly spiritually-corrupt culture.” He said that “On Golden Pond” is “also about the journey to enlightenment, six of them actually, and how those travelers are forced to learn to share the road and adapt their pride and philosophies to align more successfully with others.” As for a connection to “Walden” and its pond and famous resident, he noted that Norman did quote from a few well-known authors. “Had I foreseen the problem,” he said, “I would’ve thrown in a little Thoreau instead of Dumas and Twain.”

Will the instances of the “On Walden Pond” merger be further perpetuated, now that I’ve brought the issue to light? I don’t know. I take the risk. The book and the movie may be forever intertwined. And that may not be a bad thing.