The country was new to me beyond Fitchburg. In Ashburnham and afterward, as we were whirled rapidly along, I noticed the woodbine (Ampelopsis quinquefolia), its leaves now changed, for the most part on dead trees, draping them like a red scarf. It was a little exciting, suggesting bloodshed, or at least a military life, like an epaulet or sash, as if it were dyed with the blood of the trees whose wounds it was inadequate to stanch. For now the bloody autumn was come, and an Indian war-fare was waged through the forest.
~ Henry David Thoreau, in the second paragraph of A Yankee in Canada

Henry Thoreau wrote these words while outlining his 1850 trip from Concord to Montreal, begun on Wednesday, September 25. He and friend Ellery Channing had ridden west along the Fitchburg Railroad to the city of Fitchburg, where they switched to the Cheshire Railroad to continue northwest to Bellows Falls, Vermont. As they passed through the town of Ashburnham, they saw woodbine – the vine we commonly call Virginia creeper – hanging in the trees. It was noticeable, since it’s one of the first plants to turn color in autumn. And what a brilliant color it becomes!

Throughout the course of summer, Virginia creeper disguises itself in shades of green, blending in with whatever vegetation surrounds it. Or, it too closely resembles ivy – English or poison – by climbing walls and trees, or by lining footpaths. In these cases, we don’t give it much thought except to count the number of leaves, and to be relieved at seeing five (Virginia creeper) instead of three (poison ivy).

But now it’s the time of the year for the big reveal. Voila! What was hiding in plain sight has now established itself as something utterly different. All of a sudden the vine turns shades of deep maroon and crimson. Now we can see the trails it has followed, as it has advanced all summer long. It has creeped across rock walls, up the sides of buildings, up utility poles and street signs, and into all kinds of trees. And it has a head start on the color wheel. It turns before its host tree does: perhaps for our benefit, so that we can locate and identify it before the rest of the leaves grow gold or red. 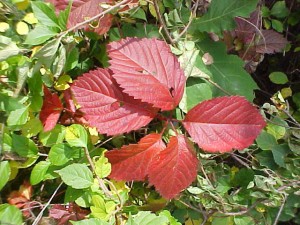 Whenever I witness this phenomenon, I’m taken back to a time in my past when I lived in another city. We moved into a house there in November of that year. The neighborhood included a fair number of trees, open spaces, and wild places. A few maples from next door shaded our yard nicely. Rose of Sharon shrubs were common, too. When spring arrived, our part of town became very green.

A few blocks away stood an assorted grouping of trees. I never took the time to figure out what species were represented here. But I always made a point to at least glance in their direction, whenever I drove past. My admiration continued well into summer. What a variety of bright and leafy green hues they had! Then September arrived, and SURPRISE! The trees suddenly donned several thick red scarves and drapes, just like in Mr. Thoreau’s description. Who would have suspected that Virginia creeper had been hiding all along within their branches? I had to go back home and get my camera. 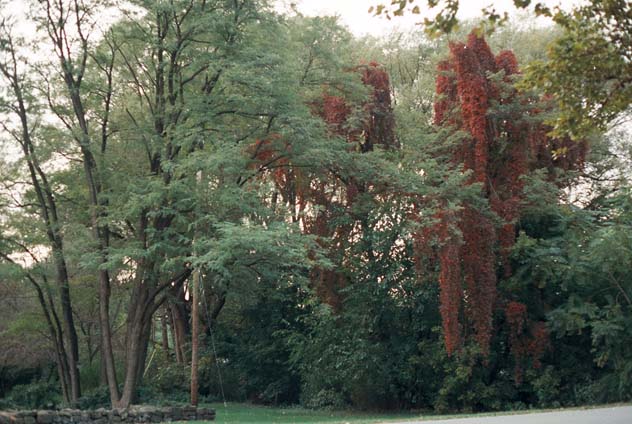 Sashes in the Trees of the Old Neighborhood

When I chatted about the new beauty of these trees to other local folks, some of them expressed concern and even dismay at the sight. They thought the Virginia creeper was going to kill the trees. They thought that someone should do something about it, and that the vine should be pulled out. But no! I insisted. It’s just Virginia creeper, now known to scientists as Parthenocissus quinquefolia. It isn’t hurtful. This is a natural occurrence that humans need not interfere with. Besides, it could remain our special secret for at least eleven months. And then we could be astonished again, whenever the next September rolled around.

I moved away from that neighborhood many years ago. I haven’t driven past those trees in a good long while. But I hope no one saw fit to touch them or the Virginia creeper; and I hope that street continues to offer surprise to passers-by at this time of year.

Comments Off on Hidden Sashes