Posted on September 28, 2013 by Sandy Stott | Comments Off on This Time Around

Note: This is a tad long, but some walks are longer than others, as are some memories. On this day (9/29) five years ago, I walked up into memory…and then down. I like to think Henry Thoreau would have approved of such a day on foot.

Perhaps the richest gift (and they are many) I’ve received from reading Thoreau’s words has been his certainty about the value of seeing the world on foot. As I’ve crossed each year’s days, I’ve tried to set aside time for the foot-won world. Five years ago, after receiving the gift of a sabbatical, I thought it was time for a longer walk. And so, as almost everyone I knew turned to the daily rounds of school, I turned uphill on the Pine Cobble Trail in Williamstown, MA, bound for New Hampshire’s White Mountains.

Part of my hope was to turn 60 in motion. That I would be walking away to come back, that, even as I climbed the slopes out of Williamstown I would be walking home, brought me into the land of paradox. I would attempt to walk both ways truly at the same time. I, like my students, sometimes groan at writers’ fondness for posing opposites of simultaneous truth, for complicating our hope of finding “the” answer. “Just tell me,” an exasperated student will say sometimes as we consider a thorny passage from Homer or Thoreau or Woolf, and I will go gnomic and quiet and smile a little…and wait for her to take the next step. So it was for me throughout the landscape of the Green-going-to-White Mountains, along a September path across ancient continents into an old world and a next life. 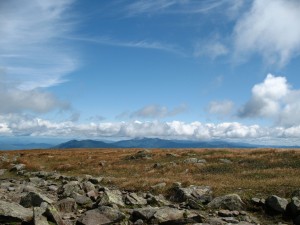 Some days later, on my 60th birthday, I awoke and looked up at the slopes of Mt Moosilauke. The first of the big climbs in the Whites, Moosilauke is also a family mountain. I had climbed it more than 50 times, in all sorts of family configurations, and, as I looked up, I knew also that my father’s ashes were on the summit, scattered there only a few years back. It also occurred to me that, though I’d climbed this mountain often, I’d only climbed from the Glencliff side once before, and that had been some 31 years back as a father-son celebration of my father’s 60th birthday. I would go up these years later along a trail of singular memory:

Between 1977 and now, brush has crowded the fields at the base of the trail, and I keep trying to align memory with what’s before me. Every so often the pictures match; then I walk over the edge into today. At the first brook I pause to filter two liters of water, and I clip their five pounds to my pack. Given the right weather, I plan to stay the night on top, which is far from water. This trail is direct as it pounds up across contours, and I know this added weight will drag at me, but a waterless camp is no camp at all, especially with the need to replenish the sweat I’m already kicking out. It’s also a rise of 3700 feet, nearly double anything I’ve trundled up in a single climb over the last 200 miles, and so I settle into a slow rhythm knowing I’ll have to sustain it all day.

The morning passes in a slow monotony of steps. I’ve expected more memory and emotion, but it is mostly thoughtless grinding. At 3500’ the trail bends left into a half-mile traverse before taking the final 1000’ vertical feet more or less head on. Along the jumbled rocks of the traverse, each step requires placement and balance and repeatedly I have to set the outriggers of my poles before edging forward. The day cools with altitude; clouds flirt with the ridge; the wind insists. On the final climb, I feel some excessive toll being collected and begin to lose patience. I’m tired of approach; I want simply to be there. The trail rises around the next bend. Then around the next.

Dogs have appeared and buoyed me throughout my life, and so I’m only mildly surprised when I hear the jingle of collar-tags behind me. Two dogs, a lab and a smaller mutt, come lightfooting it over the rocks; they sniff and greet me while I rest over my poles. I look back down for their people, but no one turns the last corner; the dogs look up at me, apparently waiting. I talk to them, ruffle their fur. For the next (the last) quarter-mile, they walk with me, one in front, the other behind; bracketed by canid spirit, I climb. There, finally, is the weathered sign atop the tilted post; there’s the old carriage road I’ve walked fifty times; there is the path of memory. The dogs disappear back downslope; then they reappear with their three people, two young men and a woman from Vermont. Standing in the cloud-filtered sunshine, we exchange pleasantries and, when they hear I’ve walked here from their state they ask if I need food. I pat my full pack and decline, and then their fourteen-footed posse pushes off upridge, and I am alone at this junction.

Memories arrive in a rush – they feature amblers of all ages and eras: my father’s engineer’s cap drips rain as he and Lucille spoon jam from a jar with their cold fingers; I note the steel-gray fringe on my father’s “brown” hair as he looks east toward Mt. Washington; my stepmother Susan leads two children left at the junction and downhill; a lithe, packless edition of me canters by, shirtless in running shoes; my cousin’s thirteen-year-old son, out in front of the family pack, stops to consider the right way down, then makes the wrong choice; my mother unharnesses her manila pack and gives me the day’s final Snickers; my brother makes a rare cameo on the heights; our dog Sherlock emerges from the close-set firs and gobbles a nameless piece of carrion; our next dog Elmo sits placidly and watches for any move toward the food-trove; before we pitch joyfully down the snow-covered trail, Lucille and I tighten the bindings on our snowshoes; a teen pulls up out of breath, looks back over his shoulder at the empty trail. I consider him.

I turn up the empty trail. I am brushing by more memories, the ways we’ve always walked, and, after a trudging morning, my mind is suddenly thick with emotion. I burst into tears. “I want to go home,” I say aloud. But really I want to go back, and in a sense, amid the jostle of selves and others, I have.

What remains is suddenly simple: the mile-walk along this old, rock-finned bridle-path; the visit to the stubble of stones and remnant walls on the summit, and then the last steps north out to the sixth cairn beyond. There, as water bleeds from the surrounding cloud, I wonder what to say to my dad. Well, there’s an offering of “Thanks” for showing me this rumpled land, for leading me up. If I must be left, if I must be alone, up here is a good place. That seems right. But not the last word. Pressed up into the belly of this cloud, I wait. “It’s all good,” I say…or someone says. The words come from elsewhere, and then, as I look up at the head-high cairn I’ve come to, I remember they are my father’s final words. It’s all good. 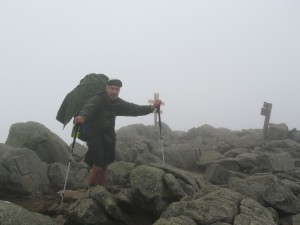 My plan to stay the night is scotched by the persistent cloud-cap. I would be soaked in 30 minutes and, in the 40-degree temperatures, hypothermic soon after. I turn to our usual path up, the Gorge Brook Trail, and set off at pace, hoping to reach its base in time to cadge a ride from a day-hiker. Lincoln lies eleven miles to the east of the trailhead, and there I can find a motel and then catch the 7:20 a.m. bus for Boston. Even with the protection of poles, my hurried descent bangs away at my bad shin – it will be a swollen sacrifice to the god of coming down. But I am clear about where I am and where I’m headed, and, when I drop below the clouds I can see a great distance.

So as I rode the bus south on September’s final day five years ago, it came clear to me that I walk and climb not to get away, but to go home—to a region of best self, land-self, upland-me, kin of rock, water-seep, pine.