Up to My Eyes in Walden

It’s not often that free time and a jewel of a day coincide. Typically, we watch a limitless blue sky and its windless, late summer light from behind the smeared glass of work. One of the most common fantasies I hear as colleagues siphon off coffee on such a morning begins like this: “I can’t wait to have a day like this off, so…” And then he or she trundles off to one of work’s rectangles.

Thursday, September 19th sets up this way: it’s cool and windless in the morning; the humidity is low and the trees and river look sharp edged in the clear, slanting light. I wonder, wonder I do – what’s my day looks like once my late-morning class is through? A few reshuffled appointments and a pile of abandoned papers later the afternoon looks as clear as that slat of sky between the high pines.

And so, a little after noon, I step between two trees onto the Wright Forest trails behind Walden Pond with an eye on a long ramble whose route I’ll make up as I go. A quarter of an hour in, I reach the unmarked turn-off for the old race course whose crooked oval persists these hundred-plus years after the amusement park on Walden’s west end faded. I decide to canter a circuit of the old course, where I am the slowest horse; still, I am also the only horse, and so I finish first. My prize is more trail-time.

I’m soon at the pond, where I amble along its north shore and climb over its uptics before easing through the growing congestion on the east-beach side. A few school-groups note the pond dutifully in journals, while their tech-addicted peers hide from teacher-eyes in the shadows and expect from their screens. An assortment of other refugees from work and other obligations loll pondside. Almost everyone is looking out over the water. Along the old esker that leads me away, I see flashes of pond through the trees, and then I reach the slope leading up to Emerson’s Cliff, a small crag at suitable remove from the nearby bustle.

As ever, no one’s here, but a breeze stirs and the air is cooler atop this mini-mountain. Down its rocky backside, the trail enters an absent world; the worn track says others walk here, but I’ve never seen anyone. How quickly we leave a crowd behind when we deviate from the usual rounds. I near the beaver lodge in the swampy dell below the railroad tracks and see the old gnawed trees tipped into the water. Then, across the tracks again and into the big pines of Lincoln. “Why not,” a wandering voice asks, “visit Misery?”

Ten minutes bring me to the left to Mt. Misery. Misery’s backstory has eluded me, but the name seems inapt, even inept, for such a fine cone of stone in big woods.

I’m retracing part of my route and sweat rolls from my running; “the pond, repeat after me, the pond,” says some interior voice, and I repeat, “the pond.” Fifteen minutes later I’ve reached a sliver of beach on the southwest shore. The water level is low, but, as ever, the greeny water is clear, even after a summer of sloshing by the lotion-slathered leviathan that is Walden’s daily beach crowd. What resistant purity. Shoes off, shirt too. Step, step, step, plunge – pale critter submerging. I swim a few strokes, let my feet fall and note that the drop-off is already over my head. My toes tread in water five degrees cooler than the surface. Belly to the sky, I float and let the land’s heat and the step step of minutes wash away. 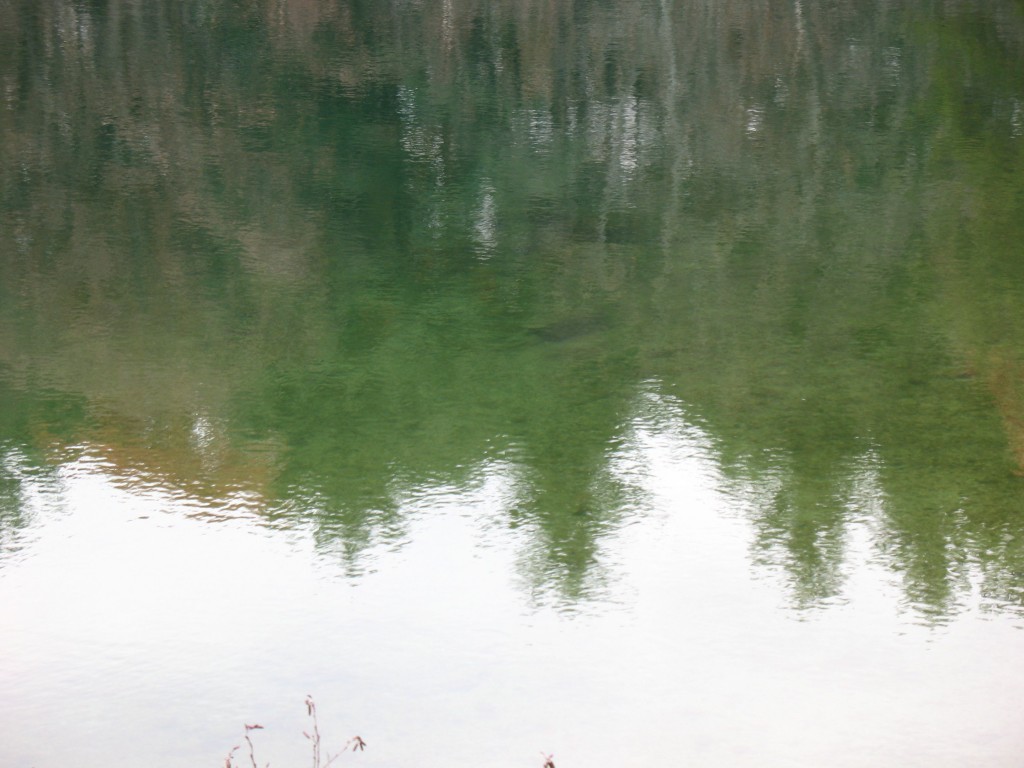 Some time later, I am in four feet of water with my eyes a few inches above the skin of the surface. Across from me is Thoreau’s Cove, its guardian sandbar speckled with waders; distant kayaks glide forward like swans; the pines point to the sky, which looks immense. A rogue duck disturbs this reverie, paddling a few feet from my nose. Perhaps I look like a pale stone with a token scrap of  moss on top. The duck pays me no notice. Instead, he is avid for something on the unrippled surface; he keeps stabbing his bill right and left, paddling back and forth in front of me. Am I being taunted? I begin to wonder. Perhaps this is simply a quest for some duck-truth. I look more closely and see finally that he is hoovering up tiny flies from the surface. This warm day has called up a new hatch, I suppose, and those that break the surface-tension are mired in the water. Perfect picking for my duck. A tiny fly drops lightly onto the water an inch before me and doesn’t dent the water; he lifts off again. The duck gathers his less light-footed brethren.

As I’ve watched, the water-envelope around me has warmed. I stir, and a little cool brushes me. In my crouched stance, in my clear water with its skin stretching out and out, I am effortlessly calm. The day seems paused. Soon, I’ll emerge, drip dry, towel sand from my feet with my shirt and put on my shoes for the Fairhaven trail back to my car. I will find that I’ve been out for the Thoreau-approved four hours.

But for now, let’s leave me here duck lucky and up to my eyes in Walden.

Note: for a superb history of the pond see Walden Pond – a History by Barksdale Maynard.

This entry was posted in Arts, General, Living Deliberately, Nature, The Roost, Walden. Bookmark the permalink.

One response to “Up to My Eyes in Walden”