“I perceive that scent from the young sweet-fern shoots and withered blossoms which made the first settlers of Concord to faint on their journey.” (Thoreau’s Journal, June 11, 1856)

I can’t help myself. Each time I walk along the northern shore of Walden Pond, I have to reach out and squeeze a sweet-fern leaf. Then I hold my fingers to my nose and take a deep breath. What an amazing aroma!

During recent walks at Walden Pond and along the trails behind Thoreau Farm, I introduced fellow hikers to this habit. It bothers me that many folks sail right past this plant without giving it a chance to introduce itself. 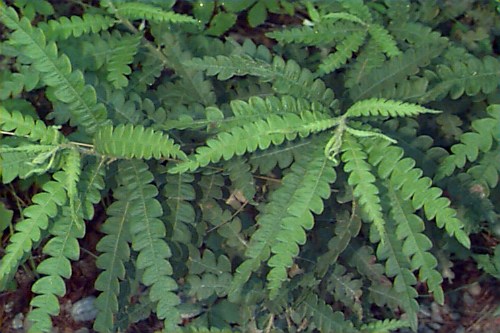 Here are some facts. Sweet-fern isn’t a fern; it’s a shrub. Its scientific name is Comptonia peregrine, and it belongs to the bayberry family. If Thoreau scholar and botanist Ed Schofield were still here to expound upon this plant at length, he would tell you that sweet-fern is one of the few species that is able to “fix nitrogen.” This means – if I understand the science correctly — that it can take nitrogen from the air and redirect it into the surrounding soil, thus improving the quality of nutrients in the immediate landscape. But sweet-fern needs to partner with a specific kind of bacteria to do this. Ed would gleefully dig up a small sample to show you the nodules of the fungus that grows among the roots of the sweet-fern. It’s a mutually beneficial relationship. And this complex biology proceeds invisibly in the woods behind Thoreau Farm and also at Walden Pond, where hundreds of humans stroll past patches of sweet-fern daily.

I always got the impression from Ed that its heady bouquet was related to its nitrogen-fixing capability. But no print or online authorities I’ve located make this claim. I have learned that the Native Americans used the crushed leaves to relieve the itch of poison ivy, and that drinking sweet-fern tea could resolve a variety of medical maladies, from toothache to diarrhea. I’m not sure I want to dabble with these remedies any time soon. Getting a good whiff is enough for me.

What of its effect on early settlers that Thoreau spoke about? He must have gotten this story from reading Edward Johnson’s book, A History of New-England (also known as Wonder-Working Providence of Son’s Savior in New England), published in London in 1654: it was a book that Thoreau checked out of the Harvard library 200 years later. Johnson painted a scene of the early pilgrims walking from Boston to Concord in 1636, struggling across a land full of “ragged bushes.” The day was so hot that it resulted in “such a reflecting heate from the sweet ferne, whose scent is very strong, that some herewith have beene very nere fainting, although very able bodies to undergoe much travel.”

Well, I don’t think the sweet fern scent’s THAT strong. None of our hardy New Englanders or even out-of-town visitors have keeled over in recent days because of it.

On March 18, 1860, Thoreau noted in his journal: “The sweet-fern grows in large, dense, more or less rounded or oval patches in dry land. You will see three or four such patches in a single old field. It is now quite perfect in my old bean-field.” He was referring to his former garden at Walden Pond, of course. Now we know that sweet-fern grows best “in dry infertile soils” (according to www.bostonnatural.org) and “is among the first to colonize barren, nutrient-poor soils” (says gobotany.newenglandwild.org); this realization could explain why Henry chose not to plant a garden during his second year at Walden. The earth didn’t WANT to say beans. It was ready instead to sprout sweet-fern and oaks.

Nevertheless, and putting all science aside: The heady scent of sweet-fern is one that everyone should experience. Go out and find some and squeeze a leaf for yourself. Or stop by Thoreau Farm some day, and we’ll go walking. Let me know what you think.

5 responses to “The Sweet-Fern Squeeze”