Note: This piece flows from thought about Thoreau’s time on Katahdin, and it is a little lengthy for a post. But sometimes – when you’re traveling into Maine’s interior or pointing out into its seas – it takes that time to get out there.

Let’s begin with a detail in that minutiae often determine a trip’s arc: there’s no “e” on “haut” to match the masculine “jour” of this day, and it’s good to begin any journey with correct alignment. That seems especially true when one is traveling to Maine’s Isle au Haut and its southern (seaward) end, because this isle is a place apart, the kind of place Shakespeare may have had in mind when he conjured the deep magic of his final play, The Tempest. To get there you have to cross over. And so we should have our purpose and paddles well lined up as we leave for this island whose rippled back already determines the skyline to our south.

There is nary a breeze when we set out in our narrow boats at 6:30 with the July sun already risen 20 degrees from horizon’s birth. The water is glassy flat, and only the constant thrum of lobster boats working from trap to trap stirs the morning. The tide turned some 90 minutes ago, and so with each stroke we are also riding its broad back as it eases seaward. Such a big, effortless being, always in motion. As happens on those rare mornings when I do rise very early, I look around and say, “I should do this more often.” Of course I should, but it’s also good that this is a singular day; the early hour and aligned tide signal a chance to try this circumnavigation I’ve aimed at for years.

Isle au Haut lies six miles off the southern tip of Deer Isle, itself a sort of Rorschach blot of an island midway along the Maine coast; beyond Haut (pronounced Ho by Mainers) there is an emptiness of ocean whose end can only be imagined by resorting to large-scale charts. For those of us who like to travel in thin, hand-powered boats shaped like compass needles, the sea that washes onto Isle au Haut’s southern shore is “big water.” And so, even given today’s benign forecast of flat seas, there’s an amperage of anxiety loose in our systems as we point toward this water; it is where the big fish swim and most little boats don’t go.

Paddling’s repetition defuses most of that current as we settle into passage among the many islands and islets on the way to Haut. Cadence summons memory, and I think back to a solitary paddle four years ago, when I first believed that a one-day rounding of Haut was possible. It was another still summer morning when I slipped from the inner harbor by a rental cottage seaward and began an isle-skipping that brought me to the aptly named Enchanted Island, with its small white-shell beach sheltered by two arms of stone. From Enchanted I looked seaward and saw only the low phantasm of Fog Island and huge finny bulk of Haut, and minutes later I shoved off on the three-mile crossing to Fog all the while approaching too the northern end of Haut. Some hours later I was four miles along Haut’s six-mile eastern shore and wondering what lay beyond. But the tide had turned and was running at a knot against me, and an emptiness had spread across the water and day before me; I was emphatically alone, and it seemed that paddling on would be leaving the day and myself behind. I turned and the tide carried me back into this world. Still, by day’s end I had clocked nearly 25 sea-miles, and a round-the-Haut day asked for just that number.

It’s still early when we paddle by the quiet village on Haut’s north end. Its lawns are trimmed and its wide summer porches empty. A lot near the town dock has a dozen pick-up trucks in two rows, their engine-blocks long cooled from the 5:00 a.m. departures of the Isle’s lobsterfolk (the village’s most famous fisher is Linda Greenlaw, swordboat captain of Perfect Storm renown). None of the 73 year-round Isle-landers is evident, nor are the summerfolk who double the population for a few months.

Today, I’m paddling with my friend Geoff, and, as we pass the iconic lighthouse south of town, we leave usual waters. It is good to be here with Geoff, both for the ease we feel together and because he is prepared. I glance over the fifty yards that separate us and watch the easy cadence of his Greenland “stick” as he slides forward. Geoff is contemplative, his head tilted a bit toward the sky, and that seems right – he is, after all, a therapist, whose life’s work is helping people contemplate where and who they are. And with a glance, Geoff can tell you exactly where we are and the speed with which we keep arriving there. His GPS links him to satellites, and the radio he carries can join him to the whole network of seekers who go looking for the lost. Geoff is also fully geared and amply practiced in handling both boat and self. And last year, he surprised himself when he turned an exploratory paddle into a solo rounding of the Isle, a complete circuit that he said traversed an eeriness he’d not felt before along the southern end. For eleven miles that day he saw no other boat.

I’m less equipped and less practiced, though, given the calm conditions and a good level of fitness and ability, not over my head either. Still, I am happy to look over and see my friend, an other-rigger of competence, as my boat slices into this new and colder water.

There is a point in any adventure when you cross a line. For some time, you are getting there getting there, and then, you are elsewhere; the world has turned beyond usual. Today, that happens when we pass Duck Harbor, a little indentation along the west side where the National Park maintains a summer ranger station and small encampment. Duck Harbor has a pier, and once each morning the Isle’s mailboat arrives (we are an hour ahead of it) to drop campers and walkers; it returns at 4:00 to retrieve day-walkers. It is the last outpost before five miles of uninhabited coast.

But even before this evident line, there are markers of another world, one where water supplants terra-firma stone as the dominant force. Just beyond the aptly named Trial Point we pull into a steep, cobbled beach for a rest stop. Both the beach’s steep slant and its rounded stones are water’s work, and, even without much swell, landing is trickier than a simple running-ashore on flat sand. It takes little to imagine serried waves pounding this shoreline, rolling these million stones up-beach and then raking them back down with a rattling sound like so many dice, wearing them into round compliance. Anything the water can reach, it modifies. Like this once-pine that is now a bleached, skeletal sculpture of wood at the top of the beach. Its bark has been beaten away, its root system is a pale, soiless tangle. We look out over the day’s flat sea; even when calm, it is suffused with power. Some day this isle will not be haut. 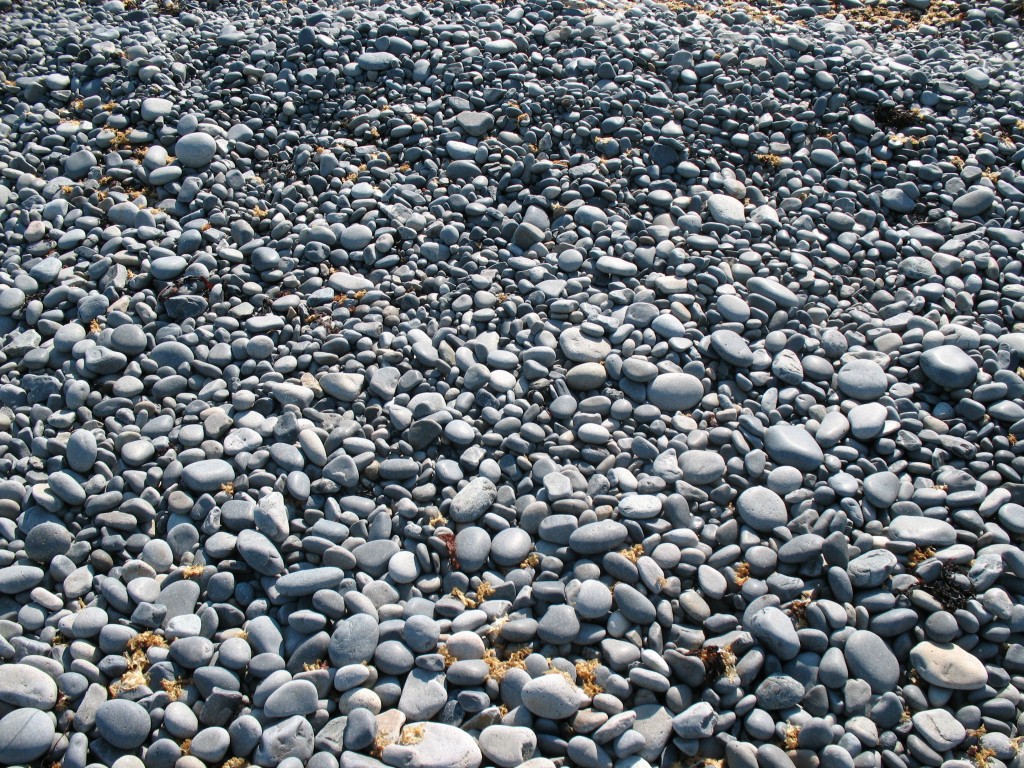 Some of the Million Round Stones

Beyond Duck Harbor the coast is dotted with “rock gardens,” those constellations of ledges that appear and vanish with the tides. There is the premonitory sound of today’s little sea meeting these rocks, the wash and suck of its breathing that stirs the hair on my neck; even a modest sea would be a turmoil of wave and currents. Today, however, I can ease through small passages and, with a feeling akin to patting a whale, I can sidle right up to these leviathan rocks. It’s slightly eerie fun.

Haut has two detached promontories on its ocean-end; the first is Western Ear, and the next, predictably, is its eastern cousin. Here, upthrust ledges fifty feet high make their stand, and they are fringed with a penumbra of pine. The whole effect feels like a huge stone eye watching you. Whatever geological upheaval helped form Haut also turned these ledges on end so that floating off them is also akin to viewing the volumes of some giant’s library. Here too the scent of the sea is stronger with a cold fishiness that says, deep deep water’s not far off. I feel cast back into some elemental moment before human narrative began to layer and soften the land. Whatever appears will be outsized, I think. It is the sort of “contact” that Henry Thoreau felt and wrote about when he climbed Katahdin. 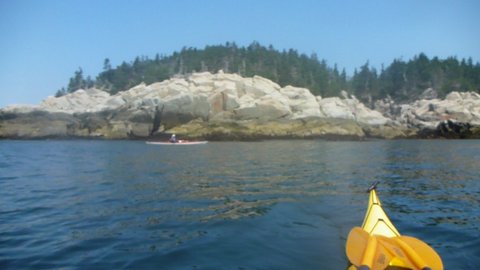 The Ocean End of Eastern Ear

As often happens, nothing appears, at least overtly, but as we paddle along this absent south shore, its hundred-foot cliffs and occasional cobble pockets form an otherscape that makes us too feel new. All the daily layerings of life feel peeled back – fresh eyes, and, even in the cold rising from the water, fresh skin.

Western Ear feels and is the day’s more remote point, its emotional Haut-point too. Then, somewhere between the Ears, the day tips into its second half: it is evident that the calm weather will hold; the cliffs dwindle; a boat appears; we near the turn for home; first fatigue enters our shoulders. We are on our way back. 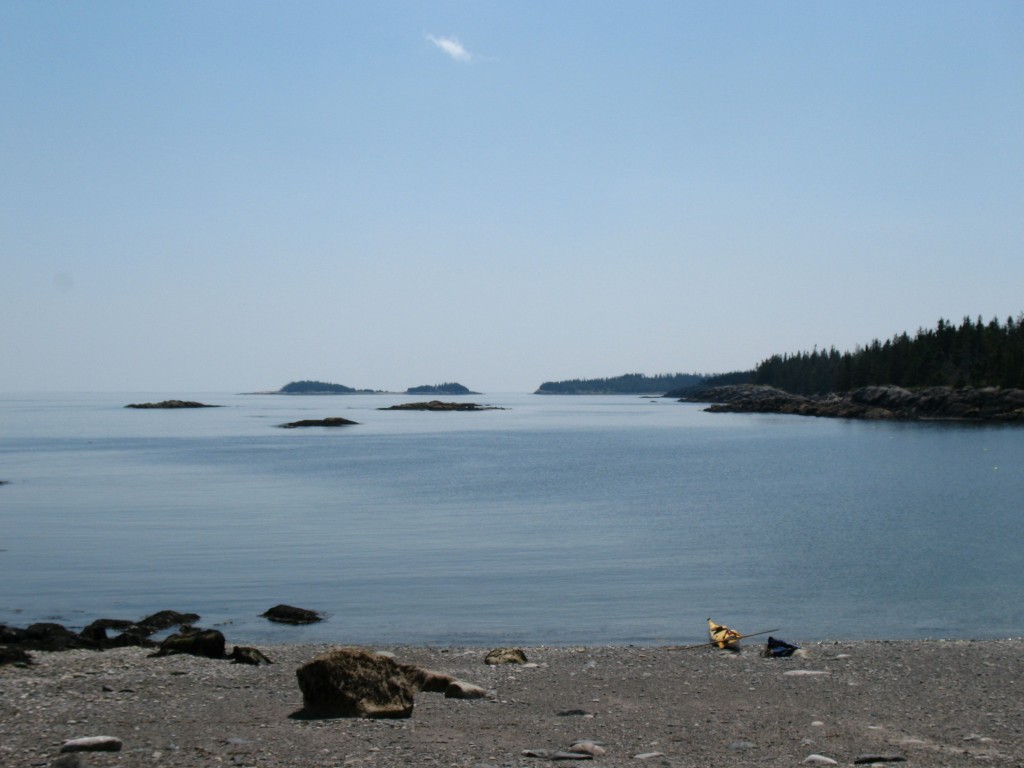 End note: Our return is also a paddle through beauty, though it settles into a usual beauty. And there are the small creaks of our bodies’ complaints from this long, seated day of pressing paddles through water, its thousands of strokes two lines alongside us always. We paddle, we land; we quaff water, eat a bit; we paddle again. Near 5:00 p.m. and back at our launch point, we find that we have been 24.88 miles. We divert for a few hundred yards and make it just over 25.

Comments Off on Haut Jour