After the Eagles – Crossing Over Climbing Up

By the time I push off from Lookout Point, the forecast winds are already hurrying across the bay, and the water’s roughed to a sharp chop. I get two washovers (waves that sluice over the whole boat) in the first hundred yards and they bring both a frisson of excitement and the realization that this first mile is going to be work. But once across it, I can see that I’ll gain the wind-shadow of Birch Island, and, after easing along its mile length, I’ll have only a short crossing to Little Iron and the nest I’ve been visiting since April.

So I set to work on crossing over.

Confession: “work” is the wrong word for the slow pleasure of riding this live water. Twenty minutes later, I arrive at Birch, salt-flecked and smiling. Yes, I can do this sort of “work.”

The wind wraps around the south end of Birch and presses its hand to my back as I ease north along the shore; the tide is also with me – today, life is aligned amid these islands.

Even from a quarter-mile away I can see the nest’s dark bulk, but as I draw near I can sense also its emptiness. No totem bird sits atop the host oak; no dark wings cross the sky; it feels the way your room did when you left home for school or to marry. 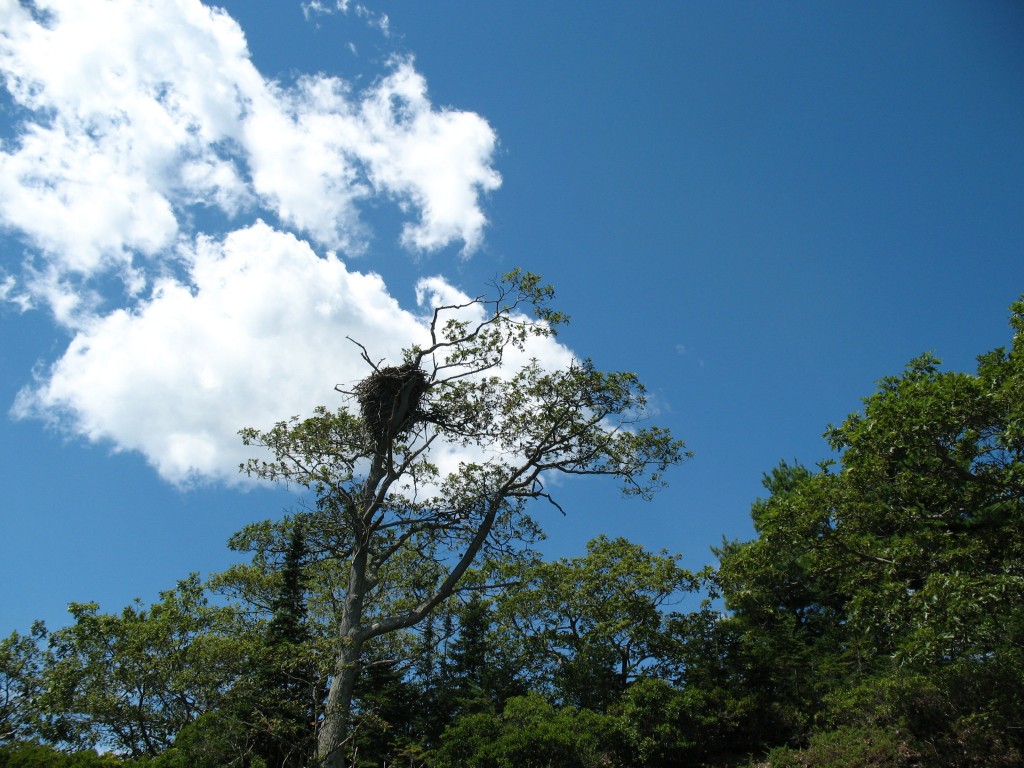 For months, I have approached slowly, sensing for and keeping to some perimeter of eagle comfort. Across these yards I have watched the eagle parent on duty as he or she has watched me, and, since late May, I’ve watched also the periscope of the eaglet’s head as it swiveled first this way, then that, waiting for the next meal. In June, I first heard a mewling sort of complaint and figured it was the eaglet learning the skill of tantrum. But closer attention said it was the parent, who, perhaps, was learning the truth of exhaustion – hungry, he is always hungry, she may have been thinking; I’ve barely slept since the hatch.

In July the mewling became keening, and now it came from the nest. “More,” it seemed to say, “When is more?” The parents sat stoically on either side waiting. “Time to get your own,” they seemed to say. In the nest a small ruckus and a stick flew up and out, bounced once on the ledge and splashed into the water; the head reappeared. “More now?” it seemed to say. “No more” was the answer. The eaglet hopped to a branch, flapped in demonstration once. Fledging couldn’t be far away. 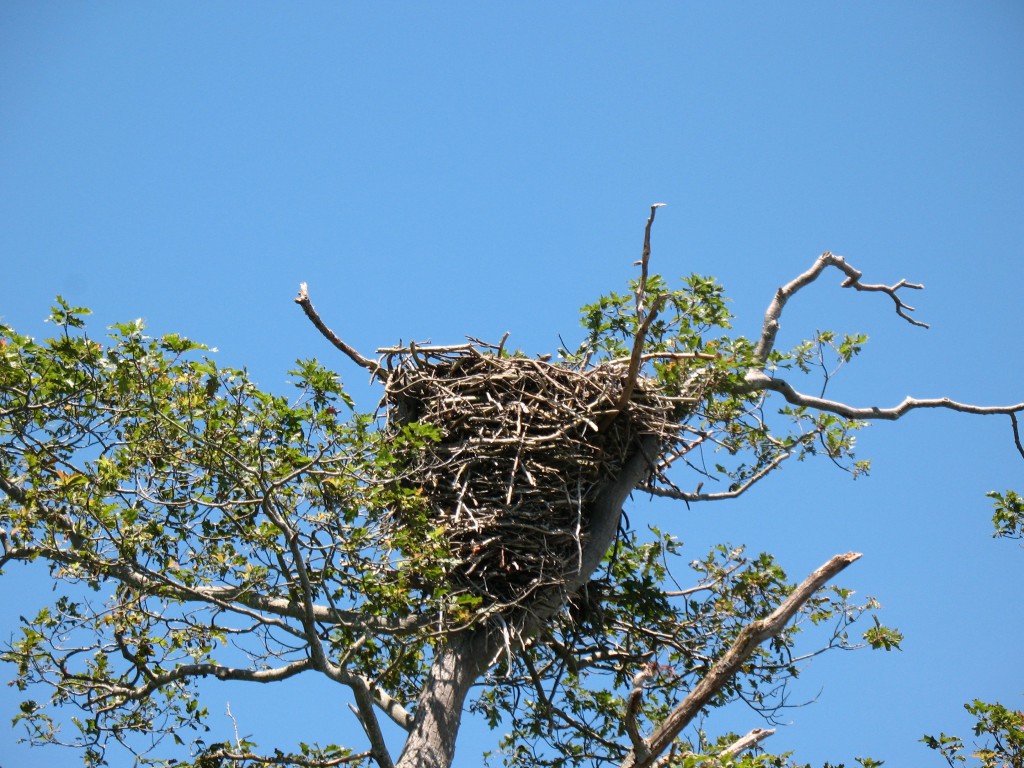 Today, I go ashore on the iron-rusted, orange rocks and grab bayberry bushes to haul myself up the fifteen feet to the narrow ridgeback of the island. Beneath the nest there’s a litter of discarded or failed sticks as thick as my thumb. Amid the litter there’s a rodent skull – unlucky weasel? – and some tufts of duck feathering. The oak lists a bit seaward with its hundreds of pounds of first-year nest, but they seem securely matched, tree and nest. I shinny and stretch to reach a first branch and haul myself aloft – ponderously, precariously. I climb up under the woody bulk and look out across the bay. I am no eagle, but for a moment I can see like one.

2 responses to “After the Eagles – Crossing Over Climbing Up”