How many a man has dated a new era in his life from the reading of a
book.  The book exists for us perchance which will explain our
miracles and reveal new ones. (Thoreau, “Reading,” Walden)

When we marked the 159th anniversary of the publication of Walden; or, Life in the Woods on August 9, 2013, I was returned to the story of my own first copy of the book.

I suppose I became an unofficial “Thoreauvian” after reading the essay “Civil Disobedience” in Harold Sachwald’s tenth-grade English class at Hempfield High School in Lancaster County, Pennsylvania. It was in the early 1970s. I was an only child who felt that she was under the daily scrutiny of a domineering mother. Thoreau’s spirit of independence and inclination toward non-violent protest immediately resonated with me. “The only obligation which I have a right to assume, is to do at any time what I think right,” Henry told me. Wow. I sure wanted to drink more water from this well.

Walden was the book I knew I had to read next. So I checked out the copy from our school library. It was several inches thick, had a leather spine, and was probably from the 1930s or 1940s. It had a leafy decoration on the cover and a few nice engravings that illustrated each chapter. But I couldn’t quite get into it. The opening section on “Economy” had me stymied. But I still sensed that the contents would be important to me, so I kept renewing it and kept hoping that I would someday understand it. I carried that book around for most of my junior year. Finally, I returned it to the library, heavily fingerprinted, but unread.

In the second semester of twelfth grade, I took an elective American literature class that included the reading of Walden. For no recorded grade and for only half of one academic credit. I bought my own paperback — ironically enough, at Walden Books in the Park City Mall — so that I would be free to underline the good parts. I even liked the way this edition looked, with its funky and colorful 1960s cover showing a solitary individual, sitting under a tree, gazing across a body of water. I paid 75 cents for it. I wanted to be that person. 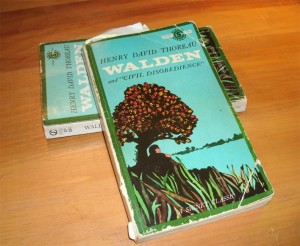 MY Walden and one of its sisters

I’ll admit that it took the intervention of English teacher Thomas McVey for me to finally begin to digest Thoreau’s prose. But suddenly nearly every page contained at least one nugget that I felt was inspirational and worth saving: “The mass of men lead lives of quiet desperation,” for instance; “I went to the woods because I wished to live deliberately,” for another. I underlined them all with my see-through, blue Bic pen. These were powerful words for a teenager, especially for one who was on the verge of carving out her own place in society. I took the philosophy of Walden to heart. I was hooked on Henry for life.

Many years have passed. (Just how many and where they have gone, I cannot fathom.) I now own at least half a dozen copies of Walden; including a German edition I bought in Munich in 1986 and a Canadian reprint that I picked up in Ontario in 2009. But whenever I need to find a favorite passage, I turn to my well-worn paperback. I open it up and smile at my youthful wavering blue underlines. And I find just what I was looking for.

At used book sales, I have sometimes spied sister copies of this edition, MY edition, with the person sitting under the autumn-leafed tree on the cover. I used to buy them as I saw them so that I could have multiple copies of MY Walden. Recently, I changed my mind. I now leave the books behind so that someone else can find them. I hope that their new owners will be as inspired by Thoreau’s words and THEIR editions as I have been.

4 responses to “MY Walden”