Posted on August 20, 2013 by Sandy Stott | Comments Off on Birds and Berries

When we intuited that, at some point, Maine might become home, we planted two high-bush blueberries in our backyard, and, from the front, where it was shaded by white pines, we transplanted another. This triptych of bushes has thrived in their sun-spot, and they have begun to grow together into a backyard thicket. Early this summer, a catbird claimed that thicket (and the whole yard, it seemed); whenever I sensed a flicker of motion as I sat at the breakfast table, it was two-toned, gray and charcoal.

And just as I hovered around these bushes, flicking Japanese beetles from their leaves, so too, as the berries fattened, did the birds. The catbird maintained her seat; she was still bird-of-the-yard. But the timid doves also arrived, and the sparrows and finches, and the titmice, robins and our paired cardinals. Most insisted on fresh too, passing over the already pecked or beetle-gnawed berries that littered the ground for the green and half-green ones on the bush.

Recently, the berries have ripened in a rush, and in the morning the patch has been an aviary; it seems that the catbirds have lost control and every robin and his cousin are here; so too the jays. And, from the woods out back, a wood thrush now flies in, unusual sighting in this edgeland. And – flash of color – a goldfinch? The berries are bigger than his stomach; no way he can lug one off and swallow it. But there in a burst of yellow he goes, the half-ripe berry like a bulbous nose on his beak. 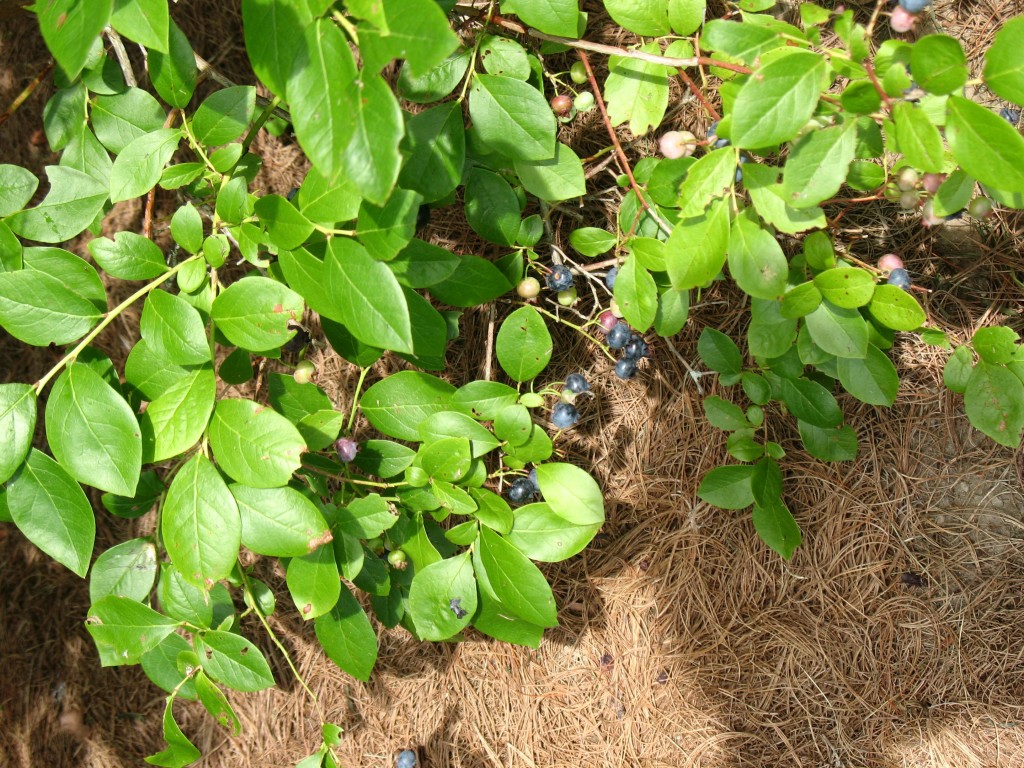 Years ago I asked at the hardware store about this “sharing” with birds and was advised to get netting to drape over the bushes. Dutifully, I bought some and set up protection for “my” berries. An hour later I happened to look out and see movement behind the bushes; when I checked I found a robin partially wrapped and flightless in the netting. “O, no,” I said aloud; the robin was panicked and immobile. I went to find my wife and some scissors. Gently, she cupped and held the robin, who struggled and then went quiet, and gently I began to snip the strands of netting. It took 5 minutes to undo the misappropriation and confusion. But when my wife opened her hands, the robin flew to a nearby tree where he paused and looked back as us. Then, he was gone. We took off the remaining netting and tossed it. And so it was set: each August morning I was to watch this show in the bushes.

Over the past week, the redbird has become ascendant. Not that our resident cardinals have chased away the robins and sparrows and jays that come to dine a la bleu, but they are always within eyeshot. Today, the red streak arrowed across the yard, put on his airbrakes and settled in on a branch as I sipped coffee. Why, I wondered, does he want that green berry, which, given a still-tight bond with its branch, keeps resisting? The blue ones – and they are many – are ripe and pliant, ready to drop; they are also sweet. But it had to be the green, and, after some flurried hovering and tugging, it was. Off he flew to the bank of rhododendrons with his green prize.

All these bird aeronautics have attuned my eye to movement, and tapped into my fondness for the peripheral. Later in the morning, while I was supposedly focused on some dense reading about Romanticism, red wings drew my eye again. But what I was saw wasn’t usual: the redbird, for a change, wasn’t in the berry bushes. Instead he was on the ground beneath the bedroom window; as I watched he flew straight up and hovered, appearing to peer into the room. Then he settled back to the ground. New genus, peeping redbird? I wondered. He did it again, and then again. Now I was watching closely, and I realized that he was plucking spiders’ egg-cases from just under the sill of the window, and those cases were the size of berries. Perhaps he only practices with the green berries.

Minutes later, however, he was back at the bushes. And always, on the periphery of vision drawn to his flashy red is his mate, her dun coloring tinged with a yellowy orange; she brings her romance and gets her berries too.

And each afternoon, after all the avian feeding, I go out and get ours.