“There’s a ripple effect in all we do –
What you do, touches me;
What I do, touches you.” (author unknown)

No, this isn’t a quote from Henry David Thoreau. This anonymous poem is printed on a 25-year-old poster that’s tacked up on a wall in my office. In the background, an ocean sparkles in moonlight, and small waves tumble toward the viewer. The words still ring true for me, perhaps now more than ever. 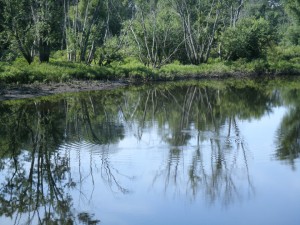 Recently, I spent a few minutes standing in one of my favorite places: on the slight crest of the North Bridge in Concord. To me, the fact that the American Revolutionary War began with shots fired here is ironic to the point of being ridiculous. That one of the most serene spots on the planet could have had such a violent intrusion thrust upon it, and that the event is still memorable enough to be re-enacted at regular intervals today – well, that’s a discussion for another time.

The Concord River passes oh so slowly under the bridge at this time of year. Random bits of floating leaves and twigs are the only clues that point to its sluggish pace. If no noisy visitors are walking around, chatting, or clicking their cameras, the solemn river itself sets the rhythm and the volume of the day. Left alone, it languishes in near-silence.

I was basking in this peacefulness when PLOP! A fish broke the surface and then just as quickly, dove out of sight. I watched as the ripples rolled out from the site of its outburst. Rims of perfect circles reached upstream and downstream and toward both riverbanks — without fanfare, without hullabaloo, without making any sound at all. The swaying water displaced a leaf or two, and perhaps carried swimming insects and small water creatures an inch in another direction. From where I stood, it didn’t look as if the fish had affected anything. But how could I know, being a mere human, standing on a tall wooden bridge, and not being a resident of the complex water world flowing beneath me?

As I was lost in such contemplation and was reminded of the poster back in my office, PLOP! The same fish – or another one – popped up near the first spot and disappeared. And a fresh set of mini-waves spread across the surface of the river – a visualization of 360 degrees expanding exponentially, stretching away from the source, until the wider rings were finally stopped by the solid earthen shore. It was magic to watch.

We never know what actions or words of ours may influence or inspire others.

I wasn’t physically touched by the leaps of the fish. But I was impressed enough to want to write about what I had witnessed. And now that I have written this piece, I will PLOP! it into the online universe, where its ripples will emanate electronically. If the past predicts, a few hundred folks will see the link. A few dozen may actually click on it. Some will read it. One or two readers may add comments in return. My words may always exist in the realm of the Ethernet, but they will quickly fade from the surface, from immediate view. They may re-emerge only when someone has fished deliberately for them. They probably will not create radical change.

But let’s think of Henry! Consider how many individuals have been inspired by reading Henry Thoreau’s words. Someone who did not gain fame in his lifetime has earned a great deal of it in the century and a half since he walked through this very town. How many millions have read his philosophies, across the decades and around the globe? How many of them have chosen to live deliberately because they believed that Henry challenged them to do so?

We think of the more famous folks first: Mahatma Gandhi, Martin Luther King Jr., Emma Goldman, John Muir, N.C. Wyeth, Charles Ives, Jack Kerouac, Michael Pollan. The lives of these individuals are celebrated on a wall of tribute in the house where Thoreau was born. But they represent just a small sample of the people who read Walden or “Civil Disobedience” or even a special saying on a poster or greeting card. For these readers and for many more, the splash of Henry’s words has been enough to jostle them into thought and introspection. And afterward, into action.

The writings of Henry David Thoreau first fell quietly into our literary stream. But ever since, they have sent out ripples – ones that continue to reach new readers today, on every part of the planet. And many folks in turn will somehow react and respond. And their activities will help to keep the waves moving, ever outward, in all directions.

3 responses to “The Ripple Effect”