Days of the Locusts

Posted on June 5, 2013 by Sandy Stott | Comments Off on Days of the Locusts

“When you hear him, you have got to the end of the alphabet and may imagine the &.” (Thoreau, Journal September 1, 1856)

Word of the upcoming 17-year cicada siege recently hit the front page of our local newspaper. When my octogenarian father saw the headline that morning, he scoffed over the breakfast table.

“Well, maybe some people don’t know about them,” I countered. “Especially with our growing immigrant population, or with people having lived all of their lives in cities.”

“I suppose,” he allowed, as he filled his bowl with cereal. But I could see that his internal wheels were turning, and that the past would soon be called upon.

“I remember back home, when I was playing outside, I used to find locust casings all the time,” he said.

I nodded. That was at my grandparents’ small farm outside of Allentown, Pennsylvania, where I myself often spent a week or two during summer vacations in the 1960s and early 1970s. And like most folks, my father and I both call cicadas “locusts,” even though entomologists see them as separate species.

“I used to find them in the side yard there too, on that little tree,” I said. I could still picture one of those paper-thin and lifeless shells grasping the bark with sharp but ghostly claws.

“Halfway up the trunk,” he said. 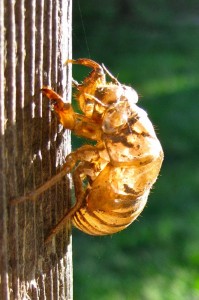 In the moment of silence that followed, I considered it a pretty nifty fact that my father and I had shared similar experiences as solitary kids in that same spot, even though the instances themselves had come many decades apart. And this was a topic we’d certainly never talked about before.

“I used to watch them shed those skins, too,” he continued, as he crunched his shredded wheat.

“Wow, I never saw that. How long did that take?” I asked.

“Wow. But they end up being much bigger than those shells are. I’ve seen photos. How does that work?”

“I don’t know, but yeah, they come out twice as big. One of Nature’s miracles, I guess.” He finished eating and walked over to put the bowl and the spoon in the sink.

This morning was turning out to be one of small revelation, both about the locusts and about my father. I was happy we’d finally had this conversation.

Curious about what Henry Thoreau may have written about locusts, I then did a little cruising through his journal. It wasn’t until the fall of the year that he addressed their appearance. And as he was often apt to do, Thoreau tried to figure out a way in words of describing that unique cicada sound:

It is an early September afternoon, melting warm and sunny; the thousands of grasshoppers leaping before you reflect gleams of light; a little distance off the field is yellowed with a Xerxean army of Solidago nemoralis [gray goldenrod] between me and the sun; the earth-song of the cricket comes up through all; and ever and anon the hot z-ing of the locust is heard. (September 7, 1858)

The shrilling of the alder locust is the solder that welds these autumn days together. All bushes (arbusta) resound with their song, and you wade up to your ears in it. Methinks the burden of their song is the countless harvests of the year, — berries, grains, and other fruits. (August 26, 1860)

I’m looking forward to hearing that buzzing again. It’s always the background soundtrack for late summer, when everything is hot and crisp, and when greens are well on their way to becoming browns.

Let the cicadas come! My father and I won’t mind. We’ve got some sizable trees in this backyard. Maybe this time, we’ll have a chance to witness the skin-shedding together. Halfway up the trunk.