It’s the season when moose are on the move, and, though I’ve yet to have a spring moose-meeting, it’s also the season when, as the woods thicken with leaves, I savor past meetings. Here’s one from few years ago in southern Vermont. 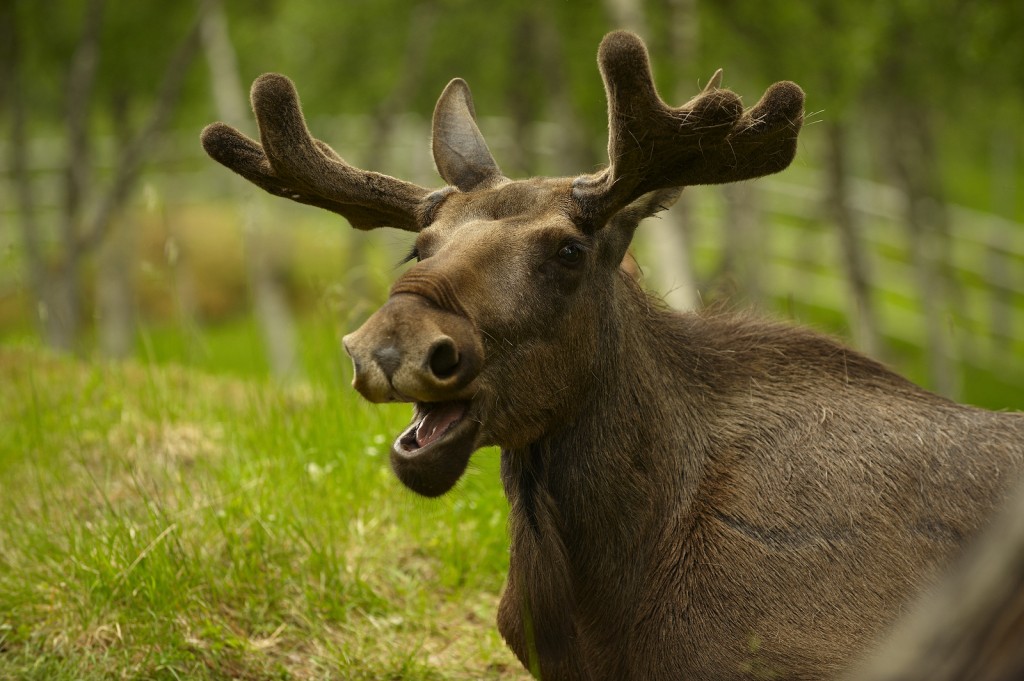 I’ve studied the map’s contours and know that I have a modest ascent of some 600 vertical feet to begin this day. I like climbing as a starter — it suggests a steadiness that can become automatic, the sort of walking where my Limmer boots kick out the cadence and I can watch the trail and nearby terrain rise and then slide away. The uphill work brings the outrush of breath that is as close as I come to making music. It is, of course, a monotonous music; it continues the way a steam-engine chuffs as the wheels turn and turn. But I also find my breathing aligning with remembered soundtracks; a few of these hover just behind my measured breaths — today, and for this walk’s duration, it’s the old (The Band, especially their song, “The Weight”) and the relatively new (Jack Johnson and his jaunty, though dark, ruminations about “your shadow”, which “walks faster than you”). My “music” becomes the measure of my walking; it is the sound of miles passing under my feet.

I am many bars of song into the morning and nearing the top of a nameless elevation, peak 3025, when something makes me glance up. There, ten uninterrupted feet away is a moose; I could touch him if I reached with the pole in my right hand. I say “him” because as we exchange a first long look, I note his rack of antlers. They are symmetrical and two pronged; they even look a little silly on his large, elongated head, like a tiny tiara. I say, breaking the silence between us, “You are new to all this, aren’t you?” The moose regards me without expression; he stays put. “Well, Mr. Moose, what are we to do next?” I say, keeping up my end.

The trail bends a bit at this point, passing ten feet to the moose’s left before it drops over a ledge and away. I wonder if I can walk this periphery or if it will take me inside whatever zone of anxiety the moose has set for himself. Faintly, I recall that this may be “rutting” season. “The rut,” intones some guidebook from my past, “is a time of unpredictable behavior for a male moose. They are best avoided during rut, when they have been known to charge people, cars, even in an unconfirmed tale, a train.”

Well past such avoidance I slip into the stasis of wonder. Thirty seconds pass. I consider it good news that the moose continues chewing the poplar leaves he’d been stripping from the stunted trees. Who charges anything while eating?, I think. The unpredictable, I answer. I would be less unnerved if a few of these wrist-thick trees were interposed between us, and yet I know that even this small moose (I figure he weighs 400-500 lbs) could snap such trees like balsawood were he to run at them. I’ve been as close to a moose before (specifically ten ledge-supported feet above a huge, fully racked male a decade ago), but I was unobserved and the wind was blowing my scent upslope, away, as he browsed his winter diet of twigs. The unblinking stare of this minor moose keeps triggering small explosions of speculation: “What’s next? What’s next?” cries the little man in my mind who likes to be in charge.

Next, finally, is a sidestep I take to the left; the moose turns a degree to face me. I step left again; the moose turns the next degree. We repeat. Until I am the same ten feet distant but now at the point where the trail begins to depart from this grove. The moose has shifted stance for each step I’ve taken, turning about 20 degrees, and we look again across the narrow distance into each other’s eyes.

A flutter of more remembered mooseology, this from an article on wolves, their lifetime dancing partners in fully-fledged woods, heartens me. My moose is behaving just as genetic wisdom would have him: over long generations moose have learned that running from their primary predators simply exposes their flanks to attack; better to face any threat head-on with your bulk and lethal hooves. (This hard-wired strategy accounts also for the burgeoning problem of car-moose collisions on New England’s roadways. Threatened by the rapid approach of a car, a moose will face it down; drivers, applying the lessons of their own logic, expect a moose to run deerlike, or at least step out of the way. Locked in strategies with no overlap, they collide, and the car is wrecked and the moose dies.) I resume our conversation: “Well, now that worked out as it should, eh Mr. Moose?” I add the Canadian “eh” in deference to his northern roots. And then, as I turn to walk away, he too turns back to the leaves, and I watch the long, head-high shanks of his hindquarters and the young, defined muscles that shift him silently back into the poplars.