It’s raining. Once you accept that each day’s hours hold varying measures of wetness, naming the many rains becomes the only dilemma — is it hanging rain, horizontal, a floating mist that gathers along each tendril of hair or fiber of cloth? Is it sluice of sky, straight rain, the sort of water with no space in between drops? Is it murmuring water, the steady whisper of it fallingfallingfallling on leaves? Is it the spatter of secondary rain, fat wind-shaken drops that suggest John Cage or one of his disciples may be at work on the tin or tent roof above? I have been wet with all of these rains and their composite cousins.

6/5: I go north in town to these woodlands that drew Thoreau. On one of the many maps that I read and reread, it’s easy to see the two wild poles of Thoreau’s world. Take out the USGS Maynard quadrangle – below the dense markings of Concord town, there are the waters of Walden and Fairhaven, with the railroad track famously grazing the west shore of Walden, and Route 126 nosing by the pond’s east side. Now, hanging like a scimitar above the area is Route 2. These southern woods are shot with wheeled passage.

Due north, however, beyond the town, before the map vanishes on the edge of the Billerica quadrangle, there’s a green patch, shot only with the meandering hash-marks of trails and thin blue snakes of water courses. Here is our local north pole, Estabrook Woods, our edge-terra. I go here often to run and walk, to let the glad animal out of the cage of the day.

On this midday in Estabrook, as I followed the southern perimeter trail, I found myself noting the passage of recent heavy rains. A few days before in night’s midsection, we’d had some hours of “straight” rain, the sort that plummets through the windless air, seeming – there is so much water falling -to squeeze that air aside. On today’s path I could see whole mats of duff washed down any slope worthy of the name. Where the thick softness of leaves and pine needles was gone, bare dirt and stone formed a track within the path. Unconsciously, at first, then with intent, I began to follow the water’s course, giving up my linear stepping in favor of water’s way; I began to run like water. 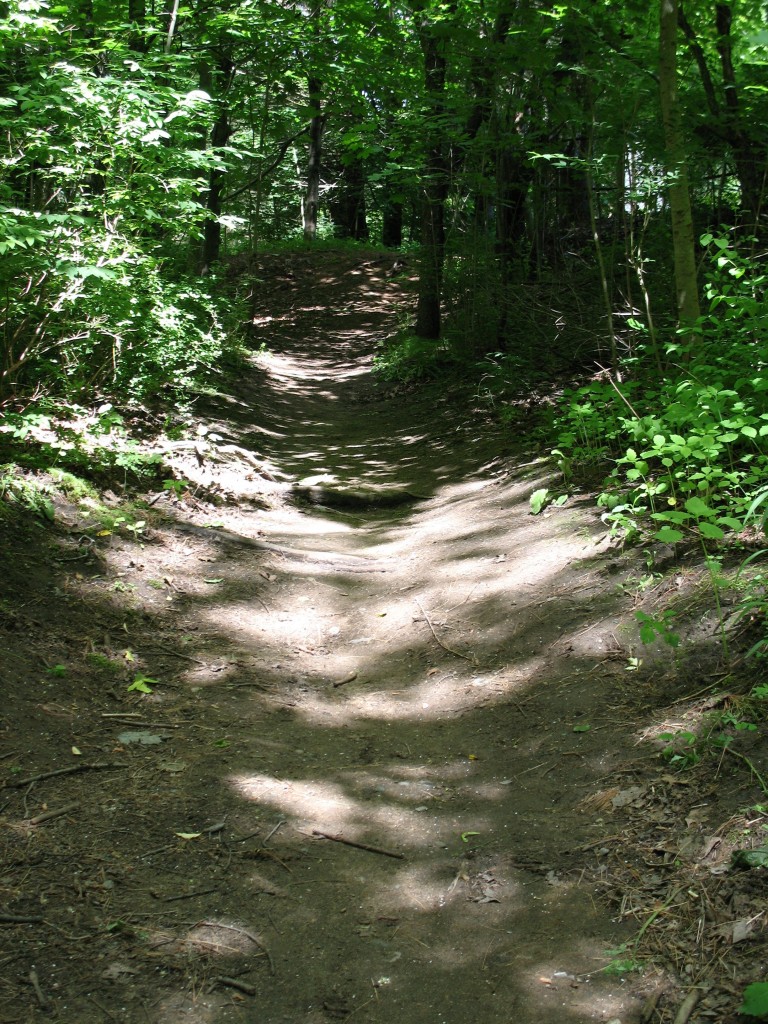 Some minutes later, I realized the easy rhythm I had found; also, my shoulders – sometimes hunched with intent when I run to “get there” – had dropped. This was not trancelike running, however; not the sort of running I sometimes fall into on the smoothness of roads. I was aware, alert, the remnant of fur on the back of my neck slightly raised, and I was reading the path’s jumbled text of roots and rocks closely. What distinguished this moment was the rightness of my footfalls – one after another, I simply was getting it right. And the water was showing me the way.

Like all stretches of human endeavor, this one was finite. But what interrupted it, as I took a walking water-break, tugging my bottle from my waistbelt and ambling-drinking along, was a different water-thought. A few days before, I’d read a New York Times piece about Auroville, a utopian, international farm cooperative in India that has made a small Eden out of once-ruined land, and near the end of the article, there was short description of one of the farmer’s practices. In mid-monsoon, when the straight-rain falls and falls, this farmer dons boots, picks up an umbrella and walks his land, noticing how the water flows and where it pools. Later he takes this water-knowledge and uses it to site small ponds and crops. In this way, he and other farmers in Auroville have stored water for dry stretches and restored the land’s water table.

Link to this story about Auroville: http://nyti.ms/13577Zk

Contrast this method with the linear plowings and greedy irrigation of much modern agribusiness, its straight lines disappearing over the horizon, its water tables and aquifers dwindling, and you can see a divergence, one that restores land versus one that drains it.

Water runs and so do I. When I follow the way of water, my running gains flow, the turns I take feel unlike deviations, but rather like good choices.

Comments Off on Water Courses