This post is joined to Henry Thoreau’s world only by his and my affinity for experience of water from a boat. As summer promises itself, floating seems a good choice. And when floating, fog will come.

“On the pond [Fairhaven] played a long [time] with the bubbles which we made with our paddles on the smooth, perhaps unctuous surface, in which little hemispherical cases we saw ourselves and boat, small, black and distinct, with a fainter reflection on the opposite side of the bubble (head to head). These lasted sometimes a minute before they burst. The reminded me more of Italy than of New England.” Thoreau, Journal, June 3, 1854

“Why does the fog go off always toward the sun – is seen in the east when it has disappeared in the west? The waves of the foggy ocean divide and flow back for us Israelites of a day to march through.” Thoreau, Journal, June 17, 1854

The fog, wispy, seeming to burn off, gathers itself, rides the south wind back in. I’m 10 minutes off Flag Island, aiming for Ragged, which puts me somewhere around 3 miles offshore here in midcoast Maine. First, Mark Island disappears; over my left shoulder Wood Island vanishes. A few minutes ago, I had considered both places. The light’s been fog-filtered all morning, and Ragged Island begins to shift toward phantasm, its back arched like a frightened cat, floating now, its darkness indistinct; now it’s gone. I pause. 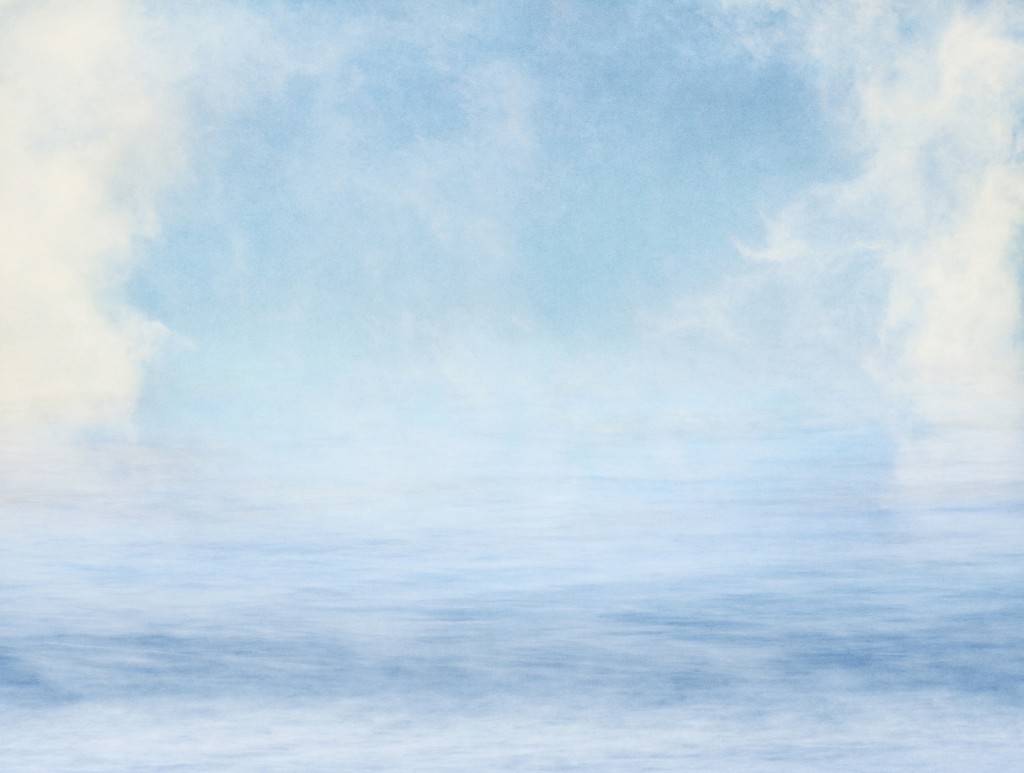 I’ve left my deck compass home. Often in warm-water summer, there’s little need of it, and you could spin me three times rapidly, and I’d still recognize every island out here. The wind’s from the south-southeast and the tide’s flowing in, pulling on the lobster buoys at about half a knot. I know the way in. On the other hand, aiming across at Ragged, out without a bearing, even though I think the fog will burn up and off, feels foolhardy; I turn to follow the tide. Visibility’s about 100 yards, plenty of time to see one of the boats muttering now out of sight.

It doesn’t burn in any way. Now I can see only 100 feet in my round, gauzy room, and I feel a clench of anxiety. The two-foot swells are lifting me and I’m paddling easily, angling slightly west of the tide’s flow to get to the ledges off Yarmouth Island (and therefore out of the flow of boat traffic on the New Meadows River). To my left and behind, muttering comes closer; then I hear the wash of water being split by a boat’s bow. The lobster boat just materializes before me: nothing’s there; then there’s 30 feet of boat 50 feet away. But he’s going very slowly, perhaps 3 knots, and I watch him glide by and then disappear; 15 seconds later his small wake reminds me he was here.

I relax. No truly big boat will be in here near this strew of ledges and out of the channels; no one here will be revving his engines and seeing kayaks as speed bumps. As if to prove my point a cabin cruiser appears from my left — quieter engine, it is even more ghostly. Its course is wobbly. Whoever’s got the helm seems nervous at the way the world has disappeared. I doubt they see me hanging here in the fog’s edge.

And so I am left to myself for long minutes. When I check my watch and find that only 20 have passed since I turned in, I’m puzzled — that seems so wrong; I should be getting somewhere. The swell raises me, lowers me; the few buoys I can see point the way; still, I begin to doubt them.

And yet it’s also pleasant here in my little room of fog. I feel drifty and need to remind myself to pay attention. A steeper swell that lifts and skews my boat to the left, forcing me to a mixed high brace and sweep, helps. So too does the sound of breaking water. In front of me I see a slice of white sea. “It’s far enough away,” I say aloud. I ease left and only as I’m level with the ledge do I realize that I didn’t miss being lifted on to it by more than 10 yards. Good thing the swell stayed at today’s two feet; a four-footer might have broken early enough to take me for a rocky ride. The streak of adrenaline this shoots through me wakens me to the fog’s lull. I know there are more ledges out at this half-tide because I am aiming for them.

I have been in the fog long enough to stop straining to see. A form of acceptance has spread through me. Already it’s been longer than I thought it would be, and no bulk of island has darkened the steady gray in front of me. “I will get there when I do,” I say aloud again.

When land appears, it’s unrecognizable. Where am I? I wonder, and yet I know I can’t be far from Yarmouth Island, though it’s also clear that I’ve been far from Yarmouth Island. I finally rotate the map in my mind to admit little Raspberry Island and see I’m just to the east of the Quahog Bay boat channel, along which I see three sailboats creeping in under motor-power. I land and watch the boats ease by, nearing safe harbor. A lot of people have been surprised by this fog, it seems.

The fog pulls out with astonishing speed, like a dream breaking up; the Elm Islands, more than a mile out from me are suddenly there, sharp-edged. Then, just as quickly, they’re gone and the light has become indistinct again.

Summer’s here, but who can track time in the fog? Has the whole season passed in this morning of it? What have you found in fog?

Comments Off on Boat Days