Surprise in the Sky

Posted on June 19, 2013 by Henry Thoreau | Comments Off on Surprise in the Sky

It was a bright and sunny day in the middle of May, almost a month ago. I was walking along the Yellow Trail at the Albany Pine Bush Preserve in New York. I had been invited to the site to speak about Henry Thoreau at the annual Lupine Festival. Henry had passed this very property on his way to Minnesota in 1861. He jotted down in his field notebook that he saw signature pitch pines in the area. In fact, the railroad tracks he rattled over lay just beyond the route of this particular footpath. So I spent more than an hour out in the woods by myself before my talk, looking around and taking photographs.

I had hoped to get a glimpse and a photo of the rails. But the summer vegetation was already in full unfurl; if the tracks came close to me, I missed them. I needed a few shots of pitch pines for my presentation, however. So as I approached some of the tallest specimens in the clearings, I stopped and leaned back and looked up. I drew the camera to my face, aimed, and pressed the shutter button. Click.

And that’s when I saw something else. A complete and seamless rainbow-ring around the sun. A helio-halo. I’d never seen one before. Truth be told, I didn’t even know they 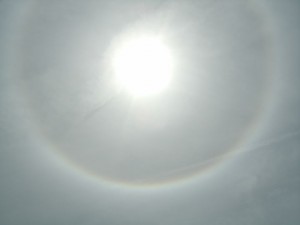 were possible. I was familiar with sun dogs, when small prisms glow on either side of the sun in wispy clouds. And I’d seen a frozen white ring around a full moon on many a cold and crisp winter night, especially in New England. This must have been the daytime equivalent. It was huge. It was more than a little scary to my omen-ready mind. And it was nothing short of amazing.

I moved along and appreciated the spring wildflowers and ferns on the forest floor, but each time I came to an open area, I put my head back and squinted. No matter where I walked, I could still see the sun-halo. I took a few more shots of it, and included some greenery and a few flood-deadened trees in the frames, not knowing whether any of the full-on images I had snapped would turn out well. Taking pictures of the sun can be difficult.

As the minutes passed, I pondered this phenomenon. Was it truly natural? I knew that a major landfill was close by; and for a time I wondered if some noxious outgases from its waste material might be skewing the chemistry of our immediate atmosphere. (Why was my initial impulse drawn to a malicious cause?) When I returned home later, I did some online research and found this not to be the case. I learned that sun halos were relatively common; and like sun dogs, they are caused by the sunlight shining through ice crystals in cirrus clouds. I also learned that people along the New Jersey and New York coastlines had seen sun halos several days beforehand, during Prince Harry’s visit to the Sandy-stricken region.

When I returned to the nature center to update my slides, I asked a few visitors if they had looked up at the sun and seen the halo. Only a few of them had. The naturalist who was my festival contact confirmed that she’d seen it and that she had also told several people about it.

But why didn’t we make a general announcement? Why didn’t we grab all of these visitors and demand that they turn their heads skyward? How many people missed this marvelous and 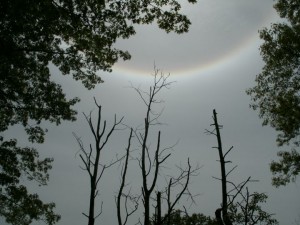 totally free masterpiece, merely because they weren’t paying attention? Sure, the stars-of-the-day lupines stood in bluish-bloom near the parking lot, and they were indeed beautiful. But something else was even more stunning, and it soared overhead.

Thoreau would have admonished them: “To be awake is to be alive.” (Walden) And: “We have always a resource in the skies. They are constantly turning a new page to view.” (Journal, November 17, 1837)

Too, too often, we don’t look up. We attend to matters at our own level. And when we walk, we’re more apt to look down at our feet than to lift our chins up and to scrutinize the sights above our heads.

When my talk was over and I headed for my car, I looked up at the sun again. The halo had dissipated. But I smiled, remembering its supernatural glow. I was proud to have witnessed it. And I have the photos to prove it.