A Tale of Two Books

Near the end of his life, Henry Thoreau understood that his time was limited. He worked with his sister Sophia for more than a year to firm up some of his manuscripts for posthumous publication. He died in 1862. Four books — Excursions; The Maine Woods; Cape Cod; and A Yankee in Canada, with Anti-Slavery and Reform Papers — were released soon afterward.

These details came to mind when I spied copies of two of these volumes on a shelf at Mullen Books in Columbia, Pennsylvania. I had started working at this used and antiquarian bookstore in March 2013. Naturally, as a Thoreau fan, I searched the store catalog for Henry’s name first. I was amazed to find originals of Cape Cod and A Yankee in Canada in stock. I touched them, opened them, and studied their markings. Both had come from Delaware and had interesting ownership stories to tell. 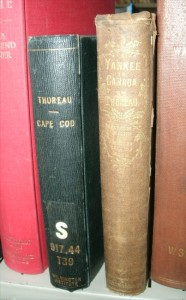 The Wilmington Institute purchased the copy of Cape Cod after it was issued in 1865. By then the Institute already had more than five thousand volumes in its collection. It also served as an education center for local tradesmen.

As the next century approached, the Institute became the Wilmington Public Library, a free service for all citizens. More and more people borrowed and read its books. Eventually, a librarian saw that Cape Cod looked a bit ragged. The book was rebound with a new durable blue cover. The words “Thoreau” and “Cape Cod” stood out on the spine. Then the book was ready to be circulated again, with a fresh face.

In 1944, local antiquities collector and benefactor Titus C. Geesey donated his 1866 edition of A Yankee in Canada to the Wilmington library. It still carried its original gold cloth cover. The spine credited Thoreau as “Author of Walden and A Week on Concord River.”

Library services continued to grow and expand. In the second half of the 20th century, Wilmington’s staff created a closed stacks section for its oldest books. The aging, original copies of Cape Cod and A Yankee in Canada were both relegated to these shelves. Fewer people had access to them now, though they could still be checked out upon request.

In the 2010s, the Wilmington library launched a “Library of the Future” capital campaign to renovate and update its facility and services. The old stacks section was due to be eliminated entirely. Regional museum representatives were invited to retrieve worthwhile titles from the collection, so that they could add them to their own. The library held at least one book sale, too. Finally, Pennsylvania bookseller Kevin Mullen was invited to scrutinize the shelves and to “rescue” and purchase as many volumes as he wished. Mullen spent nine days assessing the books and putting aside the ones he wanted. The copies of Thoreau’s Cape Cod and A Yankee in Canada were among the thousands of books that filled his truck as he drove back north across the border. He knew that whatever had been left behind at the library would soon be discarded.

Kevin’s employees spent months cataloging these new arrivals. Now it wasn’t just the contents that created value. It was a matter of condition as well as supply and demand. How many copies of each one were already on the market? What shape was each volume in? How much money would people reasonably pay for them? Descriptions and prices were entered into the store database. Cape Cod was offered at $150, A Yankee in Canada at $90. The details were published online. Anyone in the world who was looking for original Henry David Thoreau volumes could land on these entries.

Each time I catch a glimpse of these two books on the shelves, I can’t help but think and wonder. How many households did they visit? Whose hands held them? What did their readers think of Mr. Thoreau? Did any of them go on to read more of his writings? Were any of them inspired to later visit Concord, Massachusetts, and to see Walden Pond for themselves? Or Cape Cod? Or Montreal?

And what will be the next chapter to this story? Where will these books go from here? Like their author, these volumes have travelled a good deal throughout one locale. But it seems to me that they may have many more lives to live … and to touch.

2 responses to “A Tale of Two Books”