Posted on April 9, 2013 by Sandy Stott | Comments Off on Winter’s Last Walk

This walk begins tentatively. Plenty of snow remains in these hills, and I wonder how a slow-healing tendon will respond on slippery uphills. Still, the winter-blue sky and the hundreds of story-rings from this 5-mile loop insist that I try. “Take short strides,” I say to myself. “Scuff your way up in the sun-softened snow.”

And, to reach Oregon Mountain’s top knuckle, I have done just this, booting along for the first few miles and then strapping on clawed snowshoes for the climb onto the ridge. Along the way my only company has been the meandering tracks of moose, who have been browsing the trailside brush and trees for their buds in this deep winter. Thin fare, I think, as I look at the spiky, gnawed-off branches and twigs.

So much in this 5-mile loop: the strata of a thousand memories, jumbled like quake-shot earth, one poking through here, another there; swirl of more memories beneath, a molten core; audible, in the heart of this pocket of wild, the chorused howls of wolves and wolf-hybrids from a sanctuary set there five years ago; to the north, the white triptych of Mt. Moosilauke, the Franconias and Mt. Washington, and along the Tenney Ridge and one a little farther north, the outsized stalks of wind turbines, their blades slowly rotating in the day’s northwest wind; and below the ledges, on the way down, losing the old trail in recent logging before faintly recognizing the little drainage that curves around the outlook and striking its path above Cream Hill. 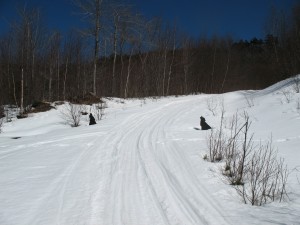 Track to the Wolf Sanctuary

For once, I have slung my camera around my neck and left arm, where it is accessible, making a small album of walking. These are the word-shots to go with them: snow-machine track for the first mile and half; the wolf-folk have hung on through another winter; where the sun catches it, the track’s soft; in the shade it’s icy. At the turn up the Old Dicey Road, my back is to the sun, which means the track is sun softened as it steepens – perfect for booting along; no need for snowshoes yet. This track is already reverting toward woods, even as the land around has been laid bare by two spates of logging in the last ten years; ten-foot high birch and poplar crowd the track to trail. The sky is a deep blue, the snow unsullied white. I am back. 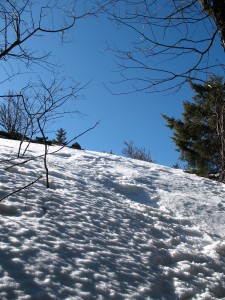 On a sun-opened ledge, I prop myself against my pack and close my eyes. The northwest wind hurries by at about 20 mph, and the temperature must be in the 20s as well, but the April sun offers a perfect thermal balance; I drift off to the voice of that wind in the stiff firs that endure here on Oregon Mountain’s summit. Two thousand three hundred and one feet above sea level the sign says. Not exactly alpine, but here, on this seldom-visited ridge in midstate New Hampshire, I am finally “up there” after a long season of being down and away. 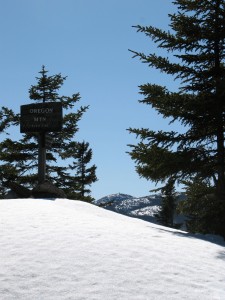 I awaken with a small start, prodded perhaps by the unlikely dream of a mountain lion. There they are, my home mountains, Cardigan and Firescrew, stone duo humped in the west, faces shot still with snow setting off their stubble of firs. What or who better to awaken to? Again…I am imprinted on these two. Should they stand suddenly and begin to walk west, or north, toward their brother and sister hills, I would follow. 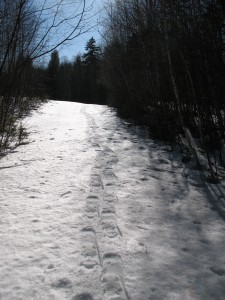