Juxtaposed – Walking and Thinking Near Boston 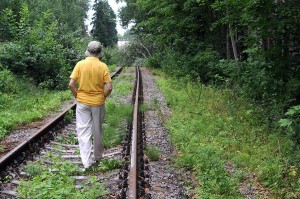 Late afternoon and the gray, pillowed sky and gusting wind say there’s a cold front on the way. But as I walk to the river and its trails, the temps are in the low 70s, and the wind has no teeth. On this edgy day, with school cancelled and the extended city of Boston locked down, I need the air and the motion of walking.

It turns out that I also need the marsh marigolds that cluster newly blossomed on the bank of the flood plain; I need too the red-tail that drops from a white pine directly above near the trail’s beginning; his wing span as he glides over a small field is broad enough to summon comparison, and as I seek it, looking up into his white underside and fan of red at the tail, I see the thumb-sized, brilliant yellow shape of the first goldfinch. The hawk is gone; I walk out along the berm of the old railroad right of way, aimed for the breach that lets the river through.

But despite this wild-gilded entrance, my walk will not be about the riverine world. I carry with me the album of images from the past few days – mayhem in Copley Square, people scattering, and then the frozen likenesses of those sought for the bombings and those seeking them. And then there are the backstories, including the banal and eerie tweets from the man who began his news cycle as Suspect #2, his dark hair swelling from beneath a backwards, white ballcap.

Henry Thoreau thought a walk spoiled when he couldn’t outpace the town and its news, when his mind couldn’t shed them, and I suppose my walk can now be classed “spoiled.” But here amid the pines and oaks and along the blackwater river, I can exhale…My thoughts begin to arrive singly rather than as the bunched jumble of a website. I am wondering about announcement, about how we announce ourselves.

All announcement is imposition of some sort, even as it seeks linkage and affirmation with like others. A few birds are singing in this deep wood, announcing both territory and presence; it is both warning and invitation. If, as seems likely to me as I walk, some fanaticism lies behind these announcement-bombs, I wonder how the conviction took hold and deepened to the point where a whole unknown swath of people could become its aimpoints. How do people become so much the “other” that they are simply ways of announcing oneself…or one’s imagined divinity?

And then I begin to wonder about the odd, and, at times, hopeful experiment of having a country composed of immigrants, of forming a “we” from so many “others.” Surely, I think, as I turn along the far side of my loop and head back for the river, such a “we” avoids the problems of sameness, of monoculture of myopia. But amid the cacophony of announcement and the counter-currents of histories and beliefs what commonality do we sing?

In the floodplain the redwing blackbirds are squalling, and the sky has come lower and darker. They will nest; it will rain. I walk along slowly, almost slowly enough so that each step is singular. But at least there is space enough between my thoughts to count and consider them as I turn toward town, toward “we,”  where it’s clear I’ll face these thoughts again.

Comments Off on Juxtaposed – Walking and Thinking Near Boston