Corinne H. Smith serves as a weekend docent at the Thoreau
Farm Birthplace and is the author of “Westward I Go Free: Tracing
Thoreau’s Last Journey.” For more info, visit www.corinnehsmith.com
or www.thoreausjourneywest.com.

In mid-September, something changed in the air. Night-time temperatures dipped into the 40s. People were coerced – with some resignation — into closing their bedroom windows and switching cotton sheets for flannels. A week before the equinox, we could feel Fall coming on.

We weren’t the only ones. The chipmunks who live in the stone walls around the Thoreau Farm took the change to heart, too. They were spurred to action. These creatures have only two major concerns in life: having a big enough food supply for winter, and making sure they don’t become food for somebody else. A quick inventory of their storage chambers must have proven that they needed acorns ASAP, because they spent the weekend of September 15-16 in a blur of harvesting in the red oak in the front yard of the birth house. I had a ringside seat for the frenzy.

We’ve already come to an agreement, these chipmunks and I. I don’t make any sudden moves or noises, and they in turn try to ignore the fact that I like to sit on a chair dragged into the middle of their path, two days a week. While I wait for visitors, I catch occasional glimpses of a small tawny body or two, zipping through our kitchen gardens. More than once we’ve arrived in the same spot at the same time, and have both squealed with surprise. What can I say? It’s Nature’s entertainment. 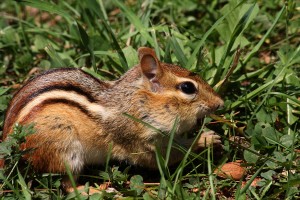 But there was no funny business about the chipmunks that weekend. Three of them repeatedly ran the perimeter of the house, grabbed as many acorns as their mouth pouches could hold, and hurried back to their tunnels under the walls. Only a short time passed. Then they were out and running again, around the building, under and even up into the tree. It took about two minutes for each one to load up and to return to headquarters. Over and over. Again and again. They used the same route each time, always circling clockwise around the house, with a midpoint stop at the oak. But what would a chipmunk know of the hands on a clock? Still, they followed the pattern. If a shadow happened to cross from overhead, they paused and hid under our beans or Swiss chard. As soon as the blue jay or mockingbird moved on, so did the chippies. This otherwise nonstop action continued for hours.

Henry Thoreau observed the autumnal habits of these little ones, though he called them by a different name. “What a busy and important season to the striped squirrel!” he wrote on August 29, 1858. “[He] is already laying up his winter store.” The air must have changed earlier that year. Three days later, Thoreau ruminated on the fact that since hazelnuts grew along stone walls, the chipmunks had “not far to go to their harvesting. … As we say, ‘The tools to those who can use them,’ so we may say, ‘The nuts to those who can get them.’”

The Thoreau Farm chipmunks left a wake of non-nutritious acorn caps in the lawn. I watched one guy as he nibbled enough of the nut so that the cap could slip off, intact. Certainly the cap’s sole purpose was to attach onto a branch. It was waste that would take up too much room in both mouth and house, and thus it was discarded.

As an avid lover of metaphor, Thoreau once saw in the chipmunk’s stripes “a punctuation mark, the character to indicate where a new paragraph commences in the revolution of the seasons. Double lines.” For me, on one September weekend, they indeed marked the division between Summer and Fall.