The shadow is small, but for a long time I’ve been attuned to any darkness that crosses the ground or water in front of me. And so I glance up and see the flickering wingbeats, the erratic glides, the glow of orange outlined in black. This is the third monarch to cross above me in the last few minutes, and, as it diminishes, then vanishes into the southwest, I begin to wonder. 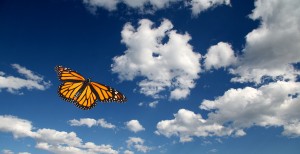 It’s been five boat-miles on a day when we have run under the seam of two weather systems – to the west, blue sky; to the east, clouds of varying thickness and height, the tail-end of the cold front that passed over last night. So the light has been superb, the water painted with colors from grey-green to lavender and blue (these to the east). We have been spectacle for seals – curious periscopes, they’ve often bobbed not far away  – and by now overhead upwards of a dozen monarchs, migrating one by one to the southwest, perhaps picking up the front’s early modest breeze from the north, though that has faded quickly. On French Island – our landing point for the day – as I water the bushes, I keep hearing a fussy sound, and the leaves of the sumac shake and rustle. Finally, a warbler shows herself, the pale yellow throat and olive head going brown. For some reason this sighting and closeness make me brim with happiness; out on the bay, it is high tide. 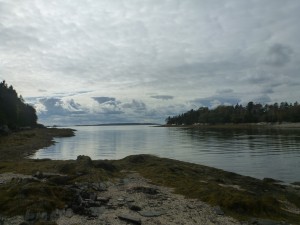 We lift our boats down to the water, put on spray-skirts and PFDs and point for home; it lies now to the northeast across calm water. This will be a leisurely trip. And still, every few minutes, a small shadow appears, aiming at the brightly-colored imperative that is Mexico. The southwest, I think as I press my paddle through the autumn-clear water, was also Henry Thoreau’s favored direction, the one he chose often after letting the compass needle of his intent settle before setting out on his daily walk. But for Henry the southwest was the direction of the future, the way forward in a linear sense. For these small kings of the air it is the way to their winter home, its air-soft path worn by countless generations.

I feel the tug of separation as my paddlestrokes send me forward; I am on a different route. Yes, I turn toward home almost every evening; my days are circles. But I see my life as a line aimed out at some unknown point. On a good day, it feels like a progression, perhaps a rolling forward of a daily round. And still, I look up in wonder at the certainty of each little shadow cycling the other way.

Comments Off on Across the Sea