June 10th: It’s a short drive from home to the site of the Captain William A. Fitzgerald USN, Recreation and Conservation Area in Brunswick, Maine. A few years ago the US Navy decamped from Brunswick, and this is one of the parcels of land that reverted to the town after more than 50 years of Navy use. It’s an open, rumpled landscape of sand and grass and brush, stippled with some pitch pines, and now is the time to help it toward the sand-grass plain it wants to be, naturally.

So five of us, working as the town’s Conservation Commission, arrived at the battered gate, took the old access road in and pulled up at the evening’s work – a clump of invasive knotweed. The weed, first brought to North America as an ornamental in the late 19th century, was well rooted, and, from its stand, clearly eyeing the acres of open ground around. We were doped for bugs and tick wary, and we had our cutters and loppers ready to have at the knotweed. 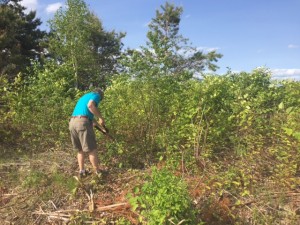 Having at the knotweed.

The setting – former naval base – the term “invasive, and our “attack” on it had cast my mind in a military set. As I reached a thumb-thick stalk of knotweed that rose to head height before me, Henry Thoreau flashed to mind. He too did battle with invasive weeds, though their invasion was not a trans-oceanic one. Still, as he labored among his beans during year one at Walden, he joined with the weeds that would crowd out his beans; he went at them with fervor:

A long war, not with cranes, but with weeds, those Trojans who had sun and rain and dews on their side. Daily the beans saw me come to their enemies, filling up the trenches with weedy dead. Many a lusty, crest-waving Hector, that towered a whole foot above his crowding comrades, fell before my weapon and rolled in the dust. -Walden

Ah, the mock heroic. And yet, in its dailiness, in its usualness, the real heroic too. This work of helping the land say, Beans, or, in our case, Grass, is part of the cultivation that forms culture, that, in the long run, helps us “to know beans.”

I sized up this knotty Hector and cut him down. 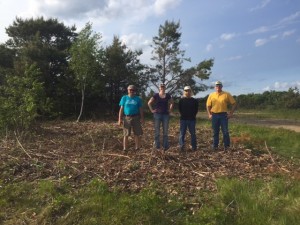 The troop at ease, where the knotweed once stood.

Well, all this metaphorical battling is a bit bloody for what we actually did, but just as Thoreau came “to know beans” through his close contact with them, we too came to know knotweed. And that brought me a little closer to knowing the variousness of this piece of land and what it might become. And I gained also a sense of knotweed’s tenacity and power. We may have leveled this stand, but clearly, the weed would be back for another round.

So too would we. 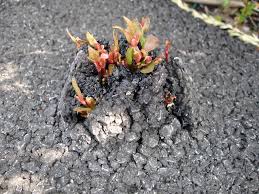 A powerful weed, a worthy foe.

Comments Off on Knotty Work

Fantastic Beauty in the Front Yard

Yesterday morning, while I was pushing my granddaughter Verona on the swing in one of our large cedar trees in front of Creekside, I noticed a sudden flash of yellow against the striated brown bark of the tree’s massive trunk. As I drew closer, I could see that it was two Imperial Moths (Eacles imperialis), beautiful members of the silk moth family, the group that produces the largest moths found in North America. These two were clearly mating, joined at the hind-parts and perfectly still, presumably waiting in their nocturnal way, at least for the sun to go down. 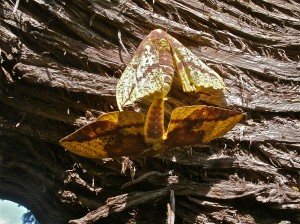 Moths can take a full 12 hours to mate. The male’s goal is to pass a spermatophore into the female’s body, so that she can then fertilize her eggs. He has located her by sensing her pheromones in the nearby air and then flying toward the source until he locates his partner. Once together, the moths unite by backing up, abdomen to abdomen until they are firmly joined. Then the male clasps the female with small, finger-like appendages– “claspers”–so that the two can remain connected, even if they have to move from one spot to another during their prolonged “romance.” Research indicates that a mating pair like this, hooked together and unable to separate until their work is done, are especially liable to predation, often by raccoons and other small forest mammals.

These two insects that Verona and I watched today were gorgeous and large examples, a full five inches across from wingtip to wingtip, the female slightly larger than the male. Their bright yellow wings were patterned with a brown that almost shaded to purple; they had a thumb-thick and sharply segmented abdomen, and a wide, furry head and face. The female has a unique–if invisible–anatomical feature, her “bursa copulatrix (literally, organ for “exchange coupling),” where she will store the spermatophore that she receives from the male. This tiny packet of his genetic material also contains nutrient materials to keep the fertilized eggs supplied with “food” in her body, not unlike the way an egg’s yolk and white support the growing chick.

Here is how complicated and technical the entomologist’s description of the Imperial Moth can get: “Both sexes have round, purplish to reddish-brown reniform and subreniform spots on the forewing, the center of each spot filled with gray; as well as a similar discal spot on the hind wing” (this drawn from the Massachusetts “Natural heritage Endangered Species Program”). The last century has seen a dramatic decline in species range and numbers so that now, in Massachusetts for example, the moth–which once covered the state–is only found on Martha’s Vineyard Island and occasionally on the nearby mainland. In our part of Pennsylvania the decline is less pronounced, but the Mason-Dixon line seems to be the dividing line: Imperials in Maryland and south tend to be doing much better than their northern kin.

So there we were, on a warm July afternoon with a single species of declining moth, bringing knowledge to me and wonder to my wide-eyed, three-year-old grandchild. “What are those two moths doing, Baba,” Verona said, with her eyes still wide and staring. “Well, my little girl, they are resting . . . um, ah, ” pause, think, speak: “and they are starting to make babies for the next generation . . . I, uh . . . I mean for their next family of beautiful moths.” “They ARE beautiful, Baba,” Verona said as we turned to come into Creekside to get the camera.

This morning I returned and the pair was gone: he to feed and hopefully to survive a few more months until winter, she off to lay her fertilized eggs and begin their remarkable metamorphic moth lifecycle again.

On a huge abandoned tractor tire, in the scrubby woodlot back behind the house, I find a jet-black wooly-worm style caterpillar, as long and as thick as my thumb, his prickly bristles pin-sharp to the touch. An hour later, I return to the spot and he is gone, having wandered off somewhere to weave his thick cocoon, hiding deep in the dark underbrush that separates one large farm field behind us from another.

My field guide tells me that this is a Giant leopard moth larva, Hypercompe scribonia (archaic: Ecpantheria scribona), a member of the family Saturniidae that ranges from southern New England to eastern Mexico. These are among the largest of all moth species in North America, and the family includes such beautiful giants as the luna moth, the cecropia silkmoth, and the two-eyed Polyphemus moth. We used to catch these and mount them in cigar boxes when I was young, amazed at their size and wild coloration, stunned by their furry antennae and always wondering at their astonishing lifestyles. 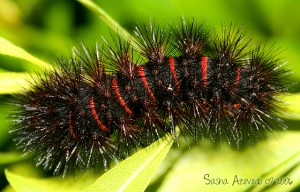 This caterpillar has hibernated here in our woodlot all winter, and now that it is one of the first warm days of April, he has emerged from his underground hiding place to feed for only a few days. Then he will get to his busy work, forming a dense and silky cocoon in which to metamorphose (what a verb!). He will emerge from his chrysalis stage in two or three weeks, now a fully-formed moth, ready to fly off and find a mate, fully developed and prepared to continue a life cycle that has been going on for who knows how many millions of years.

How can this small creature change so much—from this prickly black and red larva to a delicately winged flying machine—and how can this change possibly happen so quickly; it takes less than a full month. Where do his caterpillar body parts go? What happens to all of those prickly spines and those jagged caterpillar mouthparts, what becomes of all of those wooly worm legs? There were certainly many more than six of them. The adult moth will have just six perfectly formed legs. And what about the bright red rings that marked off his caterpillar segments; where have they gone? Where have all of these earlier parts disappeared to in their cocoon stage?

He emerges from his cocoon as a beautiful black and white adult with shining blue and yellow stripes on his abdomen. Sometimes this iridescent blue—almost a sapphire shiny blue—continues as spots on the top and back of his head. Such metamorphoses remain one of the truly great mysteries of nature. What genetic forces, what chemical combinations, what signals from chromosomes and developmental triggers transform that jet black and fire-engine red caterpillar into this stunning adult creature, with its delicate white wings, its fat orange abdomen, and its oh-so-sapphire blue spots. I do not know.

In his Journal for February 19, 1854, Thoreau says that it is the “mind of the universe” that is responsible for the creation of each moth’s cocoon, for the fashioning of “each particular object.” He adds that, “a kindred mind with mine” determines “how cocoons had best be suspended.” As for me, I just wonder as I wander. 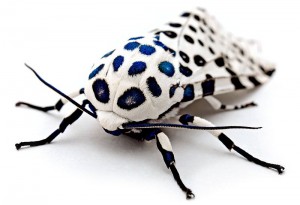 Ashton Nichols holds the Walter E. Beach ’56 Distinguished Chair in Sustainability Studies in Environmental Studies and Science and is a Professor of Language and Literature at Dickinson College.

Comments Off on The Giant Leopard Moth